The Strange German Disease Called "Kevinism": Can a Lame Name Mess Up Your Life? 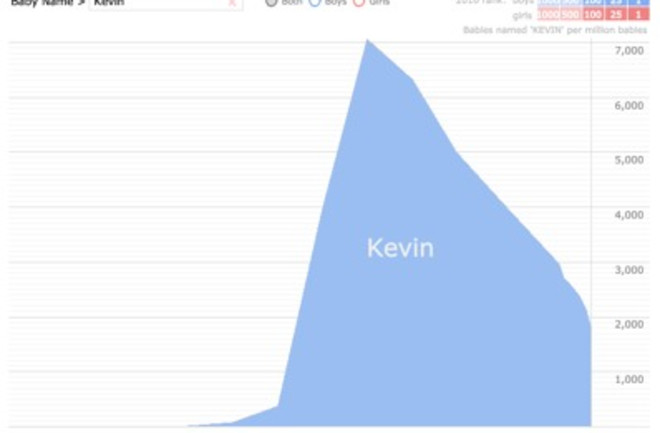 Young German Kevins are a few decades behind the U.S. trend.

Another day, another crazy German noun: Kevinismus, which basically means, "You're named Kevin? Sucks to be you." According to a study of interactions on the German dating site eDarling, online daters don't even bother to click on the profiles of users with names that seem foreign and gauche to German ears, like Kevin. The authors suggest that this online neglect due to their unpopular names mirrors lifelong social neglect, which is also responsible for making Kevins smoke more, get less education, and have lower self-esteem.

That all sounds quite dire, but we're gonna have to bust out the "correlation does not imply causation" card here. While exotic baby names may seem like a disease that most commonly afflicts celebrities, in Germany it's really about the other end of the economic spectrum. An article on Kevinism [note: this article contains a lot of German] in Die Welt quotes sociologist Jürgen Gerhards, who asserts that Anglo-American names (Mandy, Justin, Angelina to name a few more) are a lower-class phenomenon. It seems that no one has actually crunched the numbers to prove that, but jokes like "Only druggies and Easterners are named Kevin" suggest he's on to something. (Any Germans want to weigh in?) It seems very possible that German Kevins' smoking and lack of education has as much to do with their family background as it does with their name.

Several years ago, Freakonomics popularized a study on the causes and consequences of black- versus white-sounding names, whose key conclusion is that parents who name their kid Jake are quite different from the parents who name their kid DeShawn. Yes, Jake will probably be more successful, but he is also likely to have had wealthier parents and grown up behind a white picket fence. In short, name is a sign, more than a cause, of difference. There may be a similar distinction between Kevin and Alexander, the most positive name according to the German study. The authors excluded all non-white-seeming names to get around potential racial bias in their dataset, but the socioeconomic problem remains entangled. While the paper claims to have controlled for economic class, self-reported income on online-dating profiles is, well, notoriously unreliable. It also uses a person's own income rather than parental income, which is a better indicator of the socioeconomic class someone grew up in.

So if you're named Kevin, that probably won't hold you back much. But then, that also means you had parents who were the type to name you Kevin, which is another story.

At least in Germany.

Image via The Baby Name Wizard

More From Discover
Health
Could COVID-19 Be Changing Who We Are?
The Sciences
Was Nefertiti Egypt’s Leading Lady Before King Tut?
Planet Earth
These 5 Animals Trip on Psychedelic and Psychoactive Drugs, Too
Planet Earth
We’ve Been Worried About Overpopulation for Millenia
Technology
What’s Dynamic Pricing? An Operations Management Scholar Explains
Health
Decorate For the Holidays Early and it Might Improve Your Mood
Recommendations From Our Store
My Science ShopDiscover STEM Kits
My Science ShopDiscover 2022 Calendar
My Science ShopStrange Science
My Science ShopElements Flashcards
Shop Now
Stay Curious
Join
Our List