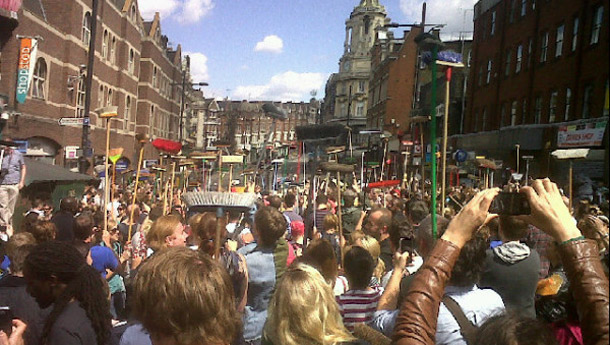 Yesterday, I watched as hundreds of Londoners took to the streets in a heroic attempt to clean up the mess caused by rioters and looters the night before. Looking at pictures of large crowds getting off trains with cleaning equipment in hand and marching down streets with brooms held aloft, I've rarely felt so proud of my city. The clean-up operation was a great move - a positive note in an otherwise depressing week and a chance for a beleagured capital to come together and reclaim its sense of community. But the act of cleaning away the preceding day's damage was also important. To explain why, I'm reposting this piece from a few years back about a Dutch study which showed that signs of disorder only breed more disorder. To clarify, this is in no way an attempt to explain the psychology of the riots themselves; it simply suggests another reason why the clean-up operation was a smart move.

Imagine walking through a neighbourhood and seeing graffiti, litter, and shopping trolleys strewn about the place. Are these problems to be solved, or petty annoyances that can be ignored in the light of more serious offences? A new study suggests that the former is right – even the most trivial of transgressions can spread and spiral because their very presence stimulates more of the same behaviour. Through a series of stunning real-world experiments, Kees Keizer and colleagues from the University of Groningen have shown that disorder breeds more disorder. The mere presence of graffiti, for example, can double the number of people who litter and steal. Their study provides strong support for the controversial Broken Windows Theory

, which suggests that signs of petty crimes, like broken windows, serve as a trigger for yet more criminal behaviour. It follows that fixing small problems can prevent the build-up of bigger ones and the gradual decay of a neighbourhood. The idea was first proposed in a magazine article published in 1982, but soon became the basis of many a social policy. It inspired Rudy Guiliani’s Quality of Life Campaign in New York, which focused attention on seemingly trivial fixes such as removing graffiti, clearing signs of vandalism and sweeping the streets. The campaign seemed to work, which motivated other cities to try the same tactics. But despite its popularity, the Broken Windows Theory still divides opinion, for it lacks the backing of hard evidence, it’s plagued by woolly definitions of “disorder” and critics have questioned its role in New York’s drop in crime. These are fairly hefty shortcomings for a concept that is so central to anti-crime measures and Keiser wanted to address them once and for all. To do so, he took to the streets of Groningen and watched unknowing passers-by in real-life situations as they reacted to signs of disorder. The recurring question was this: would people exposed to inappropriate behaviour behave in a similar way themselves? He began in an alleyway in a local shopping district, where bicycles are commonly parked and where a conspicuous red sign warned against graffiti. He attached a flyer from a fictional sportswear shop to the handlebars of parked bicycles and watched what people did as they returned to their rides. Under normal circumstances (picture on the left), most people took the flyer with them and just 33% littered by throwing it on the ground. But that all changed when Keiser covered the wall with graffiti (picture on the right). With this innocuous difference, the proportion of litterers doubled and 69% discarded their flyers on the street.

Keiser explains this behaviour in terms of “social norms

” – the rules that separate appropriate behaviours from inappropriate ones. Problems arise when our view of what is common (in this case, graffiti) fails to mesh with our understanding of what society expects (as epitomised by the “No Graffiti” sign). Graffiti is frowned upon, but the covered walls send a message that it is common and therefore, more acceptable. Keizer calls this the Cialdini effect.

To see how far its influence would extend, he set up a temporary fence in front of a car park. He attached two signs to the fence, one banning people from locking their bicycles to it, and another saying that entry was forbidden and asking people to use a detour some distance away. When he placed four bicycles a metre away, just 27% of people disobeyed the detour sign and squeezed through the gap in the fence. But when the bikes were locked to the fence, in blatant disregard of the first sign, 82% of people ignored the detour sign too. With one rule broken, the other followed suit. A third related study took place in a supermarket car park, where prominent stickers asked shoppers to return their carts to the main building. Keizer plastered various cars with the same flyer from the first study. If the garage was clear of carts, just 30% of shoppers littered with the flyer, but if four unreturned shopping carts were left lying about, 58% did so. Again, when people saw that one rule was broken, they felt less strongly about following another.

Together, these three experiments show that signs of disregarded rules can spread to affect commonly held behaviours (“don’t litter”) as well as specific requests from third parties (“don’t enter” or “return trolleys”). Signs of disorder don’t even need to be seen to have such influences – they can be heard too. In the Netherlands, most people know that setting off fireworks in the weeks before New Year’s Eve is illegal and carries a small fine. Keiser found that he could trigger people to litter more frequently by giving them audible evidence that this law had been flouted. Again, he attached a flyer to bicycles parked near a train station. Under normal circumstances, 52% of cyclists littered but if they heard the sound of fireworks let off by Keiser at a nearby location, that figure grew to 80%.

For his final and most dramatic demonstration, Keiser showed that the mere presence of graffiti can even turn people into thieves. He wedged an envelope into the slot of a mailbox, with a 5 Euro note showing in the transparent window. If the mailbox and the ground around it were clean, just 13% of passers-by stole the envelope. If the mailbox was covered in graffiti, or if the ground around it was covered in litter, the proportion of thieves doubled to 27% and 25% respectively. Keiser thinks that it’s unlikely that people inferred a reduced police presence by the presence of litter or graffiti – certainly, litter is generally tolerated by the police in Groningen. Instead, he thinks that one transgression was actually fostering another. This isn’t a simple case of imitation – littering doesn’t just beget littering. Keiser’s idea is that seeing the breakdown of one social norm makes it easier to ignore others, by weakening our general resolve to act appropriately and strengthening our temptations to act in our own self-interest. All in all, the suite of experiments, all in a realistic setting, provide powerful evidence that the Broken Windows Theory is valid and all of Keiser’s results were statistically significant. Small, petty signs of disorder can indeed turn people away from the straight and narrow. His message to police and policy-makers is stark – it is worth spending time on small and seemingly trivial interventions, to prevent disorder from spreading and escalating. Reference: