The Snake And The Ring [Science Tattoo] 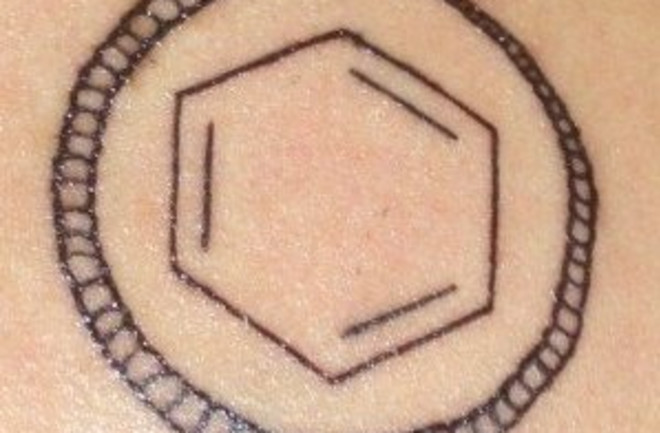 One thing about Richmond is that most everyone in the city has a tattoo. After living here for 3 years I finally gave into peer pressure and got a tattoo. The only thing I could think of getting that I wouldn't regret later in life was something nerdy/chemistry related, organic chemistry to be specific. While searching for inspiration I stumbled upon this story about the German chemist August Kekule who is responsible for discovering the ring structure of benzene.

Kekule claims that he stopped writing and dozed off to sleep. He saw atoms whirling and dancing before his eyes. The atoms then began to reassemble themselves into long rows that seemed to move about in a snake-like motion. As he watched the snake dance, the vision progressed until the snake formed itself into an image he had seen years before at a 1850 murder trial: the snake devouring its own tail.

So there it is...a benzene ring with an Ouroborus around it...