The Smell of the Cinema: Human Chemical Signals?

The air in a cinema contains a chemical cocktail emitted by the audience - and the emotional tone of the movie influences the molecular composition of the cloud. That's according to a striking set of results from researchers Johnathan Williams and colleagues who took air samples from two 230-seater screens of a cinema in Germany over a period of two weeks.

Here's an example of the chemical trace associated with shows of the movie "The Hunger Games 2: Catching Fire", featuring three chemicals - carbon dioxide (CO2), acetone and isoprene. It's obvious that levels of all three increase over the course of the movie, as they accumulate in the air from all the people in the audience: 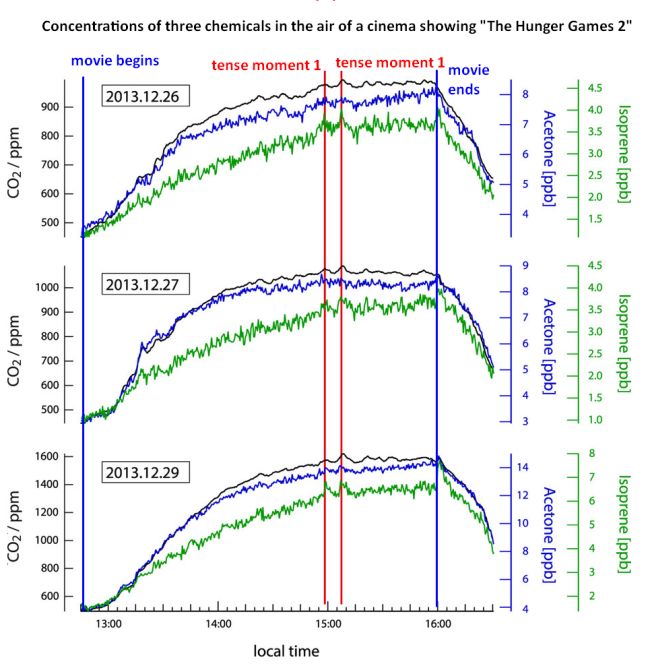 But more interestingly, we also see two peaks in the level of CO2 and isoprene towards the end of the movie. These peaks turn out to correspond to two especially tense moments in the film. This association makes sense because emotional stress increases heart and breathing rate, which will tend to increase the amount of CO2 exhaled. As for the isoprene, this is believed to be released by muscle activity - perhaps the isoprene peaks reflects people moving or 'fidgeting' in tension. Williams et al. report that there many more associations between all kinds of molecules and multiple different emotional states; they go on to speculate that these chemical secretions might be important (although it's unclear whether they are detectable by human noses)

Humans possess a very well developed sense of smell, and new evidence suggests that recall is more effective, and our perception of faces changes with odours present. Therefore the chemical accompaniment generated by the audience has the potential to alter the viewer’s perception of a film... These findings also have obvious industrial applications where an objective assessment of audiovisual material is sought from groups of people, for example, in advertising, video game design or in film making.

However, do the stats hold up? I'm not sure. Here's how Williams et al. describe their data analysis approach:

Data mining algorithms were applied to analyze the [chemical composition of the air] and label data within a 10 minute window around a given measurement datapoint (5 minutes backwards and 5 minutes forwards). The first method applied was forward prediction, whereby the [chemical concentrations] are predicted based on regression from past [concentrations] and the film labels. The second method was termed backward prediction, as it used [chemical] changes ahead of a given point in time to predict the current associated label.

However, one problem with this approach is multiple comparisons: Williams et al. examined lots of different chemicals (over 100), and dozens of scene content labels, so there must have been thousands of potential associations tested. The authors rather dubiously justify their decision not to apply any multiple comparisons correction as follows:

Whereas in most cases, an adjustment like Holm-Bonferoni should be performed on the tests, this is not necessary in this case, as we only searched for indications for further analysis, which we also can get from uncorrected values.