The Shocking Truth of the Notorious Milgram Obedience Experiments 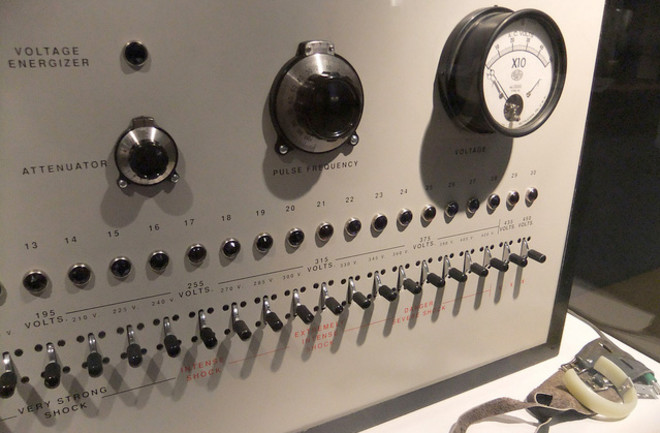 The original Milgram "shock box," on display at the Ontario Science Centre. Image by Isabelle Adam via Flickr

It’s one of the most well-known psychology experiments in history – the 1961 tests in which social psychologist Stanley Milgram invited volunteers to take part in a study about memory and learning. Its actual aim, though, was to investigate obedience to authority – and Milgram reported that fully 65 percent of volunteers had repeatedly administered increasing electric shocks to a man they believed to be in severe pain.

In the decades since, the results have been held up as proof of the depths of ordinary people’s depravity in service to an authority figure. At the time, this had deep and resonant connections to the Holocaust and Nazi Germany – so resonant, in fact, that they might have led Milgram to dramatically misrepresent his hallmark findings.

Stanley Milgram framed his research from the get-go as both inspired by and an explanation of Nazi behavior. He mentioned the gas chambers in the opening paragraph of his first published article; he strengthened the link and made it more explicit twelve years later in his book, Obedience to Authority.

At the time Milgram’s research was first published, the trial of high profile Nazi Adolph Eichmann was still fresh in the public mind. Eichmann had been captured in Buenos Aires and smuggled out of the country to stand trial in Israel. The trial was the first of its kind to be televised.

Suddenly the Holocaust was in American living rooms.  A procession of witnesses, most of them survivors, gave testimony while Eichmann, impassive and ordinary looking, looked on from inside a glass bullet proof box. Hannah Arendt, covering the trial, dwelled on his terrifying ordinariness, and famously coined the phrase the “banality of evil” to describe it.

Milgram stressed the connection between Nazi functionaries like Eichmann and the subjects in his lab. His findings appeared to demonstrate that ordinary people would inflict pain on someone else simply because someone in authority told them to.

In his 1974 book Milgram described how a person surrenders his will with that of an authority, entering an “agentic state.” For subordinates of Hitler in Germany and Stalin in Russia, this state was a “profound slumber” compared to the “light doze” of subjects in his lab, but the process was the same. Once a person merges with an authority who gives the orders, and enters the twilight zone of the agentic state, even though he might be doing inhumane things that are “alien to his nature” he feels “virtually guiltless.”

The trouble was that this zombie-like, slavish obedience that Milgram described wasn’t what he’d observed.

The statistical story of the obedience experiments is not nearly as straightforward as you’d think. The 65% headline figure, of people who followed the experimenters’ orders and went to the maximum voltage on the shock machine, implies that there was a single experiment. In fact there were 24 different variations, or mini dramas, each with a different script, actors and experimental set up.

It’s surprising how often Milgram’s 24 different variations are wrongly conflated into this single statistic. The 65% result was made famous because it was the first variation that Milgram reported in his first journal article, yet few noted that it was an experiment that involved just 40 subjects.

By examining records of the experiment held at Yale, I found that in over half of the 24 variations, 60% of people disobeyed the instructions of the authority and refused to continue.

Then there are the methodological problems with the experiment. The highly controlled laboratory study that Milgram described actually involved a large degree of improvisation and variation not just between conditions but from one subject to another. You’d expect this to happen in the pilot phase of a study when the protocol is still being refined, but not once a study has begun.

In listening to the original recordings of the experiments, it’s clear that Milgram’s experimenter John Williams deviated significantly from the script in his interactions with subjects. Williams – with Milgram’s approval – improvised in all manner of ways to exert pressure on subjects to keep administering shocks.

He left the lab to “check” on the learner, returning to reassure the teacher that the learner was OK. Instead of sticking to the standard four verbal commands described in accounts of the experimental protocol, Williams often abandoned the script and commanded some subjects 25 times and more to keep going. Teachers were blocked in their efforts to swap places with the learner or to check on him themselves.

The slavish obedience to authority we have come to associate with Milgram’s experiments comes to sound much more like bullying and coercion when you listen to these recordings.

Milgram went to great lengths with the stagecraft of his experiment, and was dismissive of subjects’ claims that they had seen through the hoax. Yet unpublished papers at Yale show that suspicion was alive and well among many of Milgram’s subjects (which is not surprising, given that Candid Camera was the most popular TV show in the United States at that time).

Subjects wrote to Milgram or called him afterwards to describe what had made them suspicious. Some commented on how the learner’s cries seemed to be coming from a speaker in the corner of the room, suggesting it was a tape recording. Others noticed the check given to the learner looked dog-eared and worn, an indication that it had been handed over many times before. The experimenter’s lack of concern for the learner and failure to respond to the learner’s complaints suggested there was nothing to worry about. Some subjects described how they had surreptitiously pressed switches of lower voltage but still the learner’s cries intensified.

But this skepticism of the subjects – whose belief in the experimental set up is pivotal to the validity of the experiment – has consistently been downplayed in discussions of the relevance and meaning of the results.

In the fifty years since publication of Milgram’s first journal article the obedience research continues to be cited as evidence of an enduring psychological truth: inside all of us is a Nazi concentration camp guard waiting to be called into service. Yet my archival research and examination of primary sources and that of other scholars contradicts this claim.

Milgram himself was privately aware of the methodological weakness of his research and struggled with many of the issues about the validity of experiments and their generalisability beyond the lab. Privately Milgram reflected that his work was more art than science, and described himself as a “hopeful poet.”

Poet or scientist, his determination to make a contribution to an understanding of one of the pressing issues of his generation led him to frame, shape and edit the story of his research for maximum impact. And while Milgram may have not measured obedience to authority in his lab his findings do offer us a powerful lesson: to question the authority of science and to be more critical of the stories we’ve been told.

Gina Perry is a psychologist and author of the book Behind the Shock Machine: The Untold Story of the Notorious Milgram Psychology Experiments, published in September 2013.