The Scientist Who Drew Brains, and Then a Nobel Prize

With an artist’s eye ?and a scientist’s mind, ?anatomist Santiago ?Ramón y Cajal was the ?first to see—and illustrate?—what neurons really do. ?His exquisitely detailed ?drawings changed our ?understanding of the brain ?and nervous system. 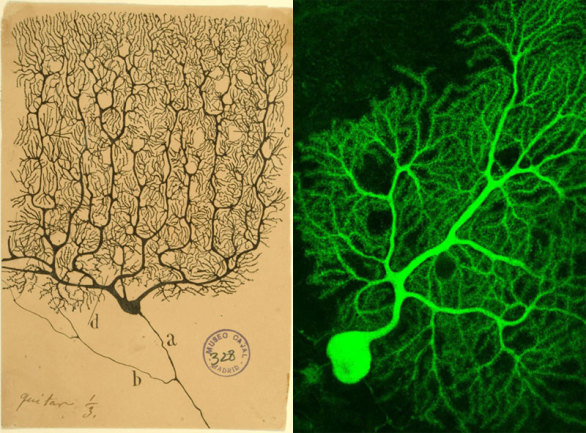 Cajal was born in 1852. As a young man he taught himself to paint and draw but turned to medicine for a career. In his thirties, he learned about a new way to stain tissue developed by the Italian Camillo Golgi: a new silver-based stain that turned some nerve cells completely black while leaving most others entirely untouched, rendering the delicate branches of the nerve processes clearly visible (as seen in the image on the left). "When I saw the very beautiful preparations of the cerebellum... in energetic and varied hues and stained completely... my delight was immense," Cajal wrote.

Cajal used this technique to see and draw nerve cells, some with long, sinuous axons; others fat, with bushy dendrites. His obsessive interest, artistic skill, and evolving understanding of the architecture of the nervous system found expression in beautiful portraits of brain cells and diagrams of nerve fibers. "Realizing that I had discovered a rich field, I proceeded to take advantage of it, dedicating myself to work, no longer merely with earnestness but with fury," he wrote in Recollections. "In proportion as new facts appeared in my preparations, ideas boiled up and jostled each other in my mind."

Although he had only his eyes and his pencils, his drawing in this slide echoes this modern photomicrograph of the same type of cell, which has been injected with a fluorescent dye and imaged with sophisticated optics. 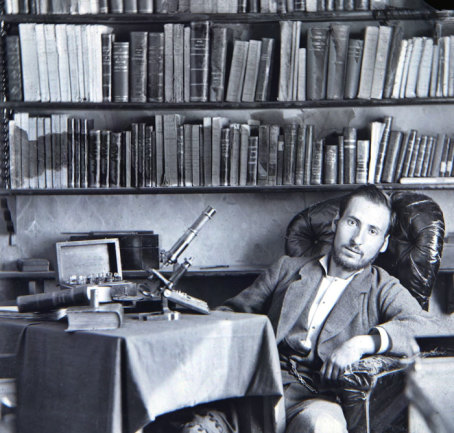 In Cajal's time, the dominant belief was that the brain and nervous system formed a "reticulum," a web of fibers that conducted nerve signals continuously, through a network of connections that linked it all together. It is certainly a simpler and more plausible idea than the truth that Cajal saw in his microscope: that the brain is stuffed with billions of tiny cells of many different sizes and shapes. Each nerve impulse--each twitch, each thought--travels through the brain by leaping from cell to cell. For that insight, he was awarded the Nobel Prize in 1906, shared with Golgi. Cajal also figured out that nerve cells are polar, meaning that signals enter the cell through the shrubbery of the dendrites at one end and leave through the other end at the whiplike axon.

More than a century later, we have machines that can visualize living structures smaller than the wavelength of light. Yet today's students of neuroscience recognize Cajal's artful and elaborately detailed illustrations of neurons. He is often called one of the fathers of neuroscience but is probably better described as one of its true artists. Thanks to his vision, we all see a new truth.

This is a portrait of Cajal at age 31. 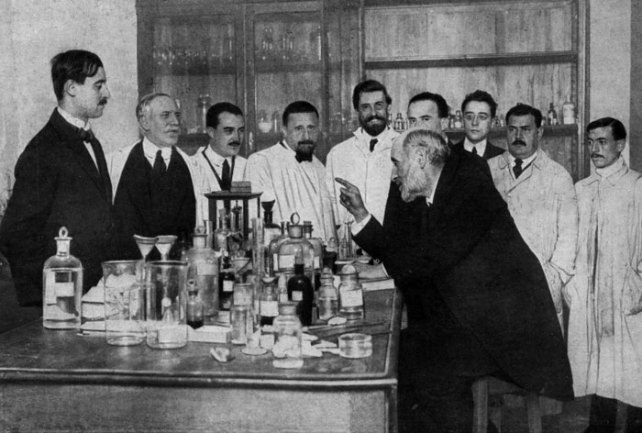 "Accept the view that nothing in nature is useless, even from the human point of view. Even ... where it may not be possible to use particular scientific breakthroughs for our comfort and benefit, there is one positive benefit--the noble satisfaction of our curiosity." From Advice for a Young Investigator

By the time of this 1915 photograph, taken at his Madrid laboratory, Cajal (pointing) was a great man of science. He was ambivalent about that role. "Like vehement and rude friendship, among us fame bruises while it caresses; it kisses but it crushes," he wrote. 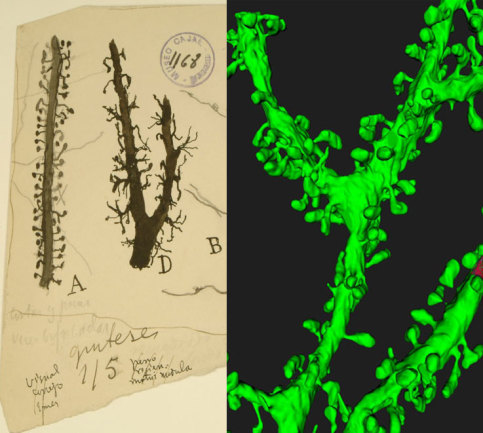 "There are no small problems. Problems that appear small are large problems that are not understood. Instead of tiny details unworthy of the intellectual, we have men whose tiny intellects cannot rise to penetrate the infinitesimal. Nature is a harmonious mechanism where all parts, including those appearing to play a secondary role, cooperate in the functional whole. In contemplating this mechanism, shallow men arbitrarily divide its parts into essential and secondary, whereas the insightful thinker is content with classifying them as understood and poorly understood, ignoring for the moment their size and immediately useful properties. No one can predict their importance in the future." From Advice for a Young Investigator

Cajal's precise understanding of anatomy is echoed in modern visualization techniques. His drawings of neurons captured the spidery outgrowths called dendritic spines, the site wehere each neuron talks to its neighbors. 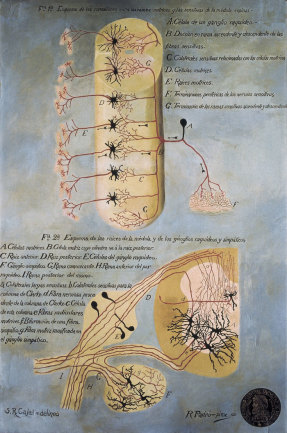 "I wish to warn young men against the invincible attraction of theories which simplify and unify seductively... We fall into the trap all the more readily when the simple schemes stimulate and appeal to tendencies deeply rooted in our minds, the congenital inclination to economy of mental effort and the almost irresistible propensity to regard as true what satisfies our aesthetic sensibility by appearing in agreeable and harmonious architectural forms. As always, reason is silent before beauty." From Recollections of My Life

This image shows details of the spinal cord. Cajal's patient investigation revealed the elaborate organization of the fibers that course between the spine and brain. The top image is a lateral view of the spinal cord; along the left, motor nerves connect to muscles, and along the right, a sensory nerve (red) snakes down to the skin.

The bottom image is a cross section showing motor cells (black) in the spinal cord. 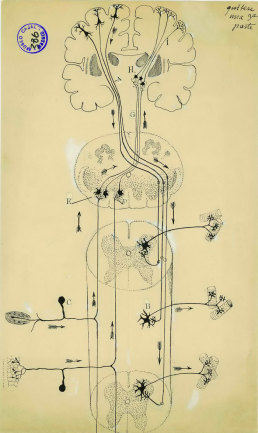 In this diagram of the spinal cord, Cajal depicts both individual cells and entire nerve tracts--a view no imaging technology can match. In his sketch, motor commands travel down the spine from the left side of the brain, while sensory feedback travels up the spine to the right side of the brain. 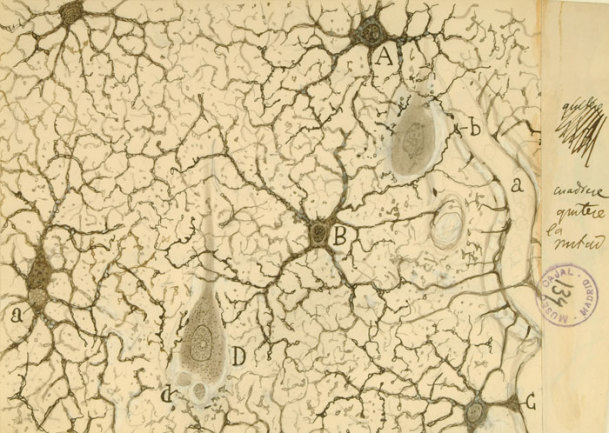 "Nature seems unaware of our intellectual need for convenience and unity and very often takes delight in complication and diversity." From Nobel lecture, 1906

Cajal's view of astrocytes (A, B, and C), cells that fill many important support roles for neurons (D) in the brain. 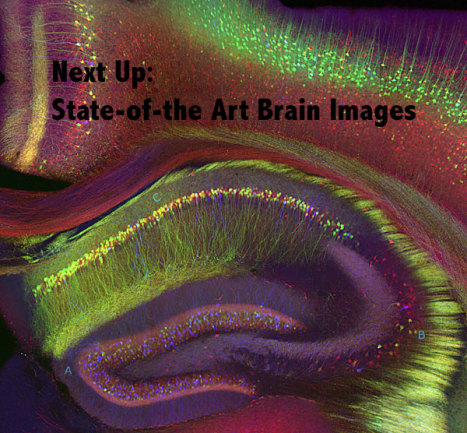 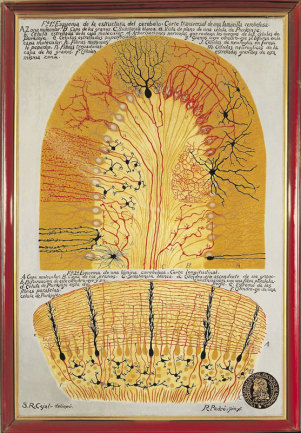 Anatomist Santiago Ramon y Cajal was the first to see--and illustrate--what neurons really do. His exquisitely detailed drawings changed our understanding of the brain and nervous system. Cajal relentlessly pursued his microcopic study of animal tissues, leading to an essential discovery: Brain signals jump from cell to cell rather than flow through a continuous web of fibers, as was believed at the time.

Cajal began to study histology because it was cheap. He was a man of poor health and modest means, and examining stained specimens required little more than a microscope and patience. The fact that he had no access to the fancy tools of leading bacteriologists--he held only an obscure academic post in the scientific backwater of Zaragoza, Spain--turned him toward the study of animal tissues and cells. These "captivating scenes in the life of the infinitely small," as he called them in his autobiography, Recollections of My Life, went on to inspire ideas that overturned how scientists understood the brain and the nerves.

Here are two of his cutaway views of the cerebellum, which coordinates movement. The top drawing has a rich diversity of cells, including treelike Purkinje cells, seen in red and tan, and stellate cells, shown in black. The bottom drawing is a longitudinal cross section of the cerebellum.