In many of the sci-fi futures that we know and love, racism, sexism, and homophobia are often scrubbed out of existence. Caprica/BSG, Star Trek, Torchwood, Mass Effect, even less thoughtful fare like Starship Troopers, depict residents of the future who are less interested in the permutations of human identity and more interested in the qualities of a person's mind and spirit. Even Futurama's "Proposition Infinity," concerning the fake-contentious "robosexual marriage" controversy, spoofs this tendency. 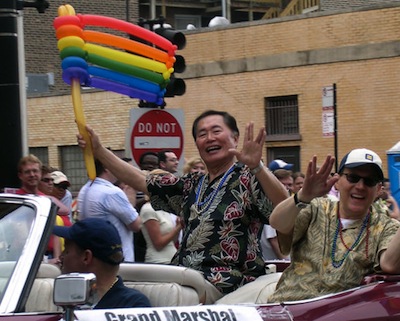 Yesterday, US District Court Judge Vaughn Walker helped us move the rights needle a little further toward that future. In a heavily disputed decision, Walker overturned the barbarous Proposition 8 on the grounds it was unconstitutional under California law. His ruling was unequivocal and exhaustive: same-sex marriage is and should be equal to opposite-sex marriage. No doubt the case will move to the Supreme Court, where Obama and Congress' collective feet-dragging on DOMA and DADT will finally be confronted. Until then, same-sex marriage is forbidden in most states in the USA and, regardless of the Supreme Court decision, will remain so in most countries in the world. What is astounding is that for all the value we place in "human rights," we are very good at not giving rights to humans. As I mentioned in my "Yes, We Should Clone Neanderthals" post, we regularly restrict human rights in those who are mentally un- or under-developed. Many who argued for the rights of Neanderthals based their arguments on the fact that the Neanderthal is "mostly human" or has very similar DNA and biology to a human being. While I agree the Neanderthal clone should have the same rights as a human being, I agree for a reason entirely other than biology. Rights have nothing to do with being human. Our species' history is and remains one largely built around the ever extending circle of those who have "rights" and what "rights" they have. Pick any great expansion in the rights of humanity, from the advent of democracy to the Nineteenth Amendment to yesterday's decision, and I doubt you will find DNA at the philosophical core of the change. So what is it? When we, the human civilization, recognize the rights of those who have been oppressed or ignored, what is it we are recognizing? Their humanity! you may answer. But what does that mean? Surely a baby and a corpse are as human as an adult Homo sapiens is, but only the adult can vote. Why? In a word: personhood. This realization gets to a central tenet of the philosophy of transhumanism: that rights are not derived from being human but from being a person. Consider the shows listed above, particularly Mass Effect and Star Trek, and ask if Worf or Liara or Data have "human rights." Of course they don't. But they do have rights. The rights are derived from their being sentient, sapient beings capable of autonomous, reflexive, symbolic, ethical, and willful thought. That is, they are persons -- and persons have rights. The brilliance of personhood as a foundation for rights is that it exists independent of biology, even of physical substrate. You already know about personhood because you've seen it in your favorite movies. The Iron Giant, District 9, Blade Runner, A.L.F., E.T., Monsters Inc. and Ratatouille are about personhood. The eponymous hero of The Iron Giant demonstrates his personhood by willfully not being a gun and saving the day; Remy does so less on a smaller scale but no less movingly in Ratatouille by cooking a gourmet meal that triggers a Proustian flashback in Paris' toughest food critic. Personhood is what you discover when you stop trying to figure out what makes humans human and instead try to understand how we recognize another sentient mind. A mind imbued with rights. Personhood is, as simply as I can put it, the degree to which an entity exhibits a combination of aspects of the mind and consciousness, such as sentience, creativity, intelligence, sapience, self-awareness, and intentionality. One great way to look at the question comes from Steven Wise's

Drawing the Line: Science and the Case for Animal Rights,

in which he argues that would-be persons can be ranked from “stimulus-response machines” at 0.0 up through fully functioning, rational adult humans at 1.0. The critical note here is that humans themselves can be placed on the scale, with a blastocyst ranking at 0.0 and 5-year-old somewhere in the range of 0.8. An example of a creature that may benefit from this personhood scale would be the former student of Irene Pepperberg, Alex, an especially bright grey parrot, who would fall above the 0.7 intelligence threshold for "limited personhood." If an artificial intelligence system or "uplifted" animal (e.g., Dug from Up!) were capable of achieving the same level of reason and mature reflection as an adult human, then it would be granted the same rights as an adult human. If you were to chart degrees of personhood against degrees of rights, it might look like this example taken from James Hughes' Citizen Cyborg:

The reason all of this matters is that human beings have never been granted rights because they are merely human. Rights come from a demonstration not of DNA or taxonomy, but of mental and moral ability. The reason Judge Walker's decision is not only correct now, but will be vindicated by history, is that it recognizes the right of two consenting persons to marry. If we did bring a Neanderthal back, his or her rights would be founded not in the similarity to human DNA but in the rational and moral mind, the personhood, that the clone would have. The battle for the right of same-sex couples to be married is, in the extremely long view, a fight for recognition as persons. Whether aliens, robots, uplifted animals, or cloned Neanderthals will be the first non-humans to demand rights, I don't know; however, I do know that it is not a matter of if, but when. I just hope by then we have moved beyond mere human rights. - Image via Wikipedia 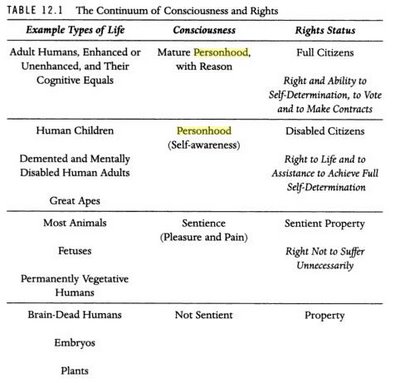