The Questionable Compatibility of Introverts and Extroverts

Your success will depend on the type of relationship you want to create, say experts. 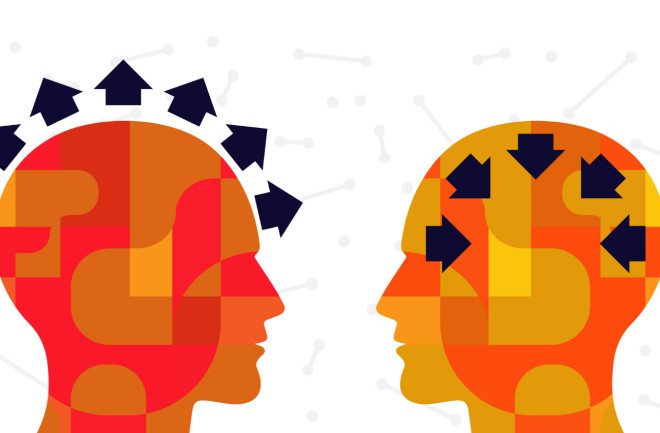 Swiss psychiatrist Carl Jung popularized the terms introvert and extrovert in the 1900s; but a century later, his postulations about personality types have become so warped by popular culture that the reputations of introverts everywhere are at stake.

Jung originally sought to understand how people derive and orient their energies. That is to say, according to Jung, extroverts draw their energy from those around them while introverts pull it from within themselves. He suggested that these personality traits are different — but equally healthy. One isn’t better than the other.

Studies suggest that, in the general population, there’s a nearly 50-50 split between introverts and extroverts — though we live in a world of “extroversion bias,” write the authors of a recent study published in Psychological Science. Popular opinion in the U.S. has shifted Jung’s original definitions, ascribing more positive adjectives, like “outgoing,” “high energy” and “chatty,” to extroverts while introverts are dismissed as “withdrawn,” “shy” and “quiet.”

These biases aside, can introverts and extroverts get along? The short answer: It depends. If we return to Jung’s original theory and understand that these two personality types are about how people recharge their “social batteries” differently, we can better understand how they might get together, play together and work together successfully.

It’s all about the wiring inside our brains, say the experts. Todd Kashdan, a psychology professor at George Mason University and co-author of The Upside of Your Dark Side, argues that the reward centers in our brains are activated by different environments; an extrovert draws energy from the stimulation of a group, while an introvert needs a quiet environment to recharge. The good news, according to researchers and those living with an opposite personality type, is that we can learn from each other.

“Love doesn’t mean finding someone who’s the same as you; it means finding somebody who makes you better,” writes Lev Novak, a self-proclaimed extrovert, in a Washington Post article from 2016 about his relationship with his introverted girlfriend. “More than an obstacle, our different perspectives have brought us a closer, richer life … I became someone more well-rounded, and our differences became opportunities for growth.”

Arthur Brooks, a professor of management practice at the Harvard Business School, agrees that introverts and extroverts can, indeed, change. Introverts can learn to make conversation, step outside their comfort zones and ask for help; extroverts can learn to listen, have deeper conversations, and be alone with their thoughts and reflect quietly. In fact, a 2019 study suggested that introverts could be happier if they simply fake extroversion, by doing things like smiling at a stranger or reconnecting with an old friend.

But in the end — at least, according to another recent study published in Evolution and Human Behavior — we are who we are. While those of us who are “bold and outgoing” or "shy and retiring” can shift and learn to be another way if needed, fundamentally, we all remain who we are and that doesn’t change much throughout our lives.

Popular opinion and pop culture suggest that we must be extroverted to achieve success in our careers. In a 2006 survey, 65 percent of senior corporate executives identified introversion as a “barrier to leadership.” That means for an introvert to rise to the top, they need to beat the bias.

But some research suggests introverts’ quiet nature gives them a hidden advantage in business — and their strength and endurance can help them rise to the top. A 10-year study of 17,000 business executives, part of ghSmart’s CEO Genome Project, suggested that the introvert, not the extrovert, makes for a good (if not better) boss, particularly when their employees offer ideas for improvement. “Such behavior can make extroverted leaders feel threatened. In contrast, introverted leaders tend to listen more carefully and show greater receptivity to suggestions, making them more effective leaders,” they write. And other studies suggest that introverted traits correlate positively with creativity.

But what about compatibility between these two different personality types in the workplace? Don’t hold your breath; the different communication styles utilized by the two types can lead to a surplus of misunderstandings. A 2014 study shows that introverts give poor performance reviews to their extroverted peers, consistently evaluating them as poor performers while at the same time being less likely to endorse them for promotions.

When looking at each of these personality types, however, what seems to be most important is that we all stay true to who we are. A study published in the Journal of Research in Personality suggests that, globally, those who choose their own behavior rather than allow themselves to be constrained by outside pressures feel the most emotional stability. It comes down to the power of the truth.