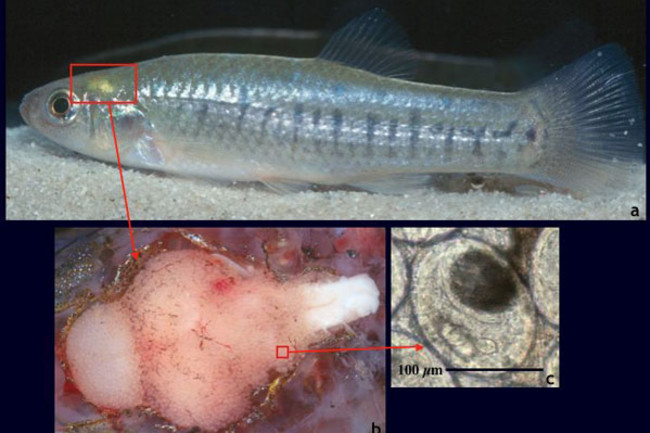 You go for a swim, and you don't even notice the tiny worm that burrows into your skin. It slips into a vein and surges along through the blood for a while. Eventually it leaves your blood vessels and starts creeping up your spinal cord. Creep creep creep, it goes, until it reaches your head. It curls up on the surface of your brain, forming a hard cyst. But it is not alone--every time you've gone for swim, worms have slithered into you, and now there are thousands of cysts peppering your brain.

And they are all making drugs that are seeping into your neurons. These drugs are a bit like Prozac, except far more sophisticated. They target certain neurons in certain parts of the brain, altering your behavior surgically, without unwanted side effects.

You don't know what's happening to you. But in situations in which you'd expect to feel scared or stressed, you just want to race around. You whirl in circles, doing whatever is necessary to get the attention of the very thing that terrifies you. Thanks to your uncontrollable flailing, that terror  finds you, and you are destroyed.

This is how I imagine you'd feel if you were a fish infected by a parasitic worm called Euhaplorchis californiensis.

I first encountered these remarkable parasites about ten years ago, when I took a trip out to Santa Barbara. In the estuaries and salt marshes along the California coast, one of the most common fish is the California killifish, and many of them carry the parasites. The parasites get their start in horn snails, where they produce offspring that can swim around the water searching for killifish. In their next phase, they live as cysts on the brains of the killifish, but in order to reach the stage when they can reproduce, they must get inside the guts of shore birds.

Kevin Lafferty, who studies these parasites, showed me a tank full of infected killifish. Despite having thousands of cysts on their brains, they could swim as vigorously as uninfected killfish. They can also get as much food as healthy fish and reproduce normally. But the fish in the tank acted oddly. They swam up near the surface of the water, making tight turns that showed off their glinting sides. It's tempting to say that the fish are trying to make themselves as conspicuous as possible, but for a fish, it doesn't really matter how conspicuous it is to a human. So Lafferty had run an experiment to see whether the birds thought the infected fish were acting oddly. There is indeed a difference--the infected fish are 10 to 30 times more likely to get grabbed by a bird than a parasite-free one.

Many parasites have evolved such wickedly elegant strategies for manipulating the behavior of their hosts for their own benefit (which I describe at more length in my book Parasite Rex). But exactly how they do this parasitological voodoo is quite mysterious. A number of studies suggest that parasites release chemicals that can precisely alter the way in which the nervous systems of their hosts work. But it's easy for parasites to hide a potent drug in the normal flow of neurochemistry in the brain. It's also possible, at least in some cases, that parasites don't do much of anything to manipulate their hosts. Just being infected can affect how animals behave--in some cases making them sluggish, in some cases stressing them out.

Jenny Shaw, a post-doctoral researcher at the University of California at Santa Barbara, has been working with Lafferty and other colleagues to figure out how Euhaplorchis manipulates the killifsh. They're reporting some early results in a new paper in the Proceedings of the Royal Society. While they haven't found the Parasite Panic Pill just yet, they do have some intriguing results. They took tiny pieces from different regions of the brains of infected and clean killifish. In each chunk of brain, they measured levels of neurotransmitters such as dopamine and serotonin. To compare the effects of parasites to ordinary stress, they also looked at the brains of stressed killifish (you stress a killifish by lowering the water in its tank).

Shaw and her colleagues point out that in normal fish, a surge of serotonin can cause fish to freeze, which is a good way to hide from motion-sensing predators. By lowering the serotonin from the raphe nuclei, parasites may prevent fish from hiding from wading birds. Dopamine, on the other hand, stimulates fish to swim more and behave aggressively. It's possible that a parasite-boosted level of dopamine also helps turn fish into bird breakfast.

It may be years before someone finds the molecules these parasites release to cause these changes in serotonin and dopamine. But in the meantime, it's pretty mind-blowing to think that there are literally millions of fish in the waters off of California being drugged by their parasite overlord. Scientists may have to wait a while before they can speak definitively about the medicine chests of the puppet masters, but science fiction novelists (I'm talking to you, Scott Sigler) are welcome to start their engines.