The Physiology of . . . Facial Expressions

A self-conscious look of fear, anger, or happiness can reveal more than a lie detector 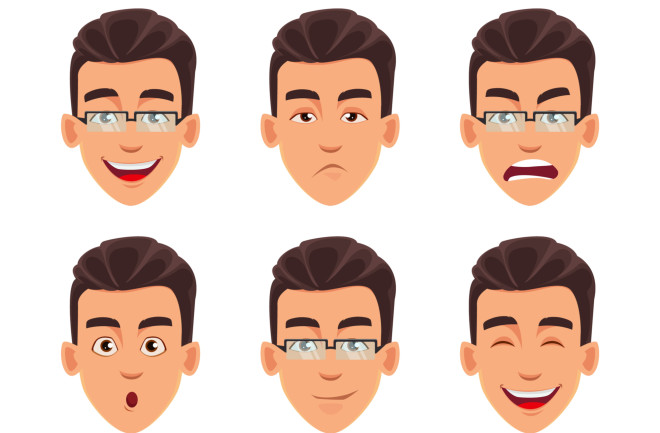 Chances are, you’re not very good at faking a smile. You can raise the corners of your lips into a neat grin—as one does for the camera—and you can probably tighten your eyelids a bit to enhance the effect. But unless you’re amused, excited, grateful, relieved, or just plain happy, you probably can’t pull your cheeks up and your eyebrows down to form a smile that looks genuine. No more than one in 10 people can voluntarily control the outer orbicularis oculi, the muscles surrounding the eye sockets, with that much precision.

Paul Ekman has spent 40 years watching thousands of people try. An emeritus professor of psychology at the University of California at San Francisco, Ekman is a world authority on facial expressions. He is also extraordinarily skilled at faking them. In the course of cataloging more than 10,000 human expressions, he has taught himself to flex each of his 43 facial muscles individually. He can even wiggle his ears one at a time. “If only they had an Olympic event for facial athletes,” he says.

Ekman may never win a gold medal, but he has no shortage of admirers. In recent years, as the war on terrorism has escalated, he and his colleagues have taught hundreds of police officers, judges, airport security officers, and FBI and CIA agents to size up their suspects and to read clues in their facial expressions. He is now an adviser for the Department of Defense, which is developing computer technology that can scan and analyze facial movements on videotape.

Charles Darwin was convinced that facial expressions don’t vary from culture to culture, but by the 1950s most social scientists had come to believe the opposite. To see who was right, Ekman traveled to the highlands of Papua New Guinea in 1967 and visited the Fore people, who had never been exposed to movies, television, magazines, or many outsiders. When Ekman showed the Fore photographs of faces with various expressions, they interpreted them exactly as Westerners would. A sad face, for instance, made them wonder if the person’s child had died.

Similar studies by other scientists have since shown that facial expressions across the globe fall roughly into seven categories.

SADNESS: The eyelids droop as the inner corners of the brows rise and, in extreme sadness, draw together. The corners of the lips pull down, and the lower lip may push up in a pout.

SURPRISE: The upper eyelids and brows rise, and the jaw drops open.

ANGER: Both the lower and upper eyelids tighten as the brows lower and draw together. Intense anger raises the upper eyelids as well. The jaw thrusts forward, the lips press together, and the lower lip may push up a little.

CONTEMPT: This is the only expression that appears on just one side of the face: One half of the upper lip tightens upward.

DISGUST: The nose wrinkles and the upper lip rises while the lower lip protrudes.

FEAR: The eyes widen and the upper lids rise, as in surprise, but the brows draw together. The lips stretch horizontally.

Whether faces can express any more than these seven emotions is a matter of some debate. There could be specific expressions for contentment, excitement, pride, relief, guilt, and shame, Ekman says, but they have yet to be delineated. Individual elements of each expression can occur in varying intensities or may be missing altogether. A look of mild surprise can be shown by the eyes alone, for instance, if the mouth doesn’t move. Emotion usually leads to an expression, but studies have shown that the process can also work in reverse: If you force your face to look sad or angry, the rest of your body will react as well, and you may involuntarily begin to feel those emotions. A look of anger will make your heart speed up and your blood vessels dilate until your skin turns red; a look of fear can make your hands cold and clammy and your hairs stand on end; a look of disgust can make you nauseated.

These internal responses may last a full minute or more—far longer than the expressions themselves, which last no more than two or three seconds. When people try to hide their emotions, their expressions may flash for one-fifteenth to one-twentieth of a second—just long enough for others to see them. After that, people can wipe away their “microexpressions,” as Ekman describes them. It is much harder to remove all traces of feeling from the voice. That’s why Ekman tells police to keep their suspects talking.

Ekman’s weeklong classes teach law enforcement officers not only to analyze expressions but also to interpret voices and gestures, ask questions, and build a rapport with suspects. He shows his students how to recognize the basic emotions and spot asymmetries—a crooked smile, for instance, or a half-closed eye—that are often a sign of conscious lying. The techniques work best when a suspect is telling a lie for the first time. “The more often you tell a lie, the more likely you will come to believe it is the truth,” Ekman says. That’s why it’s important that police and security officers learn to spot a liar on first contact. “By the time something gets to court, the lie has been rehearsed.”

No matter how skilled a person becomes at reading the clues, it’s always easier to recognize when someone is lying than when he is telling the truth. And some lies are easier to catch than others. A polite lie—when a person tells his host that dinner was delicious or remarks on how much he likes a friend’s new suit—is harder to spot than one that is laced with emotion. When people lie about whether they believe in the death penalty, for instance, they are not so good at hiding their true feelings. High-stakes lies, including whether one is engaged in illegal activity, for instance, are likewise difficult to cover up.

The computer system that Ekman is helping the Department of Defense develop will be able to read all 10,000 facial movements involved in emotion. The system is a few years from completion, but even if it’s successful, Ekman would put his money on a human being if he had to choose between the two. “Human beings have a complex computer sitting up there in their brains,” he says. “With enough training, humans can do very complex evaluations very quickly.” They also don’t have to wait for a suspect to be videotaped and thus get more time to practice lying.

When Ekman trains police and security officers, whether in person or with a version of his program on CD, it takes them only about an hour to learn to recognize microexpressions. But some are far more skilled than others. As a group, U.S. Secret Service agents tend to be better than average—a third of those Ekman tested could distinguish a lying face from a truthful one about 80 percent of the time. Psychologists, police officers, CIA and FBI agents, lawyers, and college students tend to do little better than chance.

Ekman’s colleague Maureen O’Sullivan has found that a select few can become nearly 100 percent accurate at catching liars: Of the more than 13,000 people she has tested in the past 10 years, 31 were “wizards,” as she calls them. Wizards see the whole picture, not expression alone. “Some people, when they’re lying, don’t show anything on their faces,” O’Sullivan explains. Wizards tend to be unusually intelligent, but they also have plenty of practice and are eager to hone their skill. “You have to have the basic talent but also the motivation to work at the skill,” she says. Although the majority of police officers are not that good at catching liars, her small group of wizards includes unusually savvy cops, as well as lawyers, dispute mediators, and therapists who have taken their natural people instincts far beyond the norm.

Ekman’s next challenge is to identify more specific expressions of anger. Are there subtle facial movements that separate, say, aggression and petulance or rage and plain annoyance? Law enforcement agencies are eager for the answer—particularly if Ekman can identify any expressions or body language that signal a forthcoming attack. Even if they exist, Ekman probably won’t publicize his findings—otherwise, criminals will just learn to better mask their intentions. “We will make this available for law enforcement and security agents alone,” he says.