The perils of "reason" 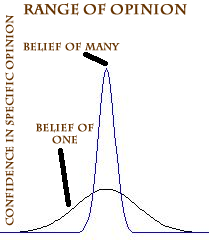 In my post below in regards to Sam Harris' recent interactions on the web I reasserted by suspicion of reason. This naturally elicited curiosity, or hostility, from some. I've talked about this before, but the illustration to the left gets at my primary issue. When individuals are reasoning alone they often have a high degree of uncertainty as to their conclusions. But when individuals are reasoning together they seem to converge very rapidly and with great confidence upon a particular position. What's going on here? In the second case it isn't reason at all, but our natural human predisposition toward group conformity. There's a huge psychological literature on this, so I won't belabor the point. When people brandish "reason" and "rationality" explicitly I'm somewhat skeptical. If rational conclusions are so plain and self-evident why are we even asserting the primacy of reason? If something really is so clearly reasonable you usually don't go around trumpeting how reasonable it is. Another pitfall of reason is that it lulls use into the delusion that we have a transparent understanding of our own motivations and logic, as well as the motivation and logic of others. In my post below I explicitly stated that I disagreed with Harris on the substance of much of what he asserted and assumes in the first paragraph, but multiple people simply imputed to me his views as if they were mine! Even though I declaimed this position very early on, they simply could not generate an coherent framework where I did not agree with either them or Harris. There were only two options conceivable for them which the "reason" engine could operate upon. As I clearly did not agree with them (or so they thought), they simply injected in the axioms which would be appropriate for Sam Harris into my own box, and then began firing the appropriate propositions. Here we have the problem that reasonable arguments and the self-evident truth of rationality is often only clear among people who already agree on everything of substance. People who agree can confidently assert the rationality and reasonableness of their arguments to those who have the exactly same perspective. So, for example, you have educated people like William F. Buckley, Jr. explaining that there is more evidence of the resurrection of Jesus Christ than that Abraham Lincoln gave the Gettysburg Address (corrected). This was eminently reasonable to the circles which Buckley moved in. After all, Christ did rise from the dead, everyone knows that! Well, not really. Buckley's son, Christopher, who is not a believer, has explained that his father had a genuinely difficult time imagining the perspective of those who did not share his beliefs on this matter. This is not to say that reason and rationality are not without utility. These are humanity's great cognitive jewels. But great tools can be used to various ends, and true reason and rationality are very difficult. Mathematics for example is undoubtedly true rationality, with crisp and precise inferences being derivable. But most other intellectual structures are not so clearly self-evident as mathematics. Verbal logic and reasoning are riddled with the pitfalls of cognitive bias. Because most people share the same systematic biases it is very difficult for groups of individuals engaging in self-reinforcing masturbatory 'rationality' discourses to perhaps step back and wonder about their motivated reasoning. Unfortunately it may be that reason emerged as a human faculty to win arguments, not resolve truth. If this is true we are much more lawyers than mathematicians in our discourse. Does this seem plausible to you? Unfortunately it does seem plausible to me. Where does this leave us? I think we need to be skeptical of reasoned arguments. This doesn't lead me down the path of intellectual nihilism. Reason is which leads us to truth is possible. But it may be that this is a very specialized usage of reason, which requires special conditions. 'tis far easier to seem clever than be correct.