When the going gets tough, thousands of people try to boost their failing self-esteem by repeating positive statements to themselves. Encouraged by magazine columnists, self-help books and talk-show hosts, people prepare for challenges by chanting positive mantras like "I am a strong, powerful person," and, "Nothing can stop me from achieving my dreams." This approach has been championed at least as far back as Norman Vincent Peale's infamous book The Power of Positive Thinking, published in 1952.

But a new study suggests that despite its popularity, this particular brand of self-help may backfire badly. Ironically, it seems to be people with low self-esteem, who are most likely to rely on such statements, who are most likely to feel worse because of them. Joanne Wood from the University of Waterloo found that people with low self-esteem who repeated "I'm a lovable person" to themselves felt worse than people who did neither.

The effect may be counter-intuitive, but the theory behind it is very straightforward. Everyone has a range of ideas they are prepared to accept. Messages that lie within this boundary are more persuasive than those that fall outside it - those meet the greatest resistance and can even lead to people holding onto their original position more strongly.

If a person with low self-esteem says something that's positive about themselves but is well beyond what they'll actually believe, their immediate reaction is to dismiss the claim and draw even further into their own self-loathing convictions. The positive statements could even act as reminders of failure, highlighting whatever gulf someone sees between reality and the standard they set for themselves. In short, someone could repeat "I'm a lovable person" but they'd really be thinking "I'm actually not" or "I'm not as lovable as I should be." Statements that contradict a person's self-image, no matter how rallying in intention, are likely to boomerang. 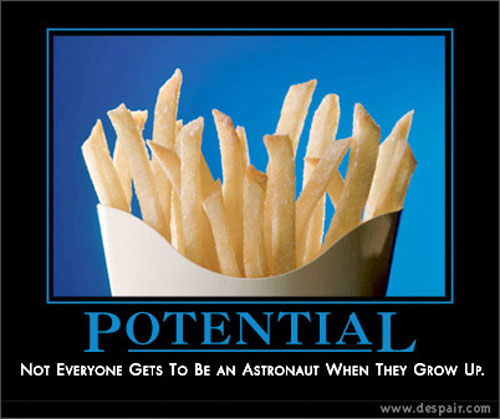 Wood first asked 249 students to fill in a short questionnaire designed to analyse their self-esteem and to say how often they said positive things about themselves, on a scale from 1(never) to 8 (almost daily). Half gave a rating of 6 or higher, with no gender differences. Recruits who already had high self-esteem spoke well of themselves most often, particularly to cope with exams, prepare for presentations, cope with problems, or even as part of their everyday routine. On average, they felt that such statements were helpful. Even those with low self-esteem agreed, although they were also more likely to claim that these optimistic missives sometimes made them feel worse.

To find out why, Wood asked 68 students to write down anything they felt or thought in a four-minute period. The recruits included equal numbers of students with high or low self-esteem and half of each group were told to say to themselves, "I am a lovable person", every 15 seconds, to the sound of a doorbell.

Afterwards, they completed a battery of questionnaires. Two of these were designed to assess their mood, including questions such as "What is the probability that a 30-year-old will be involved in a happy, loving romance?" and "Would you like to go to a party?" Another set of questions rated their current self-esteem by asking them to say which of two adjectives they felt closest to - valuable or useless, nice or awful, good or bad, and so on.

As you might expect, the students with higher self-esteem had higher, happier scores on the three questionnaires than those with low self-esteem. The positive statements, far from bringing the low group to the high one's level actually widened the psychological gulf between them. People with high self-esteem feel better after affirming their lovability, while those with low self-esteem feel worse.When Wood looked at what they had jotted, she saw that those with high self-worth were much more likely to confirm their lovability than to contradict it. But those who lacked self-esteem were just as likely to write that they were unlovable or lovable, even if the words they were speaking suggested a positive slant.

But dredging up these negative thoughts isn't the only peril of positive thinking. Another group of 116 students were asked consider the statement "I am a lovable person" and either to focus only on ways in which it's true, or to consider ways in which it is and isn't true. After the task, people with high self-esteem benefited from focusing only on the positive side of the statement, but those with low self-esteem felt worse about themselves if they dwelled only on positives than if they were asked to take a more balanced approach.

Again, Wood has a simple explanation for these seemingly counter-intuitive findings. She suggests that if people with low self-esteem are asked to think only positive thoughts, and find it difficult to block out negative ones, that merely certifies their belief that they aren't measuring up to standards. This deduction could be even worse than the negative thoughts themselves. And it would be most likely to afflict people who already have low self-esteem, and already have plenty of distracting negative thoughts knocking about!

This is why people actually fared better if they were allowed to consider the ways in the optimistic assertion they were making wasn't true. With that allowance, any negative thoughts they had would have been expected and wouldn't have violated any external benchmark.

Other psychologists have found similar results. In 1991, Norbert Schwarz found that people who were asked to remember 12 examples of being assertive rated themselves as being less assertive than those who just had to remember 6 examples. It seems that because people had trouble in bringing a dozen examples to mind, they reasoned that they must not be very assertive after all!

This study has big ramifications for followers of self-help programmes, a pervasive part of Western culture. Repeating positive things about yourself only seems to work for people who already feel good about themselves, and only to a small and trivial extent. For people who need it the most, positive thinking certainly has a lot of power, but it can be of a detrimental kind.

Is positive thinking worthless then? Wood doesn't think so, but it's certainly no psychological panacea. She suggests that it could work in situations where people make very specific statement that are impossible to argue with or consider in too much detail, or when nothing major is at stake. For example, people may be better off saying "I choose good gifts for people" rather than "I'm a generous person". But as she says, "outlandish, unreasonably positive self-statements, such as 'I accept myself completely,' are often encouraged by self-help books. Our results suggest that such self-statements may harm the very people they are designed for: people low in self-esteem."

More on self-esteem and happiness: