The New Maps of Your Mind

Maps that encompass the complete brain bring new depth and detail to neuroscience—and create gorgeous views of the landscape inside your head. 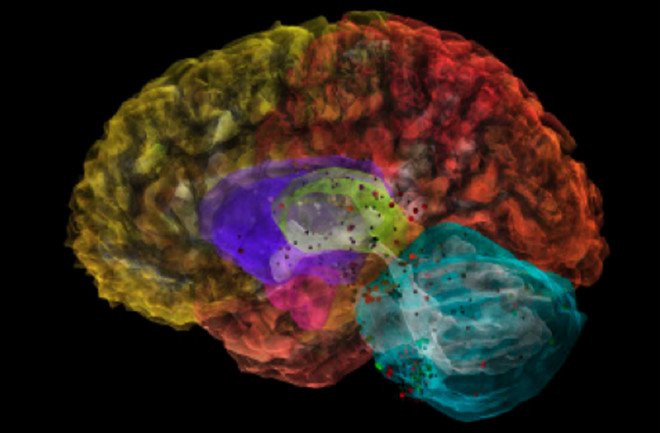 You have about 100 billion nerve cells, give or take, packed inside your brain. Each one is wired up to about 10,000 other cells. Together, they form around one quadrillion connections. Through this electrobiological grid zip about 8.6 quadrillion messages each day.

If those numbers make your head spin, try this comparison: Each day the entire global population places roughly 50 billion cell phone calls and sends 17 billion text messages and 300 billion emails. In other words, the daily digital communications by every person on the planet add up to less than 1/200 of 1 percent of the number of signals that your brain cells send to each other every day. The mind truly boggles itself.

For this reason, neuroscientists generally study the brain’s bustling hive of cells and fibers by simplifying, examining a handful of proteins or cells at a time. But isolating small bits of the brain has limitations, since the essential function of the organ is to integrate information. This phenomenally complex three-pound lump of flesh is much more than the sum of its parts.

So researchers are now trying to wrap their heads around the whole brain at once. Under the banner of “connectomics,” researchers at Harvard University, the Max Planck Institutes, and other institutions are mapping the wiring of large chunks of the mouse brain. At the Allen Institute for Brain Science and the University of California, San Diego, neuroscientists have joined with visualization and bioinformatics experts to create comprehensive atlases of the human and rodent brains. Similar to the way Google Earth brings together different views of the planet that allow you to lay traffic patterns atop road maps, for instance, these interactive 3-D atlases integrate images of brain structures with information about how the cells within those structures behave. Download the software, and you can cruise through the brain’s biggest features, then zoom in to inspect the gene activity of microscopic subgroups of cells within them.

By expanding our view, these efforts will attempt to enlarge our understanding as well. “The cerebral cortex is a massively interconnected circuit, and looking at it piecemeal probably won’t give us the gestalt—the logic of the thing,” says R. Clay Reid, a neurobiologist at Harvard Medical School who is involved in one of the connectomics projects. The cerebral cortex, where much of our thinking takes place, is composed of some 15 million similar blocks of cells. Somehow that repetitive architecture permits an enormous diversity of cognition; our brains use the same basic machinery to interpret a visual scene, write a sonnet, or make plans for lunch. Such diversity is made possible by the variation in connections, Reid says. Tracing the neural wiring could reveal how the brain manages to be such an amazingly flexible information-processing device.

In keeping with the brain’s complexity, the work that goes into these maps is staggering. The Allen human brain atlas, for example, includes 100 million data points on 1,000 anatomical regions. What makes that level of detail possible is the availability of cheap, powerful computers; the spread of new imaging technologies; purpose-built robots that automate labor-intensive lab procedures; and new biological tricks such as inserting glow-in-the-dark genes to make specific brain cells light up.

Like seeing Earth from space for the first time, these whole-brain projects will irrevocably widen our perspective on the world.

A Technicolor brainscape illustrates the sites of action of dopamine, a brain chemical that modulates feelings of novelty and pleasure, among other things. Visualization experts at the Allen Institute for Brain Science created the images to demonstrate how such views can clarify brain function and malfunction. Abnormal dopamine processing in the brain is associated with problems including schizophrenia, attention deficit disorders, and Parkinson’s disease.

In the wide-angle view here, major brain structures are visible in color-coded transparency. Each speckle marks a spot where a dopamine transporter gene, DAT, is highly active, producing lots of the protein that sucks dopamine into a nerve cell.

The dimensions of data in the Allen Human Brain Atlas allow scientists to explore freely inside the brain. A scientist interested in schizophrenia, for example, might see how much DAT is expressed in anatomical areas that seem to function abnormally in patient brain scans, as a way of relating the genetics of the disease to the symptoms and the anatomy. “We’re trying to help researchers generate hypotheses that will lead them to the next big thing,” says human brain atlas program manager Elaine Shen of the Allen Institute. The atlas, available free online, is the first comprehensive effort to map every gene expressed in the brain. To build it, researchers sliced two donated brains exceedingly thin, then scanned them and analyzed their biochemistry; robots assisted with the work. Allen Institute workers are now adding more brains to the atlas. The final price tag when the project is finished next year is estimated to reach $55 million.

Inside the Mind of a Mouse

Neural landscapes inside a mouse brain are part of the Whole Brain Catalog, an open-source 3-D brain atlas created at the University of California, San Diego (UCSD). The program, built around software developed for video games, allows any user to rocket through the brain, tilting and panning to view anatomy and zoom in on individual cells.

Top left: The dentate gyrus of the hippocampus, an area important in memory formation. Magnifying one region by about 10 times, the next image shows a layer of individual granule cells in the hippocampus, looking like rows of pomegranate seeds. Zoom in tenfold again, and the Catalog shows details of a single neuron, including the hundreds of tiny spurs called dendritic spines that form where connections to other cells are made. (These images are derived from actual mouse brains, slightly altered to make cell interiors visible.) The final image shows one of those spines making contact with the green-tinted branch of another neuron—a total magnification of nearly 100,000 times from the first image. The sequence illustrates the “tyranny of scale” in the brain, as project founder Mark Ellisman puts it. The Whole Brain Catalog breaks that tyranny, revealing big and small structures alike.

This information is just the start; the Catalog, as developed by Ellisman and grad student Stephen Larson, provides a framework for collecting the vast information flowing from neuroscience labs around the world. Like Google Earth, the software provides spatial context for many types of information; like Wikipedia, that information will be supplied mostly by users. Ultimately the Whole Brain Catalog could integrate chemical, genetic, anatomical, and electrical data on every point in the mouse brain, permitting researchers to explore all the relationships among them. A project of such scope is possible only through cooperative effort, says Ellisman, a neuroscientist at UCSD. “If we don’t come up with a way of doing this by crowdsourcing, we won’t gain much speed on the problem of the brain. It’s the labor of a generation of scientists.”

To create this image, neuroscientists Davi Bock and Wei-Chung Allen Lee in Reid’s group at Harvard Medical School recorded the activity of dozens of interconnected cells in a living mouse’s cortex. The animal’s brain was then cut in slices a fraction of a micron thick and imaged using an electron microscope. A computer combined the images to create a comprehensive 3-D reconstruction; finally the cell outlines were traced by hand. In the inset, the same neurons are seen in the context of this small block of brain; they appear to peek out from the neural tissue above.

The researchers were able to show not just what the neural cells were doing but how they were linked. This early connectome—a visual catalog of connections in the brain—is relatively modest, but Reid’s group is now using the same techniques to map the anatomical links and interrelated activity of thousands of neurons at once. “We’re not going to be able to trace millions of connections for a number of years, but I’d be shocked if we can’t do this in a decade,” Reid says.