The Nation's Science Report Card Is Out, and It's Not Pretty 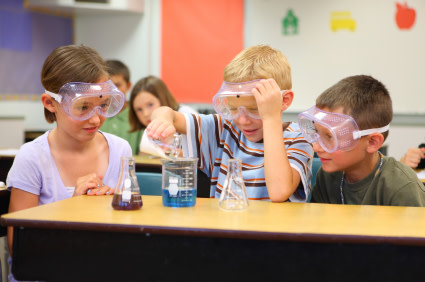 This evening, according to early reports, President Obama will spend part of his State of the Union Address addressing the United States' "competitiveness." But ahead of the national pep talk, the Department of Education brought the mood down a notch. The latest results from a federal test called the National Assessment of Educational Progress were released today, and the "Nation's Report Card" doles out some depressingly low grades for American students' understanding of basic science.

A third of the nation’s fourth-graders, 30 percent of eighth-graders and 21 percent of 12th-graders are performing at or above the proficient level in science.... Fourth-graders considered proficient are able to recognize that gravitational force constantly affects an object, while advanced students can design an investigation comparing two types of bird food. Proficient 12th-graders are able to evaluate two methods to control an invasive animal species; advanced students can recognize a nuclear fission reaction. [Bloomberg]

At the other end of the spectrum, 28 percent of the 4th graders failed to show a basic understanding of science, and that number was up to 40 percent for high school seniors. That troubles Alan Friedman, a member of the board that oversees the test:

"I'm at least as concerned, maybe even more, about the large number who fall at the low end," Friedman said. "Advanced is advanced. But basic is really basic. It doesn't even mean a complete understanding of the most simple fundamentals." [AP]

Demographically, boys showed higher scores than girls at all three of the age groups. But the biggest science education

Whites and Asians outpaced African-American and Hispanic students. Low-income students posted the lowest scores. At the fourth- and eighth-grade level, scores were broken out by individual states, and results showed regional variations. Students in cities tended to score lower than those in suburban and rural areas. And students in the Deep South generally scored lower than their counterparts in northern and northeastern states. [Wall Street Journal]

The dismayed hand-wringing has begun, and so has the finger-pointing. Today some critics loudly blasted the nine-year legacy of No Child Left Behind (NCLB)

"For 9 years, elementary school principals have been telling teachers not to teach science because it's not part of No Child Left Behind," says Francis Eberle, executive director of the National Science Teachers Association in Arlington, Virginia, referring to the 2002 law that requires annual testing of those students in grades three through eight toward a 2014 goal of national competence in those areas. "Now those students are in high school, and we've seeing the consequences of that policy." [ScienceNOW]

It's hard to say for certain, however, whether the "teaching the test" policies that have been an unfortunate byproduct of NLCB are harming science education. The Department of Education changed the science test for 2009, so it can't be reliably compared to past results, the government says. Related Content: DISCOVER: Girl Scouts [Heart] Science

: How do you grow a bumper crop of great math and science teachers? 80beats: “Science Is Cool And Fun”: 8-Year-Old Kids Get Their Bee Study Published