The Myth of the Brain's Pain Matrix?

How does the brain encode physical pain? Which brain areas (if any) respond only to painful stimuli? A new paper reports that one supposedly "pain-selective" brain region, the posterior insula, doesn't actually specifically encode pain - it activates in response to diverse non-painful stimuli as well. The study appears in PLoS Biology and it comes from Giulia Liberati and colleagues of the Université catholique de Louvain, Belgium. Liberati et al. found that the insula responds to non-noxious visual, auditory and tactile stimuli, as well as to painful ones. This was true of every part of the insula they examined, ruling out the possibility of a pain-specific spot within the region. The study included six patients who had electrodes implanted in the insula as part of the programme of treatment for their epilepsy (intracerebral recording). Liberati et al. recorded local field potentials (LFPs) from a total of 72 different sites across all patients, 47 of which were in the insula. Painful stimuli were provided using a small laser. Here's the results from one patient, showing that all categories of stimuli evoked responses. 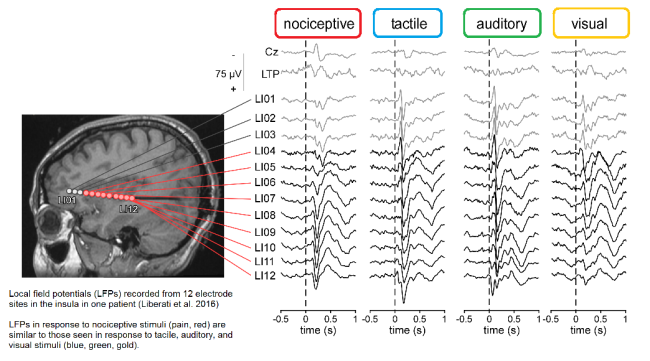 The insula is a region of the cerebral cortex whose function is poorly understood. Among other hypotheses, the anterior portion of the insula has been associated with taste perception and with certain emotions, especially disgust, while the posterior part has been seen as encoding the intensity of pain. Liberati et al.'s data are likely to require a revision of all of those theories. It seems that the insula's role may be more general: Liberati et al. suggest that it is

A hub connecting sensory areas to other networks involved in the processing and integration of external and internal information... [and may form part of] a multimodal salience network [to] allow gaining a coherent representation of different salient conditions, including, but not limited to, pain-related experiences.

The authors do note, however, that they did not record signals from individual neurons. Rather, the local field potentials that they measured reflect the firing of all of the whole population of cells close by the electrode. So it remains possible in theory that pain-specific neurons exist in the insula, mixed up with other ones. What about other "pain-specific" cortical regions? Perhaps they will need a rethink too. While the nerve pathways by which pain signals arrive in the brain via the spinal cord are well understood, and while pain-related subcortical brain regions have been established, the question of whether any cortical areas are pain-specific seems more difficult to answer. Just a few weeks ago for instance, neuroscientists Lieberman and Eisenberger claimed, on the basis of fMRI evidence, that "The dorsal anterior cingulate cortex is selective for pain". However this paper was roundly criticized by Tal Yarkoni, the neuroscientist who developed the software used to perform the analysis. Yarkoni argued that other categories of stimuli activate that area, not just pain. It seems to me that if the pain specificity of the insula and the dorsal cingulate are in question, we may need to rethink the whole concept of the cortical "pain matrix". This "matrix" is an idea which can be found in many neuroscience textbooks: 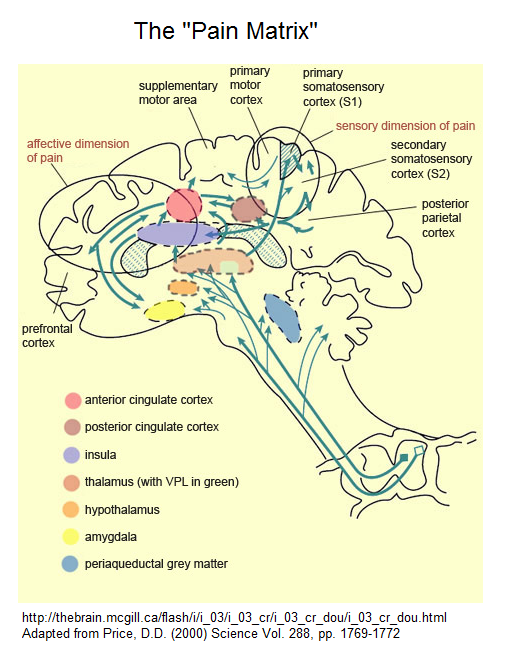 Now, no-one is denying that these regions do respond to painful stimuli. The question is whether they are, in any sense, functionally specific to pain. If not, it might be more appropriate to refer to the matrix by another name - perhaps (although this would have problems of its own) the "salience matrix"?