The Man Who Tried to Weigh the Soul 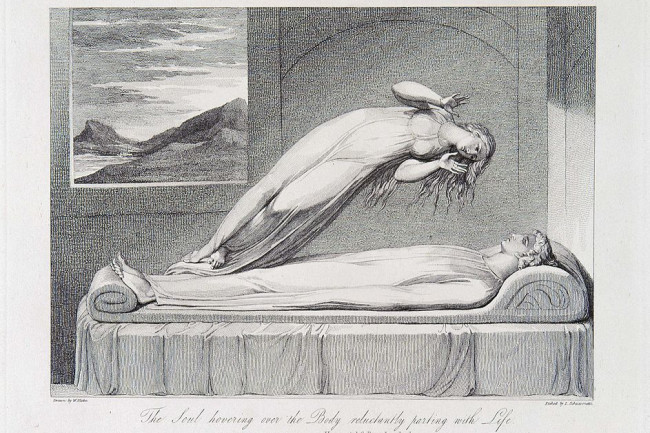 Luigi Schiavonetti's "The Soul Hovering over the Body, Reluctantly Parting with Life, from The Grave, a Poem by Robert Blair." (Credit: Wikimedia Commons/The Metropolitan Museum of Art)

In 1907, a Massachusetts doctor named Duncan MacDougall performed an unusual series of experiments. Intrigued by the idea that the human soul had mass, and could therefore be weighed, Dr. MacDougall put together a bed fitted with a sensitive set of beam scales, and convinced a series of terminally ill patients to lie on it during the final moments of their lives.

MacDougall was nothing if not detail-oriented: He recorded not only each patient’s exact time of death, but also his or her total time on the bed, as well as any changes in weight that occurred around the moment of expiration. He even factored losses of bodily fluids like sweat and urine, and gases like oxygen and nitrogen, into his calculations. His conclusion was that the human soul weighed three-fourths of an ounce, or 21 grams.

It’s hard to imagine these experiments getting any serious attention from the scientific community today. But the lines of thinking that led to them — and the reactions they generated — remain with us to this day. 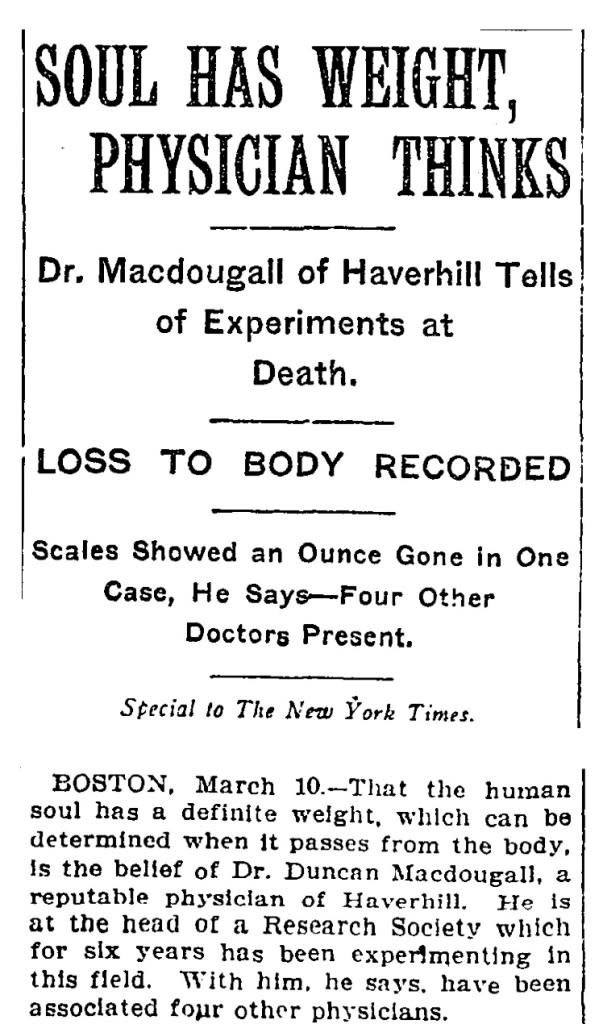 A Year in the Spotlight

The results of MacDougall’s study appeared in The New York Times in March 1907. The article set off a debate between MacDougall and the physician Augustus P. Clarke, who “had a field day” with MacDougall’s minuscule measurement techniques.

Clarke pointed out that at the moment of death, the lungs stop cooling the blood, causing the body’s temperature to rise slightly, which makes the skin sweat — accounting for Dr. MacDougall’s missing 21 grams. MacDougall fired back in the next issue, arguing that circulation ceases at the moment of death, so the skin wouldn’t be heated by the rise in temperature. The debate ran all the way to the end of 1907, picking up supporters on both sides along the way.

For four years, all was quiet on the MacDougall front, but in 1911 he graced The New York Time’s front page with an announcement that he’d upped the ante. This time, he wouldn’t be weighing the human soul — he’d be photographing it at the moment it left the body.

Although he expressed concern that “the soul substance might become [too] agitated” to be photographed at the moment of death, he did manage to perform a dozen experiments in which he photographed “a light resembling that of the interstellar ether” in or around patients’ skulls at the moments they died.

MacDougall himself passed away into the interstellar ether in 1920, leaving behind a small band of ardent supporters, along with a far larger group of physicians who seemed incredulous that this farce had gone on so long. Members of the public settled down on one side or the other, and the discussion fell off the radar.

Except that it never really did — at least not completely.

A Legacy of Oddity

References to MacDougall’s experiments continue to spring forth in pop culture every few years, from the Victorian era right up to today. The idea that the soul weighs 21 grams has appeared in novels, songs, and movies — it’s even been the title of a film. Dan Brown described MacDougall’s experiments in some detail in his adventure yarn The Lost Symbol.

Mention the soul-weighing experiments to a person who’s into parapsychology, and you’ll likely hear a murmur of approval; after all, the idea of scientific proof for the soul offers comfort in much the same way that tarot readings and hotline spiritualists do. Even among more skeptical folks, it’s a topic that comes up now and then in late-night discussions: “Wasn’t there once a guy who tried to weigh the soul…?”

The experiments’ actual results, and their failure to achieve acceptance as scientific canon, are entirely beside the point. Science has gone one way, and pop culture another. Functional neuroimaging has tied every conceivable function once associated with the soul to specific regions and structures of the brain. Physics has mapped the linkages between subatomic particles so thoroughly that there’s simply no space left for spiritual forces.

The idea of weighing the soul remains with us. It’s romantic. It’s relatable. It speaks to some of our deepest longings and fears that gripped MacDougall’s readers back in 1907 and still captivate us today.

A Different Kind of Eeriness

To understand why MacDougall wanted to weigh the soul — and why he thought he could — it helps to understand the environment in which he operated. His work is rife with terms and ideas recognizable from early psychological theorists Freud and Jung. There’s a lot of talk about “psychic functions” and “animating principles” — a grasping for the precise scientific language to describe consciousness, and life itself, in a world still ignorant of fMRI and DNA.

We’re still profoundly ignorant today, as any honest scientist will tell you. Certain behaviors of quantum particles still baffle the brightest minds; and we’re still a long way from understanding exactly how our brains do most of what they do. We keep looking for the dark matter that constitutes more than 80 percent of the universe’s mass, but we haven’t actually seen a single atom of it or know where, exactly, it is. 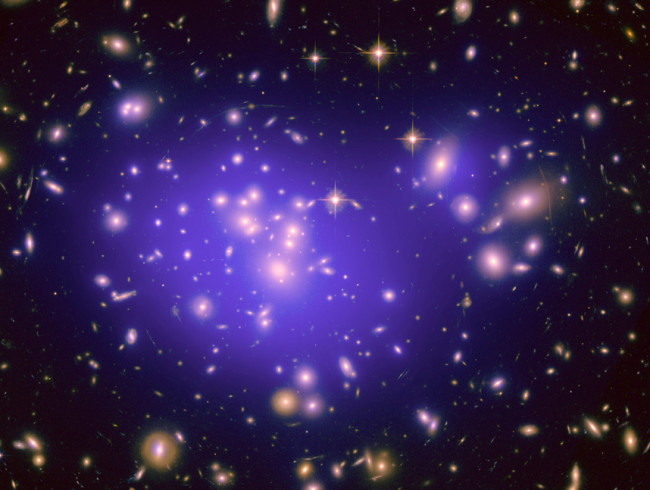 Dark matter cannot be photographed, but researchers can detect it and map it by measuring gravitational lensing. Its distribution is shown here in the blue overlay of the inner region of Abell 1689, a cluster of galaxies 2.2 billion light-years away. (Credit: NASA/ESA/JPL-Caltech/Yale/CNRS)

And in all these dark corners, we still find people looking for the soul. Some claimwe’ll eventually discover it among quantum particles. Others insist it’s got something to do with the electromagnetic waves our brains generate. Most scientists reject these claims. But these researchers and theorists soldier on, unwilling to give up hope that one day we’ll be able to weigh, measure and quantify the hereafter.

But in 1907, as today, the real, testable, verifiable universe continually proves to be much stranger than anything parapsychology can dream up. How are photons both particles and waves and yet somehow neither? How can there be so many planets in our galaxy, yet so few that harbor life — we think — as we know it? The universe is full of real unsolved mysteries, whose real answers are out there somewhere.

We don’t need the souls of the dead to craft a haunting series of experiments. The measurable, physical universe is more than eerie enough.