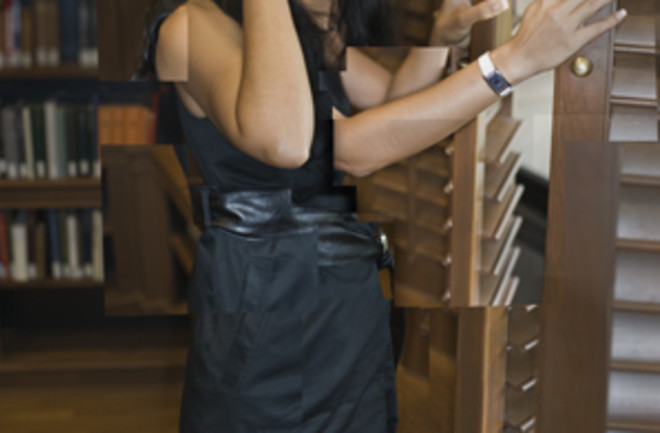 Love is celebrated as a many-splendored thing, while lust is commonly regarded as downright primitive. Leave it to a Frenchwoman to discover that sexual desire is actually quite brainy. Stephanie Ortigue, an assistant professor of psychology at Syracuse University, uses brain scans to examine the divine madness of love and the blinding imperative of lust. Her goal: illuminating how these two forms of attraction work by mapping out which brain regions are active when we experience them. Her findings counter the assumption that desire is a simple animal urge motivated primarily by biochemistry and evolutionary directives.

Working with her frequent collaborator, psychiatrist Francesco Bianchi-Demicheli of Geneva University Hospital in Switzerland, Ortigue has found that lust involves complicated cognitive processing. Love, too, is not quite what we thought. Both romance and desire, she says, may be expressions of a “top-down” process in which intellect rules over instinct, not the other way around. Love may even make you smarter, by helping your brain process information more quickly.

Why do you study the neuroscience of love and sex? I’ve always been interested in the big questions of science, and love is one of the biggest questions in the world. Everyone feels it, knows what it is, but we can’t really define it. I like challenges, and I like to bring some rationality to things that seem irrational. Also, I’ve always been interested in the unconscious and consciousness and how the two interact in our daily life. We’ve found that a lot of unconscious processes are involved in love and desire.

What did you expect to find, and what has surprised you? We all know that love and sex activate the limbic system, the emotional center of the brain. But I wondered if we could find more beyond that. Our results suggest that love and sex are not just animal processes; they are much more sophisticated and intellectual than we thought. In brain scans of people feeling sexual desire, we did find that visual areas and emotional areas were activated. What was surprising was the activation we saw in another brain region, one involved in complex cognitive processes.

How do you study the way people respond to desire? We put pictures of good-looking people on a computer and asked participants to press a button every time they were attracted by a picture. We recorded their reaction times and found that responses were much faster when the participant was not attracted to someone. It’s very easy to say, “Oh, no, he doesn’t turn me on.” But it took much longer for people to determine if they were attracted to someone, if they were feeling desire.

We analyzed the subjects’ brain activity with 128-electrode, high-density EEG [electroencephalography] and compared their brain activity while they were feeling desire with activity when they were thinking, “No, not for me.” When the subjects had no feeling of desire, we saw activity in an area involved in body recognition called the extrastriate body area, indicating, as you might expect, that they were evaluating the body they saw in the picture. But when they were feeling desire, we saw activation not only in the extrastriate body area but in a brain region called the temporo-parietal junction, which is known to be very important for the understanding of the self and one’s own body image. This suggests that sexual desire isn’t just a matter of evaluating a body. The brain is also doing some more surprising cognitive work.

With EEG, we know not only where desire occurs in the brain but when it activates each region. And we found this interesting dynamic: First we found activation in the visual area, and then following that—very fast, so it’s still unconscious—we found lots of activity in this region [the temporo-parietal junction] that’s involved in body image, and then back to the visual.

Why do you think we are able to find someone unattractive more quickly than we’re able to judge them desirable? It’s as if you have an unconscious checklist in your mind: Does this guy fit my checklist or not? If there is one point that doesn’t match, the guy is rejected. But if he passes the first point, then you have to check the next one and the next one. The thing that’s fantastic about the desiring mind is that it all happens so quickly. Within 200 milliseconds our brain knows whether we desire someone—before we know it consciously!

If the temporo-parietal junction is involved in our own body image and sense of self, why does it engage when evaluating other people? Ah, that is a very interesting question. We believe everything that happens to “self” is stored and processed in this temporo-parietal junction because it is important for integrating information and abstract concepts. So all the experiences you’ve had with desire, including positive experiences, are stored somewhere there—not just in the hippocampus [the primary memory-storing area of the brain]. When you meet a new person, your past experiences influence your evaluation of the person in the present moment.

You have also looked at the cognitive process of love. What did you find? Again we were interested in how the unconscious influences behavior. We presented each participant with the name of his or her beloved on a monitor, subliminally [faster than the threshold of awareness], and contrasted that with the name of a friend and the name of a stranger.

Then we asked the participants to do a demanding cognitive task that required focused attention. Love is supposed to activate the dopamine system, which is involved in reward and pleasure but also plays a role in cognition and movement. Our hypothesis was that if love activates the dopamine system, it should boost functions related to that system, like cognition and motor functions. So we should see a faster reaction time.

We found a huge and significant effect when we presented the name of the beloved: The participants were much faster at the cognitive tasks that we were asking them to do, but only when we asked them to do challenging tasks. When we asked them to do less demanding tasks, we didn’t see the same effect. We believe that passionate love activates a specific brain network that helps people make faster cognitive connections and mental associations. It isn’t just speeding up their motor skills.

Do the patterns of brain activation associated with love overlap with those for lust? We see two different networks for love and desire, but we’re still trying to understand how they differ. They have common areas in the parietal lobe and the temporo-parietal junction. The desire network is more complex, more distributed than the love network. It’s the opposite of phrenology: There’s not just one part of the brain that does it all.

Are there practical applications for this research? Yes, absolutely. If love and desire involve regions of the brain that govern the sense of self, then by understanding self-image we can not only help people who have body-image disorders, such as anorexia, but also help people who have desire and sex disorders. There is a famous saying in French, “Love yourself before you love others.” It’s a cliché, but maybe there is some truth to it.