The Limits of Fight-or-Flight Training 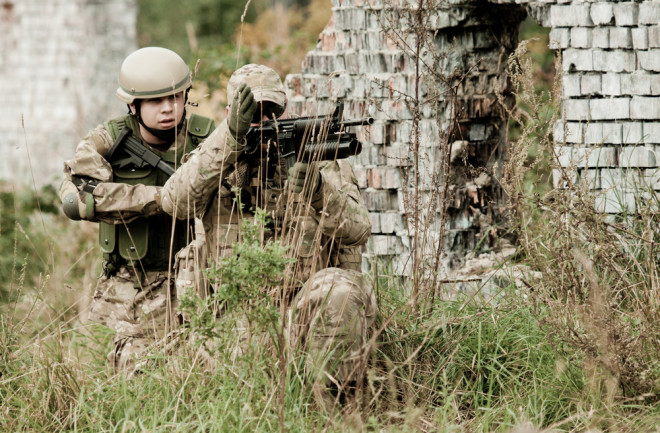 (Credit: Adam Ziaja/Shutterstock) The soldiers at Checkpoint 56 ordered the woman to stop. She was Palestinian, the soldiers were Israeli, and this checkpoint divided the Israeli and Palestinian-controlled sections of Hebron on the West Bank. The checkpoint’s metal detector had gone off when the woman walked through. The soldiers ordered her to raise her veil. She refused. Then she pulled a knife. The soldiers fired at her legs and feet. She rushed at one of them, knife raised. He fired into her abdomen. She died in a hospital in Jerusalem a few hours later. She was 18 years old. Most of us are sickened by stories like these. Yet very few of us know what we would do in the same situation when adrenaline offers two stark choices: fight or flee. Even soldiers can react unpredictably in the life-or-death situations they’ve trained for. The U.S. military is now pouring hundreds of thousands of dollars into research on the fight-or-flight instinct, and on ways to mitigate it in combat. They’re discovering that it may be possible to tame this natural response, but better soldiers and police officers come with a cost.

In 2012, the Pentagon’s research division DARPA awarded a $300,000 grant to Alaa Ahmed, a professor of integrative physiology at University of Colorado at Boulder. They asked Dr. Ahmed to look for neurological links between threats and instinctive movements, with the aim of training soldiers to cut those links. The goal was a new breed of soldiers who, in life-or-death moments, would reject emotion and instinct in favor of rational decision making. Ahmed calls her DARPA research “speculative,” but she’s not the first researcher to dream of fear-free enforcers. Ancient Spartan and Roman military training sought to eliminate the natural instinct to run away in the heat of combat by building strong bonds between the men and harshly punishing any hint of cowardice. Desertion was punished by death in Genghis Khan’s army, Napoleon’s forces, and under some commanders in both world wars. Only recently, though, have commanders sought to understand the science behind the fight-or-flight instinct. Over the past two decades, militaries and police departments around the world — particularly in the U.S. — have participated in dozens of studies on the neurology and psychology of combat panic. Many organizations have updated training regimens as a result – adding a focus on awareness of one's own mental state, and training specifically for situations that cause panic. Soldiers and police officers panic, researchers have found, for three main reasons. The first is that they don’t know or remember exactly how they’re supposed to respond. The second is that they’re not aware of their own impaired decision making when their adrenaline takes over. The third is that they’ve been taking too many shifts, working too many hours, running on adrenaline all the time, and they’ve forgotten what it’s like to make calm decisions. Long-term stress takes its toll on our brains. It weakens neural connections that help us form factual memories, and strengthens connections involved in emotion. Stress increases activity in the amydgala, an almond-sized brain area associated with fear and anger. It drains serotonin and dopamine down to levels far below the norm, and it impairs decision making and cognitive function. The more we come to understand about each of the factors that contribute to panicked decisions, the better we understand how to counteract them. But the more we learn, the more we realize there’s only so much we can do. Limits of Training The term “fight or flight” dates back to the 1920s, when psychologist Walter Bradford Cannon coined it to describe a neurochemical “discharge” that prepares an animal to fight or run. When we encounter a sudden threat, our adrenal medulla pumps out hormones that trigger various glands to flood our bloodstream with epinephrine, better known as adrenaline, along with a potent cocktail of norepinephrine, estrogen, testosterone, cortisol, dopamine and serotonin. Our heartbeat and breath quickens. Our pupils dilate. Our stomachs clench. Embarrassingly, our sexual organs may wake up. In a flash, we’re ready for survival – primed with greater strength, heightened awareness, and quicker reaction time.

Police officers and other emergency personnel staged an active shooter exercise in Manhattan's Lower East Side on Nov. 22, 2015. (Credit: a katz/Shutterstock) That initial response, it seems, may be all but impossible to train out of people. Drugs can dampen it. Meditation can keep it in context. But if our bodies didn’t rise to stressful occasions at all, we wouldn’t be human. Modern combat stress training targets the ways people respond in the midst of that neurochemical storm. One way to stay in control is to drill, endlessly, through every variation of a stressful event – simulating confrontations with armed assailants, rescuing houses full of hostages, and keeping distance from strangers who might be carrying explosives. In a real-world moment when everything reverts to instinct, soldiers hope, their training will take over. A growing number of programs also emphasize mindfulness, sometimes known as situational awareness. These programs train soldiers and police officers to note every detail of their surroundings and maintain a broad awareness of the situation as a whole – including their own emotions, physical sensations and gut instincts. Stay aware of everything, the thinking goes, and you’ll stand a better chance of making the right call; or of knowing when it’s time to call it quits and retreat. All this can only take us so far. We know the neurochemistry behind the fight-or-flight response. We know the statistical likelihood that a soldier or police officer will respond in a certain way in a certain situation, and we can take steps to tip those statistics toward better outcomes. But an individual soldier or police officer, in his or her own life-or-death moment, remains a black box to us. When all the postmortem analysis is done, we simply don’t know why, all else being equal, certain people snap and do something regrettable — or panic and flee — while others don’t. We do, however, know what happens afterward.

It’s no secret that many of our veterans are coming home with post-traumatic stress disorder. One infamous marine unit has seen 13 suicides since 2012 — more than 10 times the rate for average Americans. More than 100 U.S. police officers commit suicide every year, and many cited combat flashbacks as a reason. The fight-or-flight response activates a distinct memory system that normally sits dormant. This system burns every detail of a stressful moment straight into long-term memory storage, in ultra high definition. Those sounds, smells and facial expressions stay with us forever. They come back to us unexpectedly, clear as the moment they happened – often triggered by a sight or sound that reminds us of the stressful situation; other times seemingly out of nowhere. For all the emphasis that modern combat training places on conquering panic, it has remarkably little to say about what to do after the adrenaline fades while the memories remain sharp. When traumatized police and military veterans seek help, many report being called “slackers,” and are told to “toughen up and move on.” An unknown number of them suffer in silence as a result. We can attempt to train the panic out of our soldiers and police, but we can’t train the memory away. The stress-memory system is rooted in some of our most ancient brain structures, and in many of the same areas that set off the fight-or-flight response in the first place. We can’t turn off panic itself — or the memories it etches into us — without turning off something fundamental about our humanity. We can, however, find more effective ways of helping people who’ve been traumatized by life-or-death moments. Training them to accept and work with their memories would be a good start. If you’re a U.S. police officer contemplating self-harm or suicide, please reach out to the Cop2Cop hotline at 1-866-267-2267. If you’re in the U.S. military, call the Veteran’s Crisis Line at 1-800-273-8255.