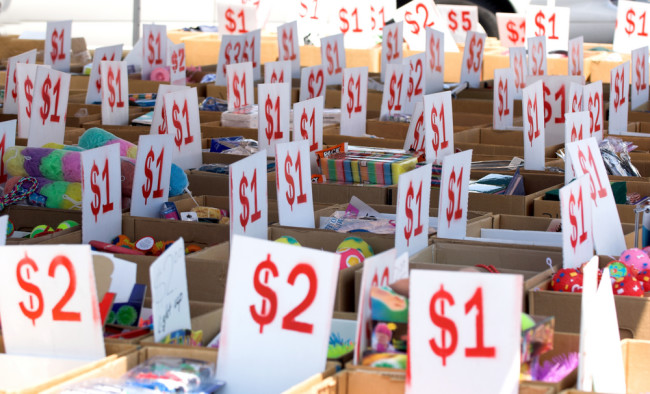 While someone’s bargaining position can be shaped by competition, we economists know that there is a big gray area in our ability to predict negotiated prices. Competitive options for buyers and sellers can define a limit beyond which they will not go, but there is still a range of prices that fall within those limits. Within that range, clearly sellers would like a higher price, while buyers would like a lower one, so each has an incentive to signal to the other their willingness to be a tough negotiator. Sometimes, however, you might want to send a signal that you might be willing to be less tough. Why? Because negotiations take time, and you might want to get a deal done quickly. For instance, you may be moving to another city and wish to sell your house in a hurry. The usual means by which such a signal could be sent is to simply lower your starting price. But for some goods — where quality is hard to observe, such as real estate — lowering the price may be difficult to do, at least in small increments. This is the traditional asymmetric information or adverse selection story, where if a seller has a product of high quality, they can’t use higher prices to convince the market that they are still not a low-quality seller in disguise.

So how else would you signal your willingness – or unwillingness – to be "flexible"? When there are sellers around with differing levels of patience, both signals are desirable for those who know how to use them. In a new paper, Matt Backus, Thomas Blake and Steve Tadelis look at this issue within the confines of eBay’s structured negotiation platform. While we often associate eBay with auctions (rather than straight out sales), that hasn’t been eBay’s main business for about a decade. Instead, most trades are listed for a specific or “buy it now” price, and the seller may give you the option of making them an alternative offer. So a seller of an iPhone may list a price of $1,000, and someone might come back with a counteroffer of $800, to which the seller could then accept or make a new offer. This could go on for about three rounds (eBay rules) and may last about a week. But if the seller wanted a quicker negotiation, what could he do? Backus, Blake and Tadelis discovered an interesting way to do just that, which is summarized in the following chart. 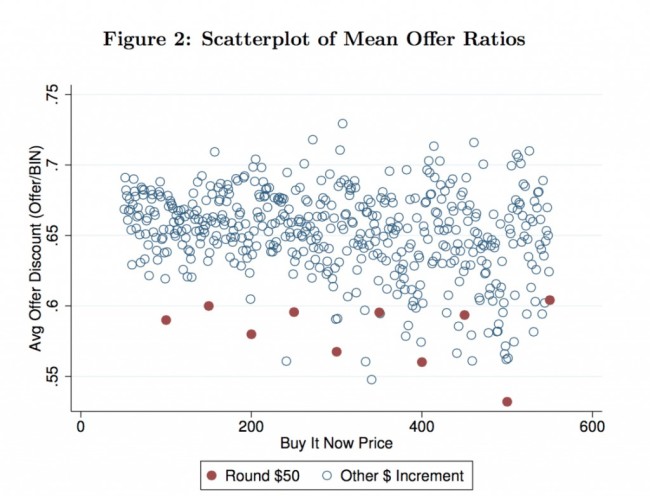 The x axis refers to the initial price and the y axis to the subsequent counteroffer. The red dots are round initial offers (in increments of $50), while the blue circles stand for all other opening prices. The chart shows that initial offers in round figures typically lead to counteroffers that are 55% to 60% as high, significantly less than non-round prices. All items are taken from eBay’s collectibles category in 2012 and 2013. Credit: Backus, Blake and Tadelis

The chart shows that when the posted initial price is of a round number (the red dots), like $1,000, the average counteroffer is much lower than if it is a non-round number (the blue circles), like $1,079. For example, the graph suggests that you can actually end up with a higher counteroffer if you list $998 rather than $1,000. In other words, you are better off initially asking for a lower price if price was all you cared about. Backus et al postulate that what is going on here is “cheap talk” – that is, an easy-to-make statement that may be true or untrue with no consequences for dishonesty – and not an otherwise reliable signal. There are some sellers who don’t just care about price and, absent any other way of signaling that to buyers, they set their price at a round number. Alternatively, you can think that the more patient sellers are using non-round numbers to signal their toughness. Either way, the last two digits of the price is cheap talk. The rest of the paper does the econometrics to back all this up and is (except for one really interesting thing that I’ll get to in a moment) as robust as the graph suggests. End your price with “00” and you receive offers that are 5% to 8% lower, more likely to finish six to 11 days sooner and 3% to 5% more likely to sell at all. This is pretty interesting because the last two digits of a price essentially tell you nothing about anything else. Nor do they make much of a difference to the price. This is the first paper I am aware of that uncovers a plausible cheap talk equilibrium; that is, where people use a simple unverifiable statement and it is believed as intended.

But wait, there’s more. The authors wanted to see if their analysis would work in other markets and whether they could guess what the cheap talk prices would be. While we know that round numbers seem to be the focal point, we don’t know that for sure. And so they checked. And what they found was that while the effect they observed didn’t happen for all other prices, it did arise for prices that ended in 99! These days, those prices are the “normal” ones used at any grocery store or shopping mall and, as it turns out, they send the same type of signal as the “00” prices. If you look at the graph closely, you can kind of see that. Does this arise elsewhere? The authors grabbed some real estate data and here are the results: 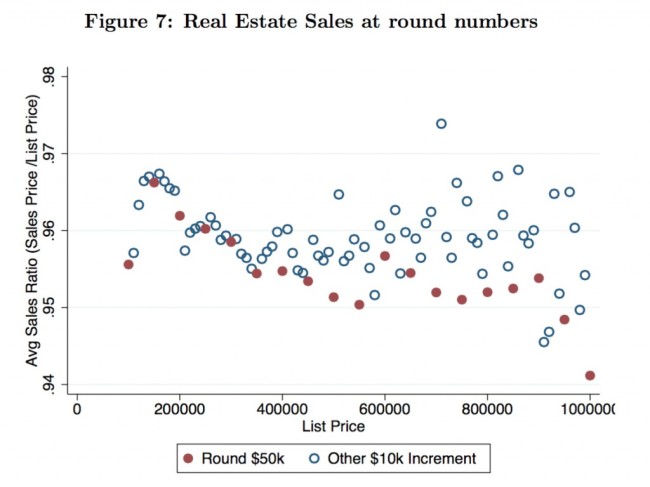 This chart is similar to the other one except that the data come from Chicago real estate listings. Credit: Backus, Blake and Tadelis There is it again. So if you want to sell your house quickly, pick a round number. As it turns out, real estate agents then understand the signal. Alternatively, if you want to sell for a higher price and are willing to wait, your agent will advise you to pick an odd one. This is one of those things I certainly didn’t know about, but it is clear that enough people in the market did. One wonders what other cheap talk signals lie in our economics future.