The Kind of Face Only a Wasp Could Trust 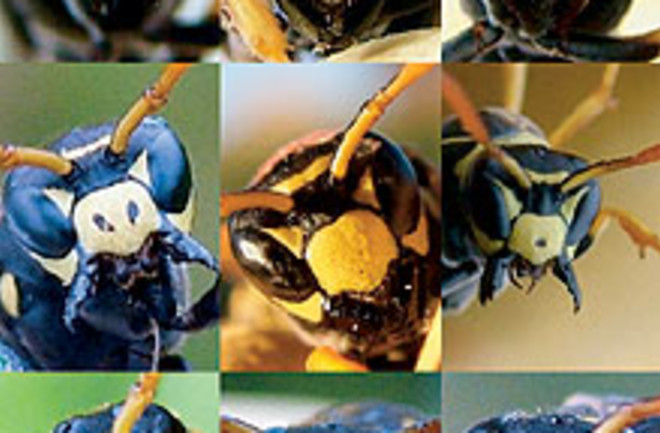 Which wasp is boss? Paper wasps with one spot or none are at the bottom of the pecking order; those with the most are on top. | Courtesy of E. A. Tibbetts and J. Dale

Paper wasps would be lousy poker players. Their faces always give them away, and any attempt at bluffing only earns them a beating—the first evidence of how animals police one another to keep social signals honest.

Elizabeth Tibbetts of the University of Arizona was drawn to paper wasps because of the way they establish hierarchy within the all-female colony. After female wasps mate, they fight each other to establish their rank: The higher it is, the more egg laying and the less work they have to do. Tibbetts found that a lot of fighting is not necessary, however, because the wasps signal their strength and status with the number of black splotches on their bright yellow faces (more splotches denote higher status). That got her wondering. It’s not hard to produce a splotchy face, she noted, so why wouldn’t more paper wasps have evolved the appearance of high rank?

To find out, Tibbetts and a colleague created cheaters. Daubing some of the insects’ faces with paint, Tibbetts made their status appear higher or lower than it really was. Individuals caught in a lie during battle suffered endless harassment afterward, she discovered. Surprisingly, this was true whether the paint overstated the insect’s ability or understated it. Either way, the group showed zero tolerance for social fakers. Mutant wasps whose real faces mismatched their abilities were similarly weeded out by the others. For the most part, the wasps have evolved face splotches that accurately signal their body strength. “When one wasp is a cheater,” Tibbetts says, “the fighting never settles down.”