Ten years ago, ketamine was a drug best known for its popularity on the rave scene. Yet it has since enjoyed a remarkable rebirth - as an antidepressant. Starting out with a handful of small clinical trials, there are now numerous reports that ketamine produces rapid antidepressant effects. In the US, various clinics have sprung up offering ketamine treatment to depressed patients - at least the ones able to pay the bill, because insurance doesn't tend to cover it. Now, a group of psychiatrists from the American Psychiatric Association (APA) has put together A Consensus Statement on the Use of Ketamine in the Treatment of Mood Disorders in the journal JAMA Psychiatry. 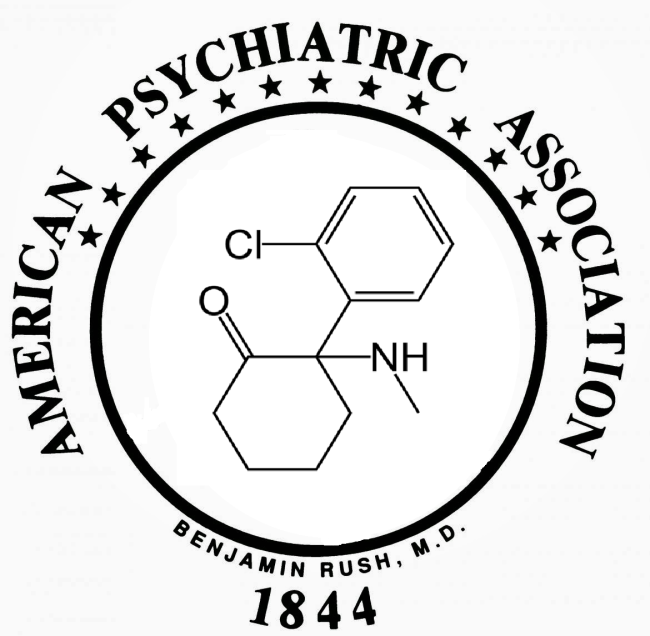 Let's look at the authors list first. Lead author Gerard Sanacora is a veteran ketamine researcher, an author on one of the first ketamine-antidepressant papers. At #2 we have Mark A . Frye, who regular readers might remember from this post in 2015. Then in the senior author position, we have perhaps the world's most notorious psychiatrist outside of fiction: Charles "Paxil" Nemeroff. What justifies Nemeroff being an author is unclear because he has never published original research on the drug, although this is his fourth "opinion piece" on the topic. The other authors are mostly ketamine researchers. Notable by his absence, however, is Carlos A. Zarate, who led the pioneering early ketamine clinical trials. The authors wrote on behalf of the APA 'Council of Research Task Force on Novel Biomarkers and Treatments', but they stress that the piece is not "endorsed or promulgated as policy of the APA." and that it's not a "standard, guideline, clinical policy, or absolute requirement." In other words, ketamine clinics and prescribers are under no obligation to comply. So what does the consensus statement say? It's a pretty brief document and it contains few surprises. The statement says that ketamine is probably helpful in depression, but the effects are short-lived. Regular repeated treatment (twice per week) may help extend the effect, but there's little good data on this. In terms of safety, the authors say that few serious side effects of ketamine in depression have been reported so far. Nonetheless, to ensure safety, they recommend that ketamine should only be administered by trained medical personnel in a facility with at least basic medical equipment. The authors warn against the idea of giving patients ketamine to take at home. Overall, the consensus statement seems eminently sensible. But I'm still a little worried. My concern is not with the content of the statement, but with the very fact of its existence. I suspect that ketamine clinics and other prescribers will be pleased to see this document because it represents official recognition that ketamine is a bona fide, albeit experimental, treatment. This may not be official APA guidelines, but this is still a document of guidance and it's from the APA. So while Sanacora et al. don't recommend ketamine as such, they legitimize it. This is a concern to me because I have long-standing, nagging doubts over the evidence suggesting that ketamine is an antidepressant (my posts: 1, 2, 3, 4, 5). In a nutshell, in my view it's impossible to rule out the possibility that much or all of the apparent benefit is due to the placebo effect. That said, if people want to try ketamine, and they can afford it, I say go for it. I hope it does work. I'm a depression sufferer myself and I'd consider it if I were depressed in future. However, I would consider it on the grounds of "sounds interesting, can't hurt", rather than because it's an evidence-based treatment that's been proven to work. My concern here is that Sanacora et al.'s consensus statement may create the impression of a solid evidence base when, in my view, the evidence is built on wobbly foundations. HT: @BZarebad