The Imagination Effect: A History of Placebo Power 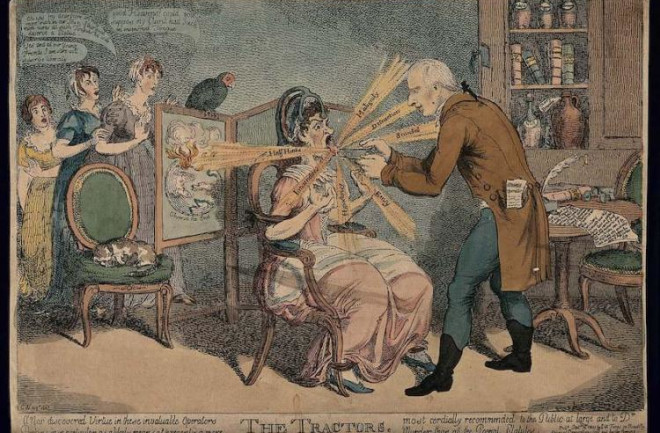 Perkins tractors, touted as cure-alls, were all the rage at the end of the 18th Century. An early “placebo” trial found they didn't work. This 1802 caricature shows a society lady being treated with a Perkins tractor to cure her “venomous tongue”. (Credit: C. Williams/Wellcome Collection/Knowable Magazine)

A patient swallows a sugar pill that lacks active medicine, or undergoes “surgery” in which incisions are made but the therapeutic procedure is not performed. And yet pain falls away, nausea recedes, mood lifts. Sometimes, the improvements were going to happen anyway. But other times, what’s at play is the power of the mind to influence the body.

This, the famous placebo effect, has a long, rich history — it certainly had an outsized role in the medicine of centuries past, when useless pills and potions were often all that physicians had to offer. Many among the learned knew what they were dealing with: “There are men on whom the mere sight of medicine is operative,” wrote the French philosopher Michel de Montaigne in 1572.

The first scientific demonstration of the placebo effect came in 1799 when a British physician, John Haygarth, set out to test one of the quack remedies on sale at that time: expensive metal rods named Perkins tractors that purported to draw disease from the body. Haygarth pitted these rods against sham, wooden Perkins tractors that looked just the same as the 5-guinea ones on sale, and found that 4 of 5 patients with rheumatism reported that their pain improved. (He published his findings in a book, On the Imagination as a Cause and as a Cure of Disorders of the Body.)

Haygarth did not use the term placebo effect for what he’d seen. Though the word  placebo had long been used in other contexts, the term as it’s used today was introduced in a 1920 paper in  The Lancet.  Placebo effect entered clinical vernacular some decades later, after American anesthesiologist Henry K. Beecher observed that some wounded men from the battlefields of World War II often fared well without morphine. Since then, the many studies done on placebo effects show them to be strongest in conditions where perceptions are key, such as pain, anxiety and depression.

At Beecher’s urging, placebos were also put to work in new ways in the modern scientific era: They became mainstays of gold-standard, double-blind clinical trials to better elucidate a medicine’s true effects. In the purest form of such trials, only a subset of study participants receives a substance being tested. The others get a sham substance, and nobody knows who got what till the results are in and the study is “unblinded.” A drug can only be said to work when it outperforms the placebo in a statistically significant manner. (In many modern trials, an experimental treatment is compared against standard of care instead of a placebo, for ethical reasons.)

Of course, the fact that placebos can influence patients’ perceptions and symptoms complicates the matter: It means that a drug being tested has to perform not just better than nothing — it must also best the power of mind over body.