The illusions of intuition 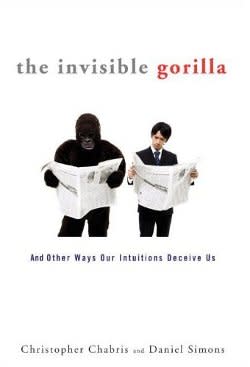 Sometimes books advertise themselves very well with their title. The Invisible Gorilla: And Other Ways Our Intuitions Deceive Us is one of those books. Alternatively it could have been titled: "Giving thinking a second chance." Or, with an eye toward pushing copies: "Why everything Malcolm Gladwell tells you is crap." And finally, a more highbrow possibility: "Reflection: man's greatest invention." The "hook" for The Invisible Gorilla is the experiment which goes colloquially by the same name. The authors of the book, Christopher Chabris and Daniel Simons, actually wrote the paper Gorillas in our midst: sustained inattentional blindness for dynamic events (though they note that the basic insight goes back to the 1970s). Here's a YouTube clip illustrating Chabris & Simons' set up. Despite the eye-catching way the authors grab your attention the core message of The Invisible Gorilla is often very Plain Jane: thinking is hard, it yields real results, and, beware of short-cuts. Many sections of the book read as counterpoints to the counterintuitive defenses of intuition which Malcolm Gladwell presents in Blink: The Power of Thinking Without Thinking (Gladwell as it happens played a key role in popularizing knowledge of "the invisible gorilla" phenomenon). Despite being "sexed" up in the past few decades the defense of intuition, of "gut," has a long intellectual history. For every Kant there is a Wang Yangming. And yet the borderlands between intuition and deduction, reflex and reflection, can often be gray. I would argue that much of human culture actually emerges from rational extensions of intuition. David Hume famously asserted reason's slavery to passion, but I think a less grand way of characterizing the nature of different aspects of cognition is that they complement and supplement each other (see How We Decide). Chabris and Simons cover more than their famous invisible gorilla experiment. Rather, it just serves as a doorway into a whole world of cognitive distortions, illusions, and fallacies. Many of these emerge from what we think we know about ourselves, and an inattention to the reality of the shortcomings of our own minds. These deceptions are explored across six chapters, but it is the conclusion where I think one can illustrate the deep insight The Invisible Gorilla can give us into leading fuller lives. Telling us how to think, not just how we think. Specifically, Charbis and Simons give an illustration of a circumstance where intuitions are of use, and why they are of use. They recount an experiment where students were given five different strawberry jams of very different quality (as rated by Consumer Reports) and asked to list their likes and dislikes. Then they were asked to rate the quality of jams on a scale of 1 to 9. In a separate treatment the students were given the jams to taste, and then asked to write about why they chose their major in college. Then they rated the jams again, 1 to 9. In the second condition the students gave ratings much closer to the experts than in the first. This seems a case where thinking hard and deeply about the issue only muddled the outcomes, while intuition was validated. What's going on? First, Chabris and Simons suggest that the students were not adding any new relevant information by listing their likes and dislikes. Second, one's perception of taste is primarily, though not exclusively, related to a visceral emotional reaction. In matters of personal taste it makes good sense to go with one's gut, especially if the taste has a strong necessary connection to the real gut! In contrast, deliberate rational thought will beat intuition when you have more conscious access to the data for any given task. Both the authors of The Invisible Gorilla were chess players at a high level, and their narrative is laced with their own reminiscences about the chess-world. They note that expert chess players can usually beat lesser players even if they give their opponents far more time to think about their moves. One model which can explain this is that the elite chess players have an intuitive grasp of the game and can "recognize" the pattern of play without having to engage in ratiocination. Charbis and Simons show in fact that under conditions of time pressure excellent players increase their error rate by 36 percent. This hints to the likelihood that there are finite cognitive resources being brought into play which are reflective, not rapid fire reflex, in moments of decision making in chess. Of course the distinction between reflex and reflection may seem academic from the outside, but there is a difference when it comes to how one learns, and the preconditions of virtuosity. At the end of the day The Invisible Gorilla reinforces some very old-fashioned maxims about the importance of hard work, care in system-building, and intellectual humility. The exact virtues which are theoretically baked into the cake of modern institutional science. Chabris and Simons reveal that the emperor of intuition often has no clothes, but they give us hope because reflective cognitive processes have a track record of building upon themselves, and extending into directions which have allowed us to construct the material civilization we see all around us. In contrast in areas where an intuitive aesthetic sense is at a premium I do not have great confidence that moderns have exceeded the ancients.