The Hunt for the Prehistoric Roots of Cancer 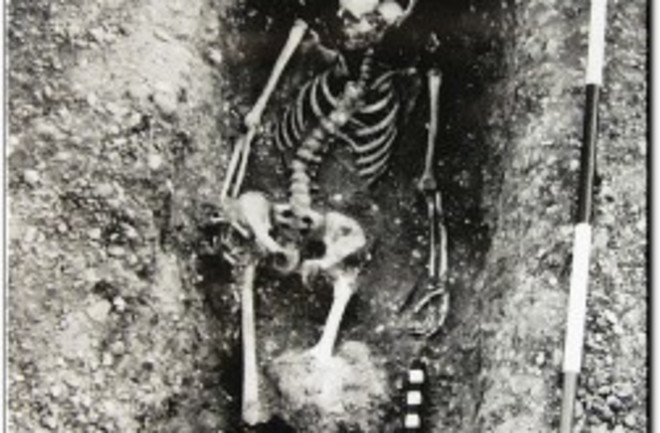 A tumor on the leg of a medieval Saxon man. Photo courtesy the Natural History Museum, London. When you search the archives for the first known case of human cancer you come across the story of a prehistoric hominid called Kanam Man. The only remains that have been found of this relative of Homo sapiens is a petrified jawbone, and inside the curve of the tooth line is a large lump that many scientists believe to be osteosarcoma, a cancer of the bone. The Kanam jaw, discovered in Kenya in 1932 by Louis Leakey, was my portal into the world of paleopathology and, in particular, the obscure sub discipline of paleo-oncology -- the search for the ancient roots of cancer. I tell the story in chapter 3 of The Cancer Chronicles, which is excerpted in the current issue of Discover. In the piece, "The Long Shadow," I also write about Egyptian and Peruvian mummies and early medieval skeletons -- an accumulating body of evidence that cancer has been with us all along. There was an ancient Scythian king whose skeleton, retrieved from a royal burial chamber, was eaten by what appears to be metastatic prostate cancer, and an Egyptian woman whose face was all but destroyed by nasopharyngeal carcinoma. Visually the most striking example may be an enormous tumor the size of a basketball growing on the femur of an early medieval Saxon man. Finding cancer in the distant past shouldn't be surprising. All of us multi-celled creatures -- the metazoans -- are the result of an evolutionary compromise. Each individual cell is granted enough power and autonomy to ensure the robustness of life, yet it must work in accordance with its neighbors. When this delicate balance is upset, the cell reproduces like mad, dividing and dividing, and a tumor begins to grow and evolve like an aggressive new species in the ecosystem of the body. What it takes to get the process going is the right combination of genetic mutations. Some might be the result of exposure to external carcinogens -- there were plenty occurring naturally in prehistoric times. But most mutations happen spontaneously. Whenever a cell divides, it must duplicate its genome and pass along the copies to its children. Errors inevitably occur, and some of them -- purely through the luck of the draw -- will give the cell an evolutionary advantage over its neighbors. Cancer, in short, is inevitable. The question for paleo-oncologists is how prevalent it was in the past compared with modern times. I described the controversy in an article for the New York Times, "Unearthing Prehistoric Tumors." Altogether I counted about 200 possible cancer sitings in the human fossil record. That sounded at first like a very small number. Then I considered how low the odds are that signs of ancient cancer would be discovered at all. Except for a few rare cases in mummies, only bone tumors will be found -- those originating in skeletal tissue or spreading there from other sites. These count for only a small fraction of all cancers. About 90 percent are carcinomas, tumors forming in the epithelial tissues that line the organs and cavities of the body and form the skin. Almost all of these will be lost as the body decays -- except for the fraction that metastasize to the skeleton. Even when cancer does spread to bone, the markings may not survive. Bone-eating lesions can cause a specimen to crumble and disappear before it is discovered, or as it is being removed from the ground. And of those few clues that survive, only some will be noticed by anthropologists. For every case that is discovered countless others will go unrecognized. Some scientists have surmised from the sparse evidence that cancer was practically nonexistent before the ravages of civilization. But that is the minority view. Most paleopathologists believe that the 200 cases science has stumbled across are just the tip of the iceberg. Every second, 4 million cells in your body are dividing -- the calculation comes from Robert Weinberg of the Whitehead Institute. Each of these events provides an opening for random mutations. Some will be repaired, some will kill the cell -- but a few will survive and be passed to the next generation. Second by second, year after year the damage accumulates. Almost 80 percent of cancer is diagnosed in people fifty-five or older. In centuries past, fewer people lived long enough to get cancer -- something else killed them first. They were probably less likely to be obese and they didn’t smoke cigarettes. There were no chemical factories or processed food. But when you adjust for these factors, you still are left with a baseline rate of cancer -- the curse of being complex creatures in a universe awash with entropy. Follow me on Twitter @byGeorgeJohnson