Update – This paper dragon is an even better illustration of the effect, and you can make your own (if you have a printer). Amaze your friends! Really, you will.

Everyone’s talking about the hollow mask illusion, a.k.a the hollow face illusion. Wired have a nice piece about this freaky visual phenomenon, complete with YouTube video so that you can see it for yourself. It’s seriously weird. Here it is on YouTube:

The illusion is a form of depth inversion. It involves a hollow (concave) object which appears to be non-hollow (convex). This happens whether the object is stationary or moving, but it’s even more striking when it’s in motion, as in the video above. When the mask of Charlie Chaplin rotates so that the inside is facing you, it suddenly appears as if it’s looking out at you – but rotating in the opposite direction. This happens even though you know what’s really going on.

The current surge of interest in the illusion was sparked by a recent fMRI study, Understanding why patients with schizophrenia do not perceive the hollow-mask illusion using dynamic causal modelling. But the fact that people with schizophrenia are generally immune to this illusion has been known for a long time. The illusion itself is even older – in one form or another, it goes back centuries.

But why exactly does it happen? That’s an important question, because if you want to understand why schizophrenics are immune to it, you really need to know why it works on “normal people”. (Notice that we normal people are the ones who are fooled while schizophrenics see reality as it is – R. D. Laing would be pleased).

Most people seem to assume that the answer is pretty simple: it’s expectation. We strongly expect things to be convex, so when we see something concave our brain tries to re-interpret it as convex. Easy! Hold on. There’s a bit more to it than that.

The intricacies of the mask illusion are discussed in a paper called The hollow-face illusion: Object-specific knowledge, general assumptions or properties of the stimulus? The authors, Hill and Johnston, start out by discussing three possible explanations for the illusion 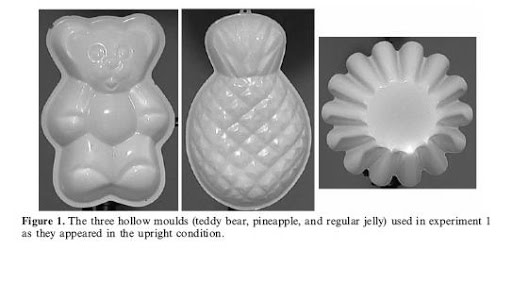 First off, it could be that the illusion is driven by object-specific knowledge, i.e. about faces. (I’ve previously discussed the theory that faces are “special” – that our brains are specialized to percieve human faces.) According to this account, our brains expect that faces are convex, not hollow and this “top-down” expectation is so strong that it over-rides the “bottom-up” data of our eyes, and we see what we expect to see. Presumably, we also have specific expectations about teddy-bears and pineapples, which is why we see the hollow jelly moulds (above) as convex…

But Hill and Johnston point out that there’s a second possibility – maybe our brains just expect everything to be convex. Rather than being about the specific object – a mask or face – the illusion might represent a more general expectation of convexity. There’s some evidence for this, because there have been reports that the illusion works even for objects which the viewer has never seen before.

A variant of this explanation claims that the illusion is about light. Maybe we expect that light always comes from above – because after all, it usually does. So we assume that the hollow mask is actually a convex face lit from above. This isn’t a very good theory, however, especially because in the video above, the light clearly comes from the side…

The final possible explanation considered by Hill & Johnston has nothing to do with expectation at all. Some people have claimed that the illusion occurs because the information reaching our eyes is ambiguous – it simply doesn’t tell us whether the object is convex or concave. However, as Hill and Johnston point out, this is only true of information reaching one eye. Because we have binocular depth perception, we should be able to tell that the mask is hollow. Also, this wouldn’t explain why the hollow mask never looks hollow. If it were ambiguous, it should be 50-50 whether it looks convex or concave.

The authors report the results of six different experiments investigating various aspects of the illusion. These are worth reading as they’re a good example of the ways in which even something as subjective as visual illusions can be scientifically studied. After considering all of the resuls Hill & Johnston conclude

In summary, the hollow-face illusion appears to reflect a combination of the explanations offered. Some ambiguously interpretable bottom-up data must be present. That, coupled with a general bias towards convexity, is sufficient to generate the illusion, even when this interpretation is incompatible with other, unambiguous, bottom-up data. However, familiar orientations and patterns of shading and surface-colour information can greatly enhance this effect for both faces and other familiar objects.

In other words, expectation drives the illusion in the context of ambigious information, and while the expectations in question don’t need to be about specific objects, like faces, it helps if they are.