The heritability of impulse control 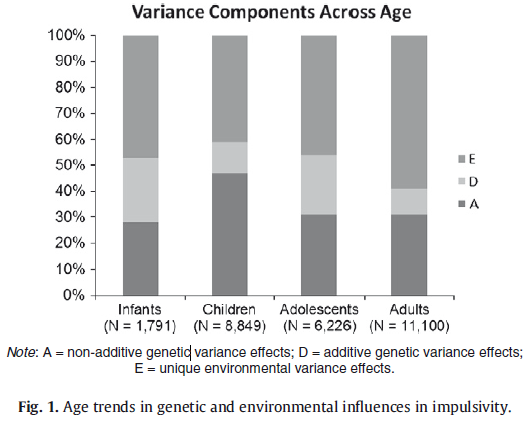 The above figure is from a paper I stumbled upon, Genetic and environmental influences on impulsivity: a meta-analysis of twin, family and adoption studies:

Shared environmental effects basically means the parents. It seems that parents have minimal impact on a child's impulsivity. This seems about right. Some parents can control their children through incentives and punitive measures, but this doesn't seem to result in a fundamental change in personal orientation. But the non-shared environment, the "unique environmental effects" in their terminology, is of some interest to me. Though that be simply be an error fact which collapses various forms of stochasticity, it may also point to cultural and subcultural norms. The incentives and punitive measures of parents are always limited to some extent. Children do spend time away from their parents at school. And, the reality is that at some point children will no longer be children, and parental influence diminishes. But cultural norms and expectations are much more difficult to evade. How many times have you known of children who refuse to eat something when urged on by their parents, but change their tune when they find out that all the kids at school like it?