The Good Old Days, When Psychologists Used to Hang Out in Toilet Stalls 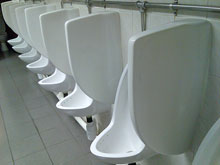 Intrepid psychologists of the less regulated past used to carry out experiments that put not only their subjects, but themselves (or at least their research assistants) in harm's way. While it was the participants who got the short end of the stick in the likes of Milgram's electric shock experiment, other experiments called for researchers to do audacious things that would probably get them arrested today. For example, one experiment [subscription required] from the 1970s called for the researcher to loiter inside a toilet stall and use a periscope to secretly watch men doing their business at the urinals. The purpose of the study was to find out what causes paruresis, or "shy bladder syndrome." The researcher used a stopwatch to measure delay time and urination time while an accomplice, another researcher, stood at an adjacent urinal or one farther away. The study concluded that invasions of personal space caused longer delay times and shorter urination times. Though a third party can sort of understand why such public voyeurism is needed to capture natural behavior, it would've been hard to explain the scientific merit to the man whose urine stream you've been staring at. Scientific American's Jesse Bering recounts this and other brave experiments, including a mock rape scene and staring at strangers for a creepily long time. Bering, for one, seems to miss the days when researchers risked their own lives and limbs for science. Related Content: 80beats: In Repeat of Milgram's Electric Shock Experiment, People Still Pull the Lever DISCOVER: The Dark Side of Reality TV