Researchers search for the brain basis of religious experiences. 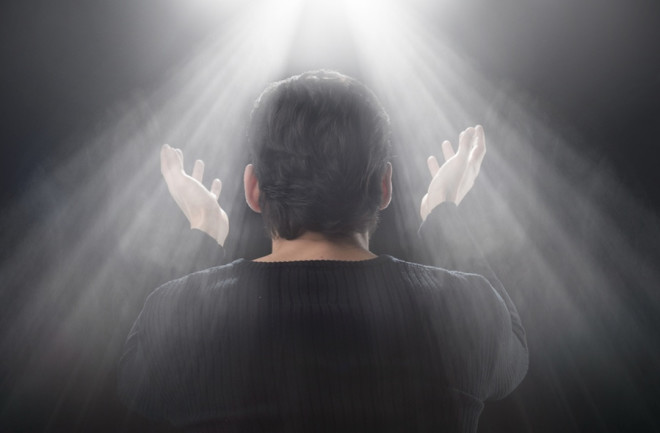 Three years ago, the British evolutionary biologist Richard Dawkins became a guinea pig in an experiment. Neuroscientist Michael Persinger claimed he had induced religious experiences in subjects by stimulating specific regions of their brains with electromagnetic pulses. Dawkins, renowned for his biological theories as well as for his criticism of religion, volunteered to test Persinger's electromagnetic device—the "God machine," as some journalists dubbed it. "I've always been curious to know what it would be like to have a mystical experience," Dawkins said shortly before the experiment. Afterward, he admitted on BBC that he was "very disappointed" that he did not experience "communion with the universe" or some other spiritual sensation.

Many researchers, like Persinger, view the brain as the key to understanding religion. Others focus on psychological, genetic, and biochemical origins. The science of religion has historical precedents, with Sigmund Freud and William James addressing the topic early in the last century. Now modern researchers are applying brain scans, genetic probes, and other potent instruments as they attempt to locate the physiological causes of religious experience, characterize its effects, perhaps replicate it, and perhaps even begin to explain its abiding influence.

The endeavor is controversial, stretching science to its limits. Religion is arguably the most complex manifestation of the most complex phenomenon known to science, the human mind. Religion's dimensions range from the intensely personal to the cultural and political. Additionally, researchers come to study religious experiences with very different motives and assumptions. Some of them hope that their studies will inform and enrich faith. Others see religion as an embarrassing relic of our past, and they want to explain it away.

"Even when the neural basis of religion has been identified, it remains a plausible interpretation of any conceivable neuropsychological facts that there is a genuine experience of God," notes Fraser Watts, a psychologist and theologian at the University of Cambridge and an Anglican vicar. A major funder of research on religion is the John Templeton Foundation, started in 1987 by the Christian financier John Templeton to promote "collaboration" between science and religion.

The theories described below illustrate the diversity of scientific approaches to understanding religion. All these theories are tentative at best, and some will almost certainly turn out to be wrong. The field suffers from vague terminology, disagreement about what exactly "religion" is, and which of its aspects are most important. Does religion consist primarily of behaviors, such as attending church or following certain moral precepts? Or does it consist of beliefs—in God or in an afterlife? Is religion best studied as a set of experiences, such as the inchoate feelings of connection to the rest of nature that can occur during prayer or meditation? Comparing studies is often an exercise in comparing apples and oranges. Nonetheless, the science merits close attention.

Stewart Guthrie, an anthropologist at Fordham University in New York, is in the explain-it-away camp of researchers. Noting the plethora of gods that populate the world's religions, many with minds and emotions similar to our own, Guthrie argues that the belief in supernatural beings is a result of an illusion that arises from our tendency to project human qualities onto the world. Religion "may be best understood as systematic anthropomorphism," he writes in his book, Faces in the Clouds.

Anthropomorphism is an adaptive trait that enhanced our ancestors' chances of survival, he adds. If a Neanderthal mistook a tree creaking outside his cave for a human assailant, he suffered no adverse consequences beyond a moment's panic. If the Neanderthal made the opposite error—mistaking an assailant for a tree—the consequences might have been dire. In other words, better safe than sorry. Over millennia, as natural selection bolstered our unconscious anthropomorphic tendencies, they reached beyond specific objects and events to encompass all of nature, goes Guthrie's theory, until we persuaded ourselves that "the entire world of our experience is merely a show staged by some master dramatist."

Humans are not alone in this trait. In The Descent of Man, Charles Darwin noted that many "higher mammals" share the human propensity "to imagine that natural objects and agencies are animated by spiritual or living essences." As an example, he recalled watching his dog growl at a parasol lifted off the ground by a gust of wind.

Andrew Newberg, a neuroscientist at the University of Pennsylvania, has focused on the tendency of people from different religious traditions to report similar mystical experiences, which typically involve sensations of self-transcendence and "oneness." These commonalities indicate that the visions stem from the same neural processes, Newberg hypothesizes. To test his theory, Newberg has scanned the brains of more than 20 adherents of spiritual practices, including Christian prayer and Tibetan Buddhist meditation. He uses a technique called single-­photon-emission-computed tomography, or SPECT, a variant of the better-known positron-emission tomography, PET.

The chief advantage of SPECT is that it can capture the brains of meditators in a relatively natural setting. The subject meditates not in the SPECT chamber itself but in a separate room. When a subject—a Franciscan nun, in one case—feels her ordinary self "dissolving into Christ consciousness," as she describes it, a radioactive fluid is injected into her body through an intravenous tube; the fluid travels to her brain and becomes trapped in nerve cells there. The nun then goes to the SPECT chamber, where a computer-controlled camera scans her brain. The resulting image reveals levels of neural activity in the moment immediately after she received the radioactive fluid, when she presumably was still immersed in contemplation.

Newberg's scans showed that neural activity decreases in a region at the top and rear of the brain called the posterior superior parietal lobe. Newberg refers to this region as the orientation-association area, because it helps us orient our bodies in relation to the external world. Patients whose posterior superior parietal lobes have been damaged often lose the ability to navigate through the world, because they have difficulty determining where their physical selves end and where the external world begins. Newberg hypothesizes that suppressed activity in this brain region (prompted by an individual's willed activity) could heighten a sense of unity with the external world, thus diminishing a person's sense of subject-object duality.

Intriguingly, Newberg has found some overlap between the neural activity of self-transcendence and of sexual pleasure. This result makes sense, Newberg says. Just as orgasms are triggered by a rhythmic activity, so religious experiences can be induced by dancing, chanting, or repeating a mantra. And both orgasms and religious experiences produce sensations of bliss, self-transcendence, and unity; that may be why mystics such as Saint Teresa so often employed romantic and even sexual language to describe their raptures.

The overlap between rapture and orgasm isn't total. The hypothalamus, which regulates both arousal and quiescence, seems to play a larger role in orgasms, while the brain's frontal lobes, the seat of higher cognitive functions, are apparently more active during spiritual practices. Nevertheless, Newberg concludes, an "evolutionary perspective suggests that the neurobiology of mystical experience arose, at least in part, from the mechanism of the sexual response."

Newberg's research can be questioned on several counts, however. One might ask what his brain scans are really measuring, since his subjects must remain self-aware enough to pull a string when they reach what is allegedly their deepest state of spirituality. Also, the SPECT method provides only a snapshot of the brain at a single moment. Studies of meditation carried out with other techniques, such as magnetic resonance imaging and electroencephalography, have revealed different patterns of neural activity—not surprisingly, since meditation is a complex behavior that evokes many different psychological states.