The Ghost of Libet Returns

The Libet experiment, once heralded as undermining the concept of free will, has now been reinterpreted in a less radical way. 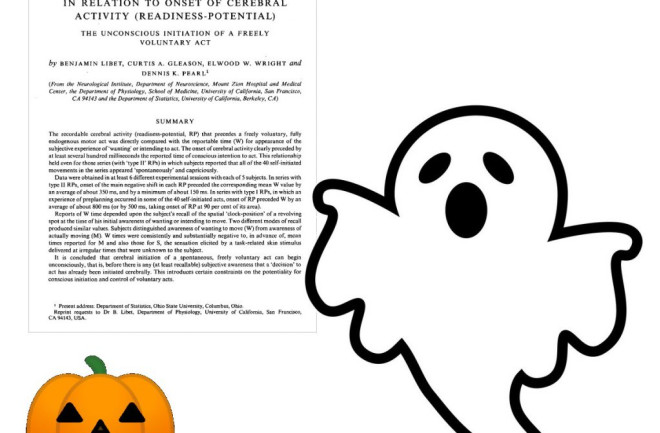 Last month, I blogged about the famous Libet experiment and how this 1983 study, which was once heralded as undermining the concept of free conscious will, has now been reinterpreted in a less radical way.

Libet et al. found an electrical potential, the Readiness Potential (RP), that emerged in the brain about 1 second before the onset of voluntary movement. The key finding was that the RP also preceded the conscious intention to move. This seemed to suggest that the brain was ‘deciding to move’ before the conscious mind.

However, recent work by neuroscientist Aaron Schurger and colleagues cast doubt on this interpretation. Schurger et al. argued that the RP is not actually a marker of a decision process in the brain, but merely reflects random brain fluctuations that might influence decisions.

But now, in an interesting twist, a new paper has appeared that casts doubt on Schurger’s theory. And – double twist – Schurger is one of the authors.

The new paper is called Do readiness potentials happen all the time? and it’s from Travers, Khalighinejad, Schurger and Haggard in Neuroimage.

Travers et al. searched through EEG data (from this paper) looking for evidence of random RP’s that don’t culminate in actions, which should be common according to Schurger’s hypothesis. In a nutshell, they didn’t find any convincing RP-like events except immediately before voluntary actions:

The conventional view of the RP is that it represents a specific, causal precursor to voluntary actions that is produced after the unconscious decision to act has been made (Kornhuber and Deecke, 1965; Libet, 1985). Our results are entirely consistent with this view.

This is an interesting set of results that help support the original interpretation of the Libet study. I’m not sure I’m fully convinced by Travers et al.’s approach though.

The authors created a RP ‘template’ by averaging over all of the real RPs (i.e. the periods leading up to voluntary actions), then searched to see if this template matched the rest of the EEG data. It’s a good idea in principle, but the problem is that the RP is quite a weak effect at the best of times. Here, we can see that the ‘similarity to RP’ index only slightly rises just before voluntary actions (blue line – note the small rise before time 0.0) – and those are the canonical RPs!

So I don’t think that this paper offers conclusive evidence against the Schurger hypothesis. Even so, it seems that the ghost of Libet et al. (1983) has returned to haunt neuroscience (and philosophy) once again. Happy Halloween!