The First Decade of the Future is Behind Us 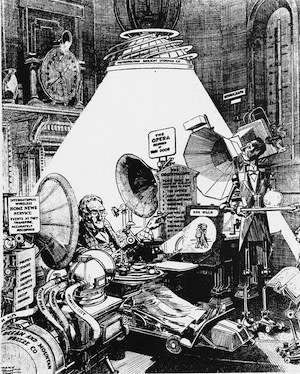 In just a few days, the first decade of the 21st Century will be over. Can we finally admit we live in the future? Sure, we won’t be celebrating New Years by flying our jetpacks through the snow or watching the countdown from our colony on Mars, and so what if I can’t teleport to work? Thanks to a combination of 3G internet, a touch-screen interface, and Wikipedia, the smartphone in my front pocket is pretty much the Hitchhiker's Guide to the Galaxy. I can communicate with anyone anywhere at anytime. I can look up any fact I want, from which puppeteers played A.L.F. to how many flavors of quark are in the Standard Model, and then use the same touch-screen device to take a picture, deposit a check, and navigate the subway system. We live in the future, ladies and gentleman. But you may still have your doubts. Allow me to put things in perspective. Imagine it’s 1995: almost no one but Gordon Gekko and Zack Morris have cellphones, pagers are the norm; dial-up modems screech and scream to connect you an internet without Google, Facebook, or YouTube; Dolly has not yet been cloned; the first Playstation is the cutting edge in gaming technology; the Human Genome Project is creeping along; Mir is still in space; MTV still plays music; Forrest Gump wins an academy award and Pixar releases their first feature film, Toy Story. Now take that mindset and pretend you’re reading the first page of a new sci-fi novel:

The year is 2010. America has been at war for the first decade of the 21st century and is recovering from the largest recession since the Great Depression. Air travel security uses full-body X-rays to detect weapons and bombs. The president, who is African-American, uses a wireless phone, which he keeps in his pocket, to communicate with his aides and cabinet members from anywhere in the world. This smart phone, called a “Blackberry,” allows him to access the world wide web at high speed, take pictures, and send emails. It’s just after Christmas. The average family’s wish-list includes smart phones like the president’s “Blackberry” as well as other items like touch-screen tablet computers, robotic vacuums, and 3-D televisions. Video games can be controlled with nothing but gestures, voice commands and body movement. In the news, a rogue Australian cyberterrorist is wanted by world’s largest governments and corporations for leaking secret information over the world wide web; spaceflight has been privatized by two major companies, Virgin Galactic and SpaceX; and TimeMagazine’s person of the year (and subject of an Oscar-worthy feature film) created a network, “Facebook,” which allows everyone (500 million people) to share their lives online.

Does that sound like the future? Granted, there’s a bit of literary flourish in some of my descriptions, but nothing I said is untrue. Yet we do not see these things incredible innovations, but just boring parts of everyday life. Louis C. K. famously lampooned this attitude with his “Everything is amazing and nobody is happy” interview with Conan O’Brian. Why can’t we see the futuristic marvels in front of our noses and in our pockets for what they really are? Jean Baudrillard, an impenetrable post-modern French philosopher who lived long enough to see his predictions in Simulacra and Simulation come true, described our current situation as hyper-reality. The present is overloaded with information and everything becomes meta-ironic-underground-mainstream-old-retro-cool faster than we can process. As all the sources of meaning get their wires crossed, the past is mined for the Next Big Thing because we know what worked once before, where as no one has any idea what the future actually holds. Patton Oswald describes the phenomenon as “Etewaf: Everything That Ever Was–Available Forever.” The past can become new because we didn’t have enough time to understand it’s value the first go around. And therein lies the the terror of the 21st century. The era in which “the future” means anything is behind us. It no longer works as a concept because that for which “the future” used to stand - a world of wonder, scientific innovation, and marvel - is here, now, all around us. Others have noted that the Singularity is “In Our Past Light-Cone” and that our current visions of the future are actually outdated in relation to current technology. But this creates something of a problem: if it’s already the future, then what comes after the future? This question is the wrong one. It’s like asking what comes after history? More history, of course. The more interesting question is this: now that the future is here, how do we survive it? Our Baudrillardian hyper-reality is one in which world-altering inventions must be instantly integrated into our lives or we begin to fall behind, to fall out of reality. If you met someone who didn’t use a cellphone or computer and had no idea what the internet was, would you say that person shared your reality? Really? In addition to the risk of being outrun by reality, the strangeness, the alienation of our daily experience of the future comes from the fact that our future is partial. Yes, we have smartphones and internet-everything, but we don’t have genetic engineering or neural-implants or human clones or surgical nano-bots or teleportation. Different areas of science enter the future at different rates. We don’t notice the current wave of innovation we’re riding, only the fields lagging behind. The future is here, but it’s incomplete. If the past decade has taught us anything, it’s that though technological progress is guaranteed, its direction is impossible to discern, pace Ray Kurzweil. A breakthrough in one technology can cause explosive progress in relation to other technologies. Because cellphones and the internet went through such exponential growth, even with huge advances it looked like genetics, biotech, neuroscience, and nanotech just plodded along. It’s no longer a question of when the future will get here but which future is next? A future of space flight and interplanetary colonization? A future of androids, cyborgs, and AI? A future of genetically enhanced and near-immortal transhumans? A future of nanotech based post-scarcity production? My argument is that while any one of these futures is a real possibility, only one will come into being at a time. If pressed to guess, the breakthroughs in genomics and genetic engineering point to the next couple decades being dominated by biotech. Just as you've managed to shake off the awe and wonderment of your smartphone, in a decade or so you'll be bored with gene therapies, $50 genomic sequencing, designer babies, and clones. Or maybe I'm completely wrong and it'll be nano-tech replicators and graphene-based space elevators that you grumble about not getting your orbiting cubical fast enough. We’re making our way through the future, one decade, one technology, at a time. Try to stay excited. Image "We'll All Be Happy Then" via the ever amazing paleofuture.com