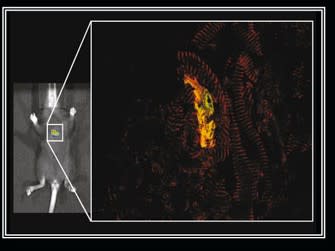 For years, researchers have been using fluorescent proteins

). The concept is fairly simple: by inserting the gene for GFP (green fluorescent protein, originally found in jellyfish) at the end of another gene—say the gene for hemoglobin—its glow can be used to measure how much hemoglobin is produced and where it is produced in the cell. Inspired by the success of GFP as a research tool (it earned its discoverers the Nobel Prize in Chemistry in 2008

), scientists have adopted a similar approach to identify and locate transplanted stem cells in animal models. Except in their case, they’ve begun to use the gene for luciferase

, the enzyme responsible for the mesmerizing glow of the firefly. And if this method works, it could make stem cells a potent tool for addressing heart disease. Bioluminescent imaging (BLI), as the method is known, uses the light emitted when luciferase catalyzes the oxidation of luciferin, a pigment (which is strong enough to be perceived even across multiple tissue layers), to track embryonic and adult stem cells in small animals. Though it lacks the spatial resolution of more advanced imaging technologies such as magnetic resonance imaging, BLI has already proven useful in observing stem cells in vivo. What might make BLI even more useful is if it could also shed light (pun intended) on the stem cells’ differentiation status—that is, whether or not they are doing their job. For instance, if a doctor wanted to use stem cells to treat a stroke patient, it would be helpful if she could monitor the cells’ progress visually and determine whether or not they were forming new neurons. Thanks to some clever engineering, a group of researchers led by Steven Ebert of the University of Central Florida have developed a mouse embryonic stem (mES) cell line that glows more brightly the faster it develops into new cardiac tissue

. This cell line could vastly improve doctors' understanding of how diseased hearts recover and how stem cells can guide the regenerative process. Eventually, it could even eliminate the need for some forms of heart surgery. They did so by tying the expression of the luciferase gene (LUC) to that of Ncx-1, a gene that encodes a protein that removes excess calcium ions from cells and is crucial for proper nerve function. Because the Ncx-1 gene is only expressed in new tissue, Ebert and his colleagues used it to quantify tissue growth. As a control, they created two other mES cell lines in which the expression of luciferase was tied to other genes. The cell lines were otherwise identical to the Ncx-1-LUC cell line. They injected both undifferentiated and differentiated versions of the cell lines into the left ventricles of several mice and measured luciferase activity (i.e., look for the pretty light) immediately. While they could see light in a few specimens, most showed little to no luciferase activity for more than a few hours at a time. Several days later, however, the light signals became stable and, in some cases, grew stronger over time—which indicated that the heart was regenerating. The mice that exhibited the strongest bioluminescence following the onset of cardiac differentiation were those that had received the Ncx-1-LUC cell line. By contrast, the mice that had received the cell lines in which luciferase was linked to another gene did not display increased bioluminescence following differentiation. In fact, some displayed less bioluminescence. Though all the usual caveats apply, the main advantage of this technique is that it could enable doctors to monitor the pace of recovery in a patient with cardiovascular disease without having to resort to surgery. After injecting the stem cells into the patient's heart, a doctor would only need a microscope outfitted with a special camera lens to assess her progress. And the same approach could be used to evaluate a slew of other stem cell-based therapies. Since luciferase does not harm the stem cells' performance or the human body, there is no reason why it couldn't be used in other organs—perhaps the gene could be tweaked further to produce a unique glow for each organ. If and when the continuing litigation over embryonic stem cell funding is resolved, researchers will have a shiny new tool to aid them in their quest to turn stem cells into healers.