The Fall of Freud

The works of Sigmund Freud were enormously influential in 20th century psychiatry, but they've now been reduced to little more than a fringe belief system. Armed with the latest version of my PubMed history script, and inspired by this classic gnxp post on the death of Marxism, postmodernism, and other stupid academic fads I decided to see how this happened. 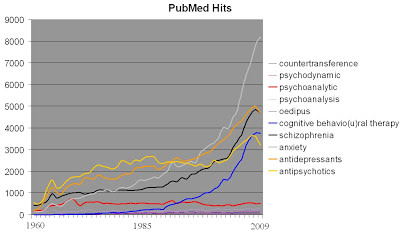 As you can see, the number of published scientific papers related to Freud-y search terms like psychoanalytic has flat-lined for the past 50 years. That represents a serious collapse of influence, given the enormous expansion in the amount of research being published over this time.

Since 1960 the number of papers on schizophrenia has risen by a factor of 10 and anxiety by a factor of 80 (sic). The peak of Freud's fame was 1968, when almost as many papers referenced psychoanalytic (721) as did schizophrenia (989), and it was more than half as popular as antidepressants (1372). Today it's just 10% of either. Proportionally speaking, psychoanalysis has gone out with a whimper, though not a bang.

The rise of Cognitive Behavioral Therapy (CBT), however, is even more dramatic. From being almost unheard until the late 80's, it overtook psychoanalytic in 1993, and it's now more popular than antipsychotics and close on the heels of antidepressants.

What's going to happen in the future? If there is to be a struggle for influence it looks set to be fought between CBT and biological psychiatry, if only because they're pretty much the only games left in town. Yet one of the reasons behind CBT's widespread appeal is that it hasn't thus far overtly challenged biology, has adopted the methods of medicine (clinical trials etc.), and has presented itself as being useful as well as medication rather than instead of it.

One of the few exceptions was Richard Bentall's book Madness Explained (2003) in which he criticized psychiatry and presented a cognitive-behavioural alternative to orthodox biological theories of schizophrenia and bipolar disorder. Bentall remains on the radical wing of the CBT community but in the coming decades this kind of thing may become more common. Only time will tell...