The Ethics of 'Mini Human Brains'

The research, involving the growth of cerebral 'organoids' from human stem cells, was

on Wednesday. For some good coverage of the science behind this work, see Ed Yong's piece here and the FAQ here. It's not hard to see why these little blobs have attracted a lot of media attention. It's a remarkable technique, although growing brain cells in culture is not new. Such 'brains in a dish' have been around for some time. What's new here is that these organoids grew in 3D, and - all by themselves - started to differentiate into rudimentary brain regions. Incredible. But is it ethical? There are, perhaps, three ways to look at this. Firstly, you might feel that such research is repellent by its very nature - that to dissect the human brain in this way is "playing God", or some such. Second, you might decide that there are no ethical concerns, because it's just a bunch of cells. You might consider the notion of worrying about the morality of neural cultures to be silly. Or - what amounts to the same thing - you might never think about the ethics at all. Now, as a neurobiologist I would love it if there were no ethical dimensions to this. It would make things a lot easier. But I'm not so sure. We are our brains. You don't need a liver, a mouth, or legs to be a human being. So if it were possible to somehow grow a complete human brain - complete with the kind of connections found in normal human brains - I think that brain would be a human being. It would be a human being in a hellish predicament. I think we ought to make sure nothing like that happens. It might seem fanciful, but every human brain started out as a single cell. We're several lightyears away from that point right now. The organoids they just made are, for one thing, really small. They reached a maximum diameter of about 4 mm. 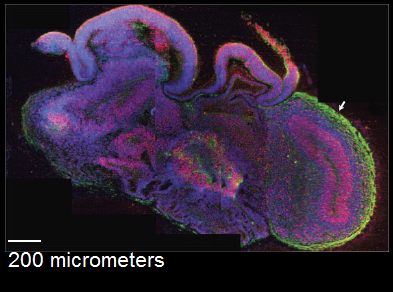 This makes them vastly smaller than the brain of a human. But, then again, 4 mm across isn't all that much smaller than the brain of a mouse. Mice are not very clever. But I consider it wrong to cause a mouse to suffer unnecessarily - or to put it another way, to cause a mouse brain to suffer. Many people agree. Find a way to grow these organoids a little bit bigger, and they'd be the size of a mouse brain. But by itself, this wouldn't mean much. Human spinal ganglia are in the same ballpark size as 4mm organoids, and mouse brains. Yet we each have dozens of these little bunches of nerve cells, in our backs. They are not known for their intelligence, or capacity to feel pain. The difference between ganglia and mice is the organization of the neurons. This, rather than size, is what really matters. So I'd say it would only be unethical to create a culture with sufficiently developed connections that it crossed some threshold of complexity. If you oppose animal experimentation as a whole, you would probably set that threshold pretty low. But even if you accept doing things to animals, you wouldn't want to do the same things to humans. There has to be a threshold somewhere. As to how close we are to reaching it, or how we would possibly know if we'd crossed it, that's where we bump up against the hardest problems in neuroscience. My gut feeling is that a neuronal culture wouldn't develop 'sufficient connections' in the absence of any sensory input. But we really don't know, nor do we know what sufficient connections look like. So the funny thing is, doing this kind of research is probably the only way we'll ever work out whether it's ethical or not.