The Elegant Way to Save Earth From Asteroid Destruction

The one fact in Deep Impact that we can all agree on is that we should not allow the Earth to get hit by a large meteor. Depending on its size, it could potentially destroy anything from a city to the entire planet. And nations it doesn't destroy outright would still have to deal with big atmospheric and weather problems caused by dust and debris. General badness all around. Where common sense and the film divide is just how best to dodge an oncoming meteor. I wrote a while back on the idea of painting one side of the asteroid black while beaming heat onto it, causing the asteroid to shift course. It's a neat idea, but not nearly as neat as the gravity tractor, not just because this approach is more elegant, but because there's a British company called EADS Astrium that announced last week that they could actually build one if it were needed. 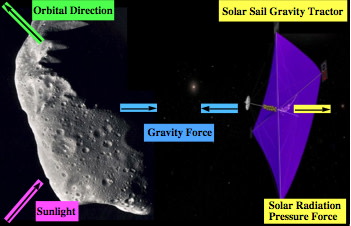 The idea for the tug first proposed by NASA scientists Edward Lu and Stanley Love in a paper in Nature in 2005. The pair realized that sure, we could change an asteroid's course by docking a rocket onto the asteroid and pushing it, but landing on an asteroid is really hard: The asteroid is an extremely fast-moving target, and often it rotates asymmetrically around its axis, meaning that a lumpy part of the asteroid could smash a relatively teeny rocket in its rotational path. But, the scientists argued, the spaceship could hover 200 meters or more above the asteroid and use their mutual gravitational attraction to form a "towline" between the two. Then ship could use its own propulsion to slowly pull the asteroid to another course. It would have to push very gently to avoid breaking the bond and flying away, but over the course of 15 to 20 years, the asteroid could be persuaded to miss our planet. The idea of a gravity tractor has been refined (PDF) by scientist Bong Wie, working at Arizona State University, who proposed the use of solar sails to eliminate the problem of fuel capacity on the satellite. (Love and Lu's proposal relied on nuclear energy generators for power in their design.) Solar sails capture the momentum from photons of solar radiation to provide propulsion. By properly angling the sail (Wie proposes 35 degrees), the body of the space ship can be moved in the desired direction. The sail can take months to build up significant velocity, but since it has a long time to accomplish its tugboat-like task, this isn't inherently a showstopper. That said, solar sail technology is still in its infancy—it's only been tested on a very small scale by American and Japanese scientists in space—so it's not ready for large-scale deployment just yet. EADS Astrium's design uses four ion thrusters of the sort used on Deep Space 1. Each is aligned to keep the device hovering above the asteroid while gently pulling the asteroid via it's gravitation "towline" off course. The ship will be 30 meters (about 98 feet) across and weigh about 10 tons. In news articles, Astrium representatives say they haven't even built a prototype yet, but they're convinced they can bang one out if necessary. All of which puts us back to the question of whether there's enough capacity to provide the necessary early warning to build and launch a gravity tractor in time to have it work. Since NASA currently tracks about 6,000 asteroids, of the 100,000 out there, I'm going to go with no.