The Colorful Case of the Philosophical Zombie?

The philosophical zombie, or p-zombie, is a hypothetical creature which is indistinguishable from a normal human, except that it has no conscious experience. Whether a p-zombie could exist, and whether it even makes sense to ask that question, are popular dinner-table topics of conversation amongst philosophers of mind. A new case report from Swiss neurologists Antonio Carota and Pasquale Calabrese will give them something to chew over: The Achromatic ‘Philosophical Zombie' The 'zombie' is a 48 year old man who suffered a brain haemorrhage leading to damage to the occipitotemporal cortex. He survived, but reported that he could no longer see colors: his vision was entirely colourless, though otherwise normal. This is known as cerebral achromatopsia. Remarkably, however, he was able to name colours. Shown hundreds of circles in 12 basic colors, the patient correctly named most of them (NB - the graph and colors are mine): 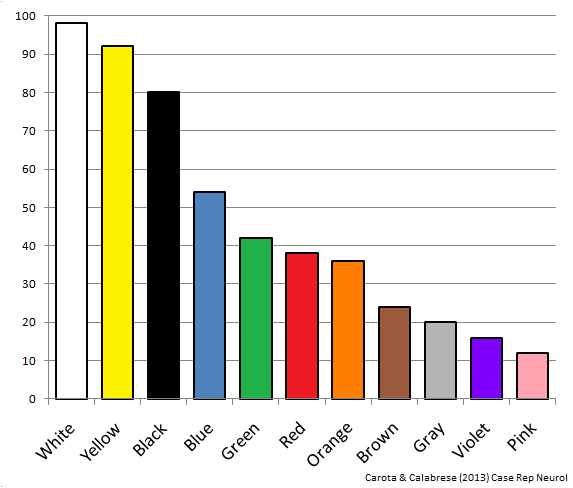 Given that random picks would get you just 9% correct, this is most impressive performance for a man who 'can't see colors.' So is this patient really a chromozombie, behaving as if he can see colours but having no conscious experience of them? My first reaction is: he doesn't always behave as though he can see colours - his verbal behaviour (self-report) is that he doesn't. Whether that makes him less of a zombie is one for philosophers to ponder. But he still makes for an interesting case, although as the authors point out, it is not entirely new : the principle of perception-without-reported-awareness is called blindsight and is quite well studied. This seems to be one of the most dramatic cases of pure color blindsight on record, though.