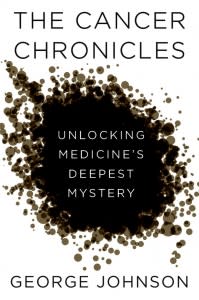 Years ago one of my colleagues described the approach of publication day as "the calm before the calm." And that is usually how it goes. Your long work done, you wait in quiet anticipation for the official date, knowing all the while that it is an artificial concoction. Unless there has been a horrible mistake, the book has been available in stores for at least a couple of weeks, and there is no law preventing them from displaying and selling it. In fact that is what you hope they do. (Amazon and Barnes & Noble respect the tradition by only taking preorders). More important, the publications that review books -- and there still are many -- tacitly agree not to publish until on or after the pub date. Sometimes they jump the gun, but usually not by much. This has been and remains an honorable profession. Anyway, today, August 27, 2013, is when The Cancer Chronicles finally is released. I began writing it three years ago. On Saturday I learned, after hearing by email from a cancer survivor, that the book had just been reviewed in the Wall Street Journal along with Clifton Leaf's much-anticipated, The Truth in Small Doses. And yesterday afternoon, a message on Twitter brought news that there is a review today in the New York Times science section, "Cancer's Ordered Disorder." Three more just popped up in the New York Journal of Books and on the web sites for the Atlantic and NPR. I'm not reading them right away, waiting for there to be a Bell Curve of opinion. You can only hope that the tail extends to the right, positive side. In the UK an adaptation of parts of the book is running today in the Daily Mail, aiming for a very different audience from the one I usually imagine I'm writing for. A great opportunity, the London publisher tells me. An excerpt will appear tomorrow on Slate, and a conversation I just finished recording with Michio Kaku will air Saturday on Science Fantastic, his show on the Talk Radio Network. So it hasn't been so calm as I remember from before. Very encouraging after working so hard on such a deeply personal book, the hardest I have written. But I have learned, as authors do, never to get my hopes too high off the ground. It is better to be surprised. updated, August 29, 2013: An essay on the origin of the book is now online at Bloomberg View. August 31, 2013: A piece I wrote for the Wall Street Journal was published today: 5 Books About Living with Cancer and Other Chronic Diseases. (The online version is for subscribers only, alas.) September 1: Reviewed today in the New York Post and in the Boston Globe. @byGeorgeJohnson Related story: The Long Shadow: Cancer Has Afflicted People Since Prehistoric Times For a preview of The Cancer Chronicles, including the table of contents and index, please see the book's website.