The Brain: What Happens to a Linebacker's Neurons?

A blow to the head can change the neural architecture of the brain from elastic to brittle, with devastating consequences. 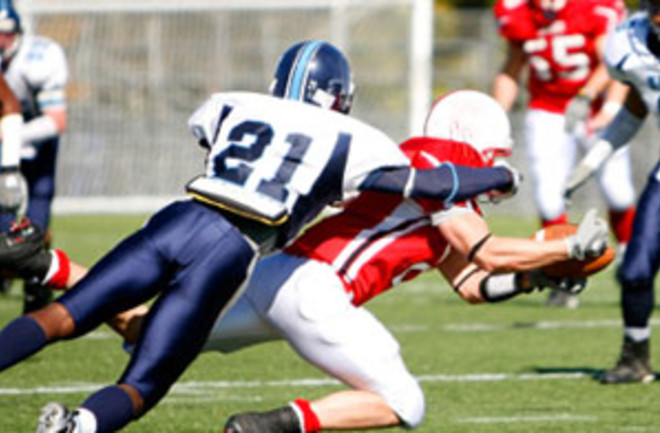 Every spring the National Football League conducts that most cherished of American rituals, the college draft. A couple of months before the event, prospective players show off their abilities in an athletic audition known as the combine. Last winter’s combine was different from that of previous years, though. Along with the traditional 40-yard dashes and bench presses, the latest crop of aspirants also had to log time in front of a computer, trying to solve a series of brainteasers. In one test, Xs and Os were sprinkled across the computer screen as the athletes took a test that measured how well they could remember the position of each letter. In another, words like red and blue appeared on the screen in different colors. The football players had to press a key as quickly as possible if the word matched its color.

These teasers are not intended to help coaches make their draft picks. They are for the benefit of the players themselves—or, to be more precise, for the benefit of the players’ gray matter. Under pressure from Congress, the N.F.L. is taking steps to do a better job of protecting its players from brain damage. The little computer challenges that the draft candidates had to solve measure some of the brain’s most crucial functions, such as its ability to hold several pieces of information at once. Given the nature of football, it is extremely likely that a number of this year’s draft picks will someday suffer a head injury on the field. After that happens, N.F.L. doctors will give them the same tests again. By comparing the new results with the baseline scores recorded just before the draft, the doctors will get a clearer sense of how badly the football players have damaged their brains and what degree of caution to take during recovery.

The N.F.L.’s sudden interest in neuroscience is just the latest sign that we, as a society, are finally taking brain injuries more seriously. It’s about time. Neurologists estimate that every year more than a million people suffer brain injuries in the United States alone—not just from football mishaps, but also from car crashes, falls down stairs, and many other kinds of accidents. And that figure is probably a serious underestimate, because many brain injuries go undiagnosed. It is easy to believe that if you feel fine after a fall, then you must truly be fine, but even so-called mild brain injuries can have devastating consequences. People’s personalities may shift so they can no longer hold down their job or maintain their marriage. Sometimes “mild” brain injuries even lead to dementia.

This hidden epidemic of brain injury is not only tragic but also strange and mysterious. Brains don’t fail in obvious ways, as bones do when they snap or skin does when it rips. Scientists are only now starting to discover the subtle damage that occurs when the brain is injured: It gets disturbed down to its individual molecules.

The brain floats in a sealed chamber of ce­re­brospinal fluid, like a sponge in a jar of water. If you quickly sit down in a chair, you accelerate your brain. The force you generate can cause it to swirl around and shift its shape inside the braincase. The brain is constantly twisting, stretching, and squashing within your head. Given the delicacy of the organ—a living brain has the consistency of custard—it is amazing that we manage to get to the end of each day without suffering severe damage.

Douglas Smith, director of the Center for Brain Injury and Repair at the University of Pennsylvania, has been running experiments for the past decade to understand how we are able to survive such regular assaults. Smith builds miniature brains by growing live rat neurons on a stretchable membrane attached to a custom-built metal plate. Roughly the size of a postage stamp, the plate is lined with microscopic grooves crossing a flexible strip of silicone that runs across the middle. As the neurons grow on each side, they sprout long branches, called axons, which creep down the grooves to make contact with neurons growing on the other side in order to transmit electric signals between them.

It turns out that axons are remarkably elastic. They can stretch out slowly to twice their ordinary length and then pull back again without any harm. Axons are stretchy due in part to their flexible internal skeleton. Instead of rigid bones, axons are built around structural elements, mostly bundles of filaments called microtubules. When an axon stretches, these microtubules can slide past one another. If the movement is gradual, the microtubules will immediately slide back into place after the stretching stops, with no harm done.

If Smith delivers a quick, sharp puff of air, however, something else entirely happens. Instead of recoiling smoothly, the axon develops kinks. Over the next 40 minutes, the axon gradually returns to its regular shape, but after an hour a series of swellings appears. Each swelling may be up to 50 times as wide as the normal diameter of the axon. Eventually the axon falls apart.

These kinks form, Smith believes, when microtubules are stretched so rapidly that they snap. The broken filaments can no longer slide neatly back over one another and instead bunch up, causing the kinks. Normally, enzymes inside neurons are constantly taking apart microtubules and building new ones with the recycled parts. But now the enzymes attack the broken ends of the microtubules, causing the internal structure of the axon to dissolve. With the microtubules turning to mush, the axon begins to relax and lose its kinks. The axons look fairly normal, but they are catastrophically damaged.

Microtubules do more than give neurons their structure. They also serve as a kind of cellular railway network. Proteins travel from one end of a neuron to the other by moving along microtubules. If microtubules break, the result is much like what happens when a railroad track is damaged. The proteins pile up, and these traffic jams produce the swellings in the axons that Smith sees in his experiments. The swellings get so big that they eventually rupture, tearing the axon apart and spewing out damaged proteins.

Smith’s findings could shed light on a common but puzzling brain trauma known as diffuse axonal injury. This happens when people experience sudden accelerations to the brain—from a bomb’s shock waves, for example, or from whiplash in a car crash. Very often the acceleration causes people to lose consciousness. In serious cases it can lead to trouble with cognitive tasks, such as deciding whether the word red is actually printed in red. When pathologists perform autopsies on people with diffuse axonal injury, they see severed axons with swollen tips, just like what Smith sees in his experiments.

Smith’s research also suggests that even mild shocks to the brain can cause serious harm. If he hit his axons with gentle puffs of air, they didn’t swell and break. Nevertheless, there was a major change in their molecular structure. Axons create the electric current that allows them to send signals by drawing in positively charged sodium ions*. A moderate stretch to an axon, Smith recently found, causes the sodium channels to malfunction. In order to keep the current flowing, the traumatized axons start to build more channels.

Smith suspects that such a mended axon may be able to go on working, but only in a very frail state. Another stretch—even a moderate one—can cause the axon to go haywire. Its additional sodium channels now malfunction, and the axon tries to compensate by creating even more channels. But these channels are now so defective that they start letting in positively charged calcium ions. The calcium atoms activate enzymes that destroy the gates that slow the flow of sodium through the channels, so now even more sodium rushes in—and then more calcium, in a runaway feedback loop. The axon dies like a shorted-out circuit.

This slower type of axon death may happen when someone suffers mild but repeated brain injuries, exactly the kind that football players experience as they crash into each other in game after game. Cognitive tests like the ones at this year’s N.F.L. combine can pinpoint the mental troubles that come with dysfunctional or dying axons. There is precious little research to indicate how long a football player should be sidelined in order to let his brain recover, though, and Smith’s experiments don’t offer much comfort. Preliminary brain studies show that axons are still vulnerable even months after an initial stretch.

Once a person does sustain a brain injury, there is not a lot doctors can do. They can open a hole in the skull if pressure in the brain gets too high. But they have no drugs to treat the actual damage. Some 30 compounds have made it into phase 3 trials in humans, only to fail.

The latest research could point scientists to more effective treatments. Smith, for example, recently found that the anticancer drug taxol can stabilize the microtubules in neurons, protecting them from catastrophic disassembly after a sharp shock. Now that we know the damage to the brain happens at the molecular level, we may find a cure for the injured brain waiting there as well.