Stop Paying Attention: Zoning Out Is a Crucial Mental State

Researchers say a wandering mind may be important to setting goals, making discoveries and living a balanced life. 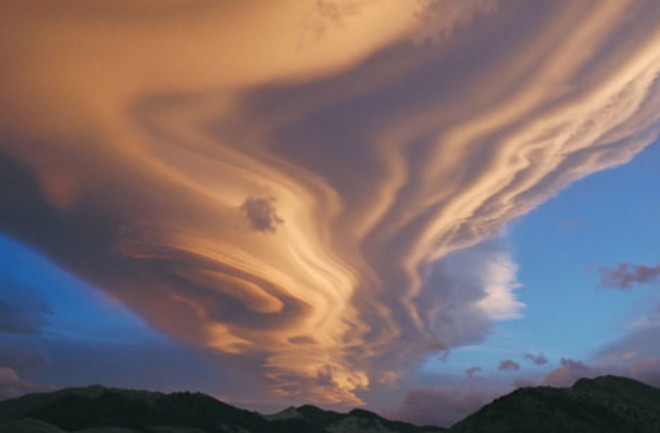 A lenticular cloud over the Tararua Mountains in the North Island of New Zealand. (Credit: NASA)

I am going to do my best to hold your attention until the very last word of this column. Actually, I know it’s futile. Along the way, your mind will wander off, then return, then drift away again. But I can console myself with some recent research on the subject of mind wandering. Mind wandering is not necessarily the sign of a boring column. It’s just one of the things that make us human.

Everybody knows what it is like for our minds to wander, and yet, for a long time psychologists shied away from examining the experience. It seemed too elusive and subjective to study scientifically. Only in the past decade have they even measured just how common mind wandering is. The answer is very.

Some of the most striking evidence comes from Jonathan Schooler, a psychologist at the University of California at Santa Barbara who is one of the leading researchers on mind wandering. In 2005 he and his colleagues told a group of undergraduates to read the opening chapters of War and Peace on a computer monitor and then to tap a key whenever they realized they were not thinking about what they were reading. On average, the students reported that their minds wandered 5.4 times in a 45-minute session. Other researchers have gotten similar results with simpler tasks, such as pronouncing words or pressing a button in response to seeing particular letters and numbers. Depending on the experiment, people spend up to half their time not thinking about the task at hand—even when they’ve been told explicitly to pay attention.

Psychologists have also discovered ways to increase and decrease mind wandering. Jonathan Smallwood, a colleague of Schooler’s at UC Santa Barbara, instructed subjects to tap a key every time they saw a new number appear on a computer screen but to hold off tapping if the number was three. The more quickly the numbers came, the less often the subjects’ minds wandered. But as people practiced the task and became more familiar with it, their mind wandering increased. Smallwood has also found that mood affects mind wandering: If he showed people a short video about a sick dog before they performed the task, for example, they spent more time mind wandering than did a separate group that had watched a comedy clip.

Alcohol tweaks mind wandering in a particularly interesting way, as Schooler and his colleagues report in a new paper entitled “Lost in the Sauce,” published in Psychological Science. The psychologists ran the War and Peace experiment again, but this time after serving their subjects some vodka with cranberry juice. Drunk readers actually reported less mind wandering than sober people did. That does not mean that you should swill vodka if you want a laser focus on Tolstoy’s deathless prose, though. Schooler has shown that there are, in fact, two kinds of mind wandering: mind wandering when you are aware that you’re thinking about something else and mind wandering without awareness. He calls this second kind “zoning out.”

To determine which kind of mind wandering people experience, Schooler and his collaborators told the participants in the War and Peace experiment to report their own drifting but also asked them every few minutes if they were thinking of something else. If people responded to those questions with a yes, that meant they weren’t aware enough of their own minds to report their mind wandering on their own. These experiments show that we spend about 13 percent of our time zoning out. But when we are drunk, that figure doubles. In other words, inebriated subjects report less mind wandering only because they are less aware of their own minds.

When our minds wander, we lose touch with the outside world. We don’t actually black out, of course, but we are more likely to make mistakes, fail to encode memories, or miss a connection. Zoning out makes us particularly prone to these errors. Schooler and Smallwood, along with Merrill McSpadden of the University of British Columbia, tested the effect of zoning out by having a test group read a Sherlock Holmes mystery in which a villain used a pseudonym. As people were reading the passages discussing this fact, the researchers checked their state of attentiveness. Just 30 percent of the people who were zoning out at the key moments could give the villain’s pseudonym, while 61 percent of the people who weren’t zoning out at those moments succeeded.

These results are shocking when you stop to think about them. Each of us has a magnificent hive of billions of neurons in our head, joined to each other by trillions of connections. The human brain is arguably the most complex organ in the natural world. And yet studies on mind wandering are showing that we find it difficult to stay focused for more than a few minutes on even the easiest tasks, despite the fact that we make mistakes whenever we drift away.

Neuroscientists are investigating this paradox by searching for the signatures of mind wandering in the brain. To that end, Schooler and Smallwood recently ran yet another experiment (pdf)—this one in collaboration with Alan Gordon of Stanford University, University of British Columbia neuroscientist Kalina Christoff, and Christoff’s graduate student Rachelle Smith. The researchers put people in a functional magnetic resonance imaging (fMRI) scanner and gave them the standard press-a-key-unless-you-see-three test. From time to time they asked the subjects if they were paying attention to the task; if they hadn’t been, the researchers asked if they had been aware that their mind had wandered. The subjects reported mind wandering 43 percent of the time they were asked. In nearly half those cases, they said they hadn’t been aware of their inattentiveness until the scientists asked.

Later, the scientists pored over the scans, looking closely at the activity in people’s brains right before they were asked about their state of mind. Overall, people who said they were mind wandering had a pattern of brain activity quite different from those who were focused on the task.

The regions of the brain that become active during mind wandering belong to two important networks. One is known as the executive control system. Located mainly in the front of the brain, these regions exert a top-down influence on our conscious and unconscious thought, directing the brain’s activity toward important goals. The other regions belong to another network called the default network. In 2001 a group led by neuroscientist Marcus Raichle at Washington University discovered that this network was more active when people were simply sitting idly in a brain scanner than when they were asked to perform a particular task. The default network also becomes active during certain kinds of self-referential thinking, such as reflecting on personal experiences or picturing yourself in the future.

The fact that both of these important brain networks become active together suggests that mind wandering is not useless mental static. Instead, Schooler proposes, mind wandering allows us to work through some important thinking. Our brains process information to reach goals, but some of those goals are immediate while others are distant. Somehow we have evolved a way to switch between handling the here and now and contemplating long-term objectives. It may be no coincidence that most of the thoughts that people have during mind wandering have to do with the future.

Even more telling is the discovery that zoning out may be the most fruitful type of mind wandering. In their fMRI study, Schooler and his colleagues found that the default network and executive control systems are even more active during zoning out than they are during the less extreme mind wandering with awareness. When we are no longer even aware that our minds are wandering, we may be able to think most deeply about the big picture.

Because a fair amount of mind wandering happens without our ever noticing, the solutions it lets us reach may come as a surprise. There are many stories in the history of science of great discoveries occurring to people out of the blue. The French mathematician Henri Poincaré once wrote about how he struggled for two weeks with a difficult mathematical proof. He set it aside to take a bus to a geology conference, and the moment he stepped on the bus, the solution came to him. It is possible that mind wandering led him to the solution. John Kounios of Drexel University and his colleagues have done brain scans that capture the moment when people have a sudden insight that lets them solve a word puzzle. Many of the regions that become active during those creative flashes belong to the default network and the executive control system as well.

Of course, being permanently zoned out has its downside. It is one thing to drift away for a few lines of War and Peace. But if you’re pondering where you’ll be in five years as you drive through a busy intersection, you may not be around in five years to find out. Our brains delicately navigate between near-term and long-term thinking, monitoring our own awareness to make sure that we are not missing something vital. Perhaps, Schooler and Smallwood argue, the secret to a good life is finding the balance between the two, the rhythm that brings harmony to the different timescales at which we live.

And if you are staring at that last sentence and wondering what on earth I’m talking about, you might want to scan back a few paragraphs to find the spot where you zoned out. Honestly, I won’t mind.