The Brain: An Electric Cure for the Mind

Why does shock therapy beat back depression? New experiments show how such a blunt  treatment can have such positive effects. 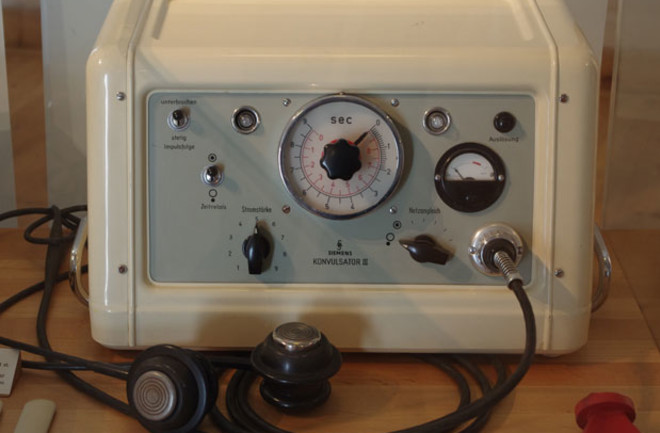 Ian Reid, a psychiatrist at the Royal Cornhill Hospital in the Scottish city of Aberdeen, has treated people with severe depression for 25 years. “It’s a very nasty illness, depression,” he says. “I have worked with people who have cancer and depression, and more than one of them has said, ‘If I had to choose one of those two diseases, I’d go for the cancer.’ ”

When patients come to Royal Cornhill with major depression, they’re first treated with psychotherapy and antidepressants. Only about 40 percent respond to their first medication. Sometimes a different one will do the trick, but in Reid’s experience, about 10 to 20 percent of depressed people respond to no drug at all. In those cases, Reid regularly shifts to a third option. It’s officially called electroconvulsive therapy, or ECT—better known by its unofficial name, shock therapy.

Reid is an expert on ECT, and over the years he has received plenty of grief for it. “There are people on the Internet who describe me as a Nazi, as a barbarian,” he says. “And there’s one person who suggested I should get ECT so I know what I’m doing.”

Reid is not surprised by the reactions. For many people, the sum of their knowledge about ECT comes from the 1975 movie One Flew Over the Cuckoo’s Nest. Jack Nicholson plays Randle McMurphy, a criminal hoping to escape hard labor by spending his term in a mental institution. But McMurphy gets more than he bargained for, including a harrowing session of ECT. The hospital staff straps him down, puts a piece of rubber in his mouth so he won’t bite off his own tongue, and delivers a blast of electricity to his temples. He writhes in agony and then slumps back, his body limp.

That scene bears no resemblance to what Reid does for his patients. For one thing, he gives them anesthesia and muscle relaxants so they don’t experience any flailing. But most crucially, ECT works. “You can watch someone going from being unresponsive and soiling themselves to being completely transformed,” Reid says.

In Scotland, a country of 5 million, 400 people receive the treatment each year. And for about 75 percent of them, it brings relief. “ECT outperforms psychotherapeutic treatments and antidepressant drugs,” Reid notes. Yet its effectiveness is a mystery. “It doesn’t sound intuitive at all,” he admits. “Making someone have a seizure, giving them an electric shock, and making something as complex as depression better just seems crazy.”

Fortunately, we don’t have to understand why a treatment works before using it. “Captain Cook was handing out limes to his crew for scurvy before anyone knew what vitamin C is,” Reid says. But since ECT is so invasive, and since its effects can fade, he has long wanted to figure out how shock therapy works, in the hopes of tapping the same mechanism to find a longer-lasting, less arduous means of beating back depression. “Always in the back of my mind has been the thought that it would be awfully nice to know what was going on here,” he says.

Doctors in Italy first used electroconvulsive therapy in 1938 to treat schizophrenia; in the decades that followed, the treatment spread to other countries and other disorders, especially depression. Although ECT was clearly effective, it could be a frightening experience. Patients remained conscious until their seizures made them black out. Sometimes they broke bones during the process. In the 1960s, psychiatrists added anesthesia and muscle relaxants to ECT to eliminate some of this trauma, but memory loss was still a common complaint. Amnesia became less of a problem in the 1980s, when pulses were reduced to brief, sharp stimulations.

By the 21st century, the negatives surrounding ECT had been mitigated to a large degree. In a 2010 study, Maria Semkovska and Declan M. McLoughlin of Trinity College in Dublin reviewed 84 studies of 2,981 patients who received ECT. The only significant memory troubles they found occurred within three days after treatment; by 15 days, the patients’ memories actually improved.

With safety questions put to rest, Reid and his colleagues have been trying to find out how ECT works. Beginning in 2009, they used functional magnetic resonance imaging (fMRI) to scan the brains of patients prior to treatment for depression; they then followed the patients through the course of therapy, generally for four weeks. Successfully treated patients, nine in all, returned for follow-up scans. Reid knew from previous studies that depression reduces the size of certain brain regions, including the hippocampus and gray matter, both generally implicated in emotion. After ECT, Reid’s team measured the volume of each subject’s brain. The researchers found an increase in hippocampus size but not in gray matter.

They also investigated a second, potentially more significant change: how ECT altered the brain’s ability to talk to itself. Each region of the brain specializes in certain mental tasks. The hippocampus, for example, helps us encode and retrieve memories. If we try to recall a memory while lying in an fMRI scanner, the machine can detect extra activity occurring in the hippocampus.

If brain regions are like self-contained computers, then the brain as a whole is a computer network. The activity in one region is influenced by neurons sending signals from other regions. This communication can lead two regions to work together closely. When one region is active, so is the other; when one is quiet, the other tends to be as well.

An effort to establish the relationship between this interconnectivity and neuropsychiatric disease was already under way. Researchers found that some disorders, including schizophrenia and Alzheimer’s disease, appear to alter the connectivity of certain networks. In 2010 University of Aberdeen neuroscientist Christian Schwarzbauer measured brain connectivity in people who have lost consciousness. He found that the connectivity of people in permanently vegetative states turns out to be different from that of people who eventually regain awareness.

In 2011 Schwarzbauer teamed up with Reid on a new ECT study. His job was to analyze the brain scans for changes in connectivity. It would be the first time anyone looked for such a link and also the first time Schwarzbauer used a new method he had devised for measuring connectivity. Typically neuroscientists select a few large regions of the brain to study before they start their experiment. They then compare the activity in these regions by measuring the flow of blood into them. Schwarzbauer came up with a way to conduct a much more fine-grained survey. Instead of picking out regions in advance, he divided the entire brain into 25,000 chunks. He then measured the links among all of them, looking for significant changes before and after ECT.

This approach revealed much more than Reid’s study of brain size. “The communication structure of the brain dramatically changed after treatment,” Schwarzbauer says. ECT weakened the same connective network in all nine patients—a network that surrounds a single hub located above the left eye, in a brain region called the left dorsolateral prefrontal cortex.

Reid and his colleagues didn’t know it at the time, but in St. Louis another team was also studying the connectivity of depression. Yvette Sheline and her colleagues at Washington University scanned the brains of 18 people with major depression and compared them with the brains of 17 healthy individuals. They found evidence that in depressed people, the network centered on the left dorsolateral prefrontal cortex was “hyperconnected.”

When Reid and Schwarzbauer found out about Sheline’s research, it got them thinking about how ECT rewires the brain. When people are depressed, they speculated, these hyperconnected regions might bounce thoughts back and forth around the brain. “This could cause an internal information overflow,” Schwarzbauer says, making it hard to process external information. By getting rid of those hyperconnections, ECT might let depressed people get out of their own head.

Reid is testing this hypothesis by following his patients and waiting to see if they relapse. If he and Schwarzbauer are right, a relapse ought to include the detectable return of hyperconnectivity in the depression network.

Reid’s study leaves unanswered the question of how a jolt of electricity gets rid of hyperconnections. But he hopes that brain scans and other sophisticated methods will eventually reveal how ECT works. From there, it might be possible to come up with a less invasive way to get the same effect.

“If you could put it in a bottle,” Reid says, “that would be great.”

Carl Zimmer is an award-winning biology writer and author of The Tangled Bank: An Introduction to Evolution.