The Avengers Help You Understand Your Fears About Transhumanism 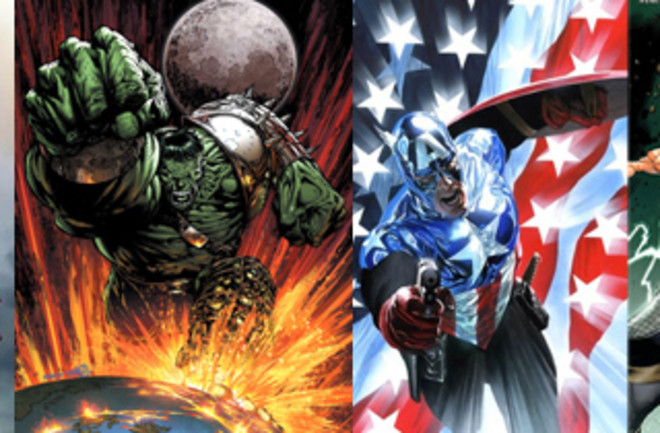 Transhumanism is a big, complicated, sprawling idea. The central concept – that humans can be made better with technology – touches on a lot of hopes and fears about the future of humanity. Though I'm always going on about how great human enhancement could be, I've got my fair share of fears myself. But my fears are probably way different than many of your fears. But how in the world can we represent those concerns? As it turns out, I've found a pretty good set of archetypes that represent our hopes and fears: Marvel Comic's Avengers.

How we frame scientific progress changes how we see individual technologies. When we think about science changing people, our minds naturally go to that group of individuals constantly being bombarded by gamma radiation, genetic mutagens, cybernetic interventions, and biological acceleration. I'm talking, of course, about superheroes. Superheroes are modern mythology. And because of that, they make great metaphors for understanding big issues. With The Avengers movie officially announced, I can't help but notice that the four main members* of Earth's Mightiest Heroes – Thor, the Hulk, Captain America, and Iron Man – are great examples of the different ways different people understand (or misunderstand) enhancement. Respectively, they are The God, The Monster, The Soldier, and The Robot.

Now, in the case of the Avengers, I don't mean that they each represent a kind of enhancement, like cognitive enhancing pharmaceuticals or genetic engineering for athleticism. I am talking about the mindset people have around enhancement. Will transhumanism make people into monsters or Gods? Is science on the right track or out of control? The Avengers represent how you think enhancement works. Not only that, each Avenger symbolizes the hopes, fears, and problems enhancement may have. Whatever your dreams or nightmares about enhancement are, at least one member of Marvel's wonder team has got you covered. So which Avenger represents you?

The Hulk represents The Monster. The Hulk is a man, Bruce Banner, who becomes enhanced by a massive blast of gamma radiation. But his enhancement is beyond his control. Rage, a state we associate with a loss of control, brings out the monstrous Hyde to Banner's human Jekyll. The Hulk is what we think about when we worry that human enhancement will result in unpredictable and overwhelming changes in a person.

The Fears: The Hulk (as generally portrayed) is far less intelligent than Banner. He is pure, furious id smashing his way through any obstacle. One fear the Hulk embodies is the idea that enhancement could change our basic biological limits such that our humanity falls by the wayside, leaving only a creature of incredible but inhumane power. Unlike the other Avengers, the Hulk becomes inhuman when enhanced.

Views Science as Out of Control: Banner's transformation into the Hulk is the result of an accident. Instead of enhancement occurring because of a deliberate plan, the Hulk is a result of super-science playing with fire. The Monster sees science as just too many accidents waiting to happen. Enhancement will have a lot of unintended consequences, one of which may be the loss of humanity itself.

The Hopes: The Hulk is still Bruce Banner. The good and kindness in Banner manifest in the Hulk's fight against evil and enemies of those he loves. Banner is also constantly searching for a cure, at least a way to control, his Hulk side. Even if science reaches too far, good scientists will fix their errors.

Bottom Line: The Hulk, The Monster, represents science out of control. The fear is that our pursuit of enhancement will make monsters of us whether we like it or not. The hope is that if we start down that path, human nature and science will help us return to our better angels. The Monster is torn between caution and arrogance.

Thor represents The God. Thor is godlike. He possesses superhuman powers like near immortality, incredible strength, and endurance, but is not omniscient or infallible. Moreover, he is not human. Thor is an Asguardian, a humanlike race distinct from human beings in terms of biological superiority and magical ability. The God is what we think of when we think of enhancement making a superhuman race. The God is the opposite of the Monster.

The Fears: Thor is an Aryan wet dream. Blue eyes, blond hair, perfect physical attributes, cunning intelligence, and a member of a superior race. In this aspect, he represents the fear of eugenics being used to create racial purity or under the auspices of "improving the species" by eliminating "undesirable" racial attributes. Also, he's cast down to Earth due to his arrogance. Time among the pleebs will straighten him out. Not the best perspective of normal humans.

Views Science as Techno-Magic: Thor represents the misconception that enhancement is closer to a magical cure-all than a scientific pursuit. Science fantasy like a pill that will let you live forever (i.e. the golden apples of Idunn) comes to mind. Forget actual genetics and biology, for those who view transhumanism through the lens of The God, science may as well be magic.

The Hopes: Thor sees himself as protector. The difference in race is not a reason to subjugate humans but instead creates a duty to defend them. Asguard and its ruler, Odin, hold Asguardians to higher standards of ethics and morality because of their superior abilities. In this aspect, The God represents the hopes surrounding moral enhancement.

Iron Man represents The Robot. Tony Stark is an alcoholic genius playboy who saves his own life by installing a reactor into his chest that also happens to power a mechanized exoskeletal war-suit. He represents external enhancement through prosthetic and computer augmentation. Without the suit, Stark is just a very flawed human being.

The Fears: Tony Stark is the most frighteningly human of all the Avengers. He is a drunk, a jerk, a slut, and astoundingly arrogant. Though he invents the suit, he is also utterly dependent upon the arc-reactor that powers it to keep himself alive. Alternatively, when he is in the Iron Man suit, he's trying to be clean and be a good guy. And that's when Stark seems the least like himself. The suit that makes him a hero also flattens his personality.

The other fear is related to how the Robot reflects science as a pursuit of the wealthy individual. Tony Stark doesn't build a fleet of suits for the elderly or disabled. Nope, just one really amazing suit for himself - a sovereign entity by virtue of his riches and knowledge.

Views Science as Gizmos and Gadgets: Stark is a tycoon. The Robot represents science as a product of the individualist. Transhumanism will be a capitalist pursuit in which we mechanically upgrade ourselves like computers and cars.

The Hopes: Stark, the living embodiment of the military-industrial complex, rejects warmongering for peacemaking. Furthermore, his invention saves his life and enables him to move beyond his personal demons. In the films, the Iron Man suit is the result of a near-death experience and an exposure to the emptiness of his vice-riddled life. His personality isn't flattened, it's elevated. Thus, the Robot represents the hope that only the negative aspects of our personalities will be brought under control.

Bottom Line: Iron Man, the Robot, represents the view that transhumanism will trade biology for engineering. The fear is that our human qualities will be repressed for the sake of the "good" of society, resulting in bland automatons. The hope is that enhancement will not quell the human spirit but create a sense of duty to a higher calling. The Robot is torn between personal desires and societal needs.

Captain America represents The Soldier. Captain America, taken purely as an example of enhancement, represents the ideal. He is slightly better than the best human in any category: strength, smarts, endurance, and health. The result of a one-off experiment (as is his shield), Captain America takes his sworn duty to protect the Constitution against enemies foreign and domestic seriously.

The Fears: Captain America is a hyper-nationalist soldier. His name is Captain America for chrissake. Forget the latent fears of racism you associate with Thor; Captain America only loves you if you love America. Furthermore, he's a product of a military experiment. By nature and design, he's a warrior and sees violence as a solution.

Views Science as a branch of the Military: Captain America is government property. The Soldier represents the view that scientific progress is something that happens behind closed doors and in secret. Or at least at the whim of our elected officials. The benefits are used to keep citizens "safe," but not to better the citizens themselves.

The Hope: Captain America is a perfect human. Not superhuman, but a Homo sapiens sapiens with all his stats maxed out. He isn't tortured by a sordid past, he doesn't really have vices, and is a good guy through and through. He represents what enhancement could really be and what it might look like, instead of the caricature of enhancement portrayed by the other Avenger archetypes. He isn't American only, so much as he is a defender of our dearest values: liberty, truth, and justice.

Bottom Line: Captain America, The Soldier, represents what transhumanism might really look like. Stronger, healthier, and slower-aging, he is a human with almost no biological flaws. The fear is that enhancement will be used generate jingoistic military zealots at the bidding of the State. The hope is that enhancement will improve human health and quality of life. The Soldier is torn between America and the ideals for which America stands.

There you have it: The Monster, The God, The Robot, and The Soldier each represent the fears, hopes, and views of science associated with transhumanism and human enhancement. One archetype alone may not capture your thoughts. Just as the Avengers are a team that "fights enemies no one hero can face," these different ideas can be mixed and matched. You may fear the God and hope for the Soldier but worry The Monster is reflective of how science might actually be.

The key is that enhancement isn't itself scary, but the way we think science and society work color our views of progress. Of course, this list isn't exhaustive, but it gives as a good start. My comics knowledge is limited, so feel free to suggest some others. So the next time you think about genetic engineering or augmented reality goggles and feel a twinge of concern, ask yourself which of the Avengers is framing your thoughts.

*Comic geeks: I apologize for treating the films as canon here. For folks like me still newer to comics, the films have provided a great gateway to enjoying comics. Feel free to correct/clarify my summaries of the heroes in the comments.