We've learned this week that computers can play Go. But at least there's one human activity they will never master: neuroscience. A computer will never be a neuroscientist. Except... hang on. A new paper just out in Neuroimage describes something called The Automatic Neuroscientist. Oh. So what is this new neuro-robot? According to its inventors, Romy Lorenz and colleagues of Imperial College London, it's a framework for using "real-time fMRI in combination with modern machine-learning techniques to automatically design the optimal experiment to evoke a desired target brain state." It works like this. You put someone in an MRI scanner and start an fMRI sequence to record their brain activity. The Automatic Neuroscientist (TAN) shows them a series of different stimuli (e.g. images or sounds) and measures the neural responses. It then learns which stimuli activate different parts of the brain, and works out the best stimuli in order to elicit a particular target pattern of brain activity (which is specified at the outset.) This is not an entirely new idea as Lorenz et al. acknowledge, but they say that theirs is the first general framework. 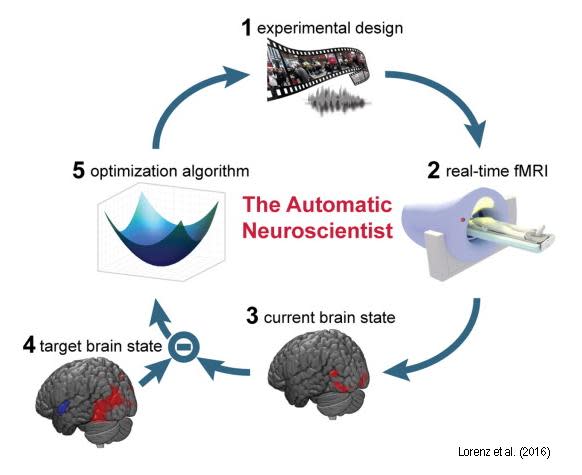 Lorenz et al. conducted a proof-of-concept study in which they asked TAN to maximize the difference in brain activity between the lateral occipital cortex (LOC) and superior temporal cortex, by presenting visual and auditory stimuli of varying levels of complexity. They show that TAN successfully learned to do this, converging to a solution in under 10 minutes in most cases. TAN learned to increase the complexity of the visual stimuli while turning off the auditory stimuli entirely. This makes sense, because LOC is a visual area, while superior temporal lobe encodes sounds. Complex images and no sounds will maximize the difference between those regions. So the answer was obvious to a human neuroscientist - but the point is that TAN worked the solution out on its own. Why would you want to find stimuli that activate a particular brain region? Lorenz et al. say that TAN has many potential uses. Researchers could use it to find the optimal stimuli as part of a pilot study, in order to maximize statistical power. Or, when it comes to clinical treatments for neurological disorders, TAN could help to optimize interventions, such as cognitive training tasks, or even brain stimulation parameters - there's no reason that TAN needs to be limited to controlling visual and auditory stimuli. I would say however that much will depend on how many variables TAN is asked to optimize simultaneously - in other words, how many dimensions the "experiment space" has. In the proof-of-concept study, there were just two dimensions. I feel that if TAN is going to be able to find new solutions, ones that human neuroscientists don't already know, it would need to be applied to much larger experimental spaces. It's not clear how well it would perform in that case. The authors conclude that

With the work we present here, we aim to stimulate the field, to explore the wide range of novel applications involving closed-loop real-time fMRI. We envision that the framework explained here, will be added to the standard toolkit of modern functional imaging.