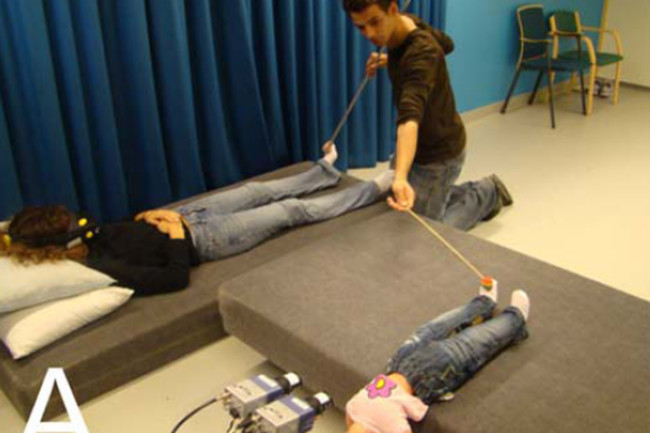 In Alice’s Adventures in Wonderland, the titular heroine quaffs a potion that shrinks her down to the size of a doll, and eats a cake that makes her grow to gigantic proportions. Such magic doesn’t exist outside of Lewis Carroll’s imagination, but there are certainly ways of making people think that they have changed in size. There’s nowhere in the world that’s better at creating such illusions than the lab of Henrik Ehrsson in Sweden’s Karolinska Institute. In a typical experiment, a volunteer is being stroked while wearing a virtual reality headset. She’s lyng down and looking at her feet, but she doesn’t see them. Instead, the headset shows her the legs of a mannequin lying next to her. As she watches, Bjorn van der Hoort, one of Ehrsson’s former interns,uses two rods to stroke her leg, and the leg of the mannequin, at the same time. This simple trick creates an overwhelming feeling that the mannequin’s legs are her own. If the legs belong to a Barbie, she feels like she’s the size of a doll. If the legs are huge, she feels like a 13-foot giant. Van der Hoort performed this illusion on almost 200 people. Questionnaires revealed that they did indeed think of the mannequins as their own body parts. Familiar objects didn’t break the spell. When van der Hoort threatened the mannequins’ legs with a knife, the volunteers’ skin broke into a worried sweat, as if their real bodies were in danger. If he touched the doll’s legs with a pencil or his finger, the recruits thought they were being prodded by giant objects. Rather than feeling like dolls in a normal world, they felt like normal people in a giant world. Ehrsson’s group have spent the last several years developing several similar illusions, all using headsets and synchronous stroking. They have convinced people that they’re having out-of-body experiences, fooled people into thinking that they have swapped bodies with a person of the opposite gender or a mannequin, and convinced people that they have three arms. The illusions are amusing, but this is serious work – each one reveals something new about our sense of self, and how we know that we own our bodies. Fooling people into thinking that they’re dolls or giants was just the start. The team used the illusion to show that our size affects the way we see other objects. Life doesn’t come with scale bars for us to measure size against. Instead, we work out the size of objects with the help of cues in the environment, like how far away they are or what’s around them. The height of a tree is easier to judge when there’s a person next to it. But these cues aren’t everything – we also judge the size of objects according to how big wefeel. Van der Hoort demonstrated this by showing the recruits a series of cubes, held at a constant distance from the cameras. If they were in the doll’s body, they thought that the cubes were larger and further away than when they were “placed” in a normal-sized mannequin. In the body of a giant, they thought objects were closer and smaller. When they were asked to stand and walk (eyes closed) to where they thought the objects were , they covered more ground if they were under the doll illusion than if they were under the giant one. Even though the volunteers were seeing exactly the same things at the same distances under the same lighting, their own perceived proportions changed their judgments of size. “The sense of one’s own body affects how we visually experience the world,” says van der Hoort. You might think that they just used the size of their own ‘legs’ to measure everything else against, but that’s not entirely the case. They needed to feel like they owned the doll or giant legs for the illusion to work. If van der Hoort broke the spell by stroking the subject and their mannequins out of time, the effect vanished. For the illusion to work, the brain must combine the information it gets from vision, touch and other senses to create a mental depiction of the body. Based on this study, it seems that this depiction then interacts with the visual signals we get about the world around us. Van der Hoort didn’t look at which parts of the brain are responsible, but he thinks that the posterior parietal cortex might be involved. This region sits towards the back of the brain and it’s sometimes disrupted by epileptic fits or migraines. When that happens, people sometimes experience “Alice in Wonderland syndrome”, where they feel like they’re growing or shrinking in size, with the world around them getting smaller or bigger accordingly. It’s possible that people will fall for the illusion no matter what size the mannequins are, as long as their body parts are all in the right proportions. That could have important technological implications. Van der Hoort says, “The present results provide the proof of concept that this could work with very small or very large humanoid robots. A surgeon could experience a full-body illusion of ‘‘being’’ a microrobot performing surgery inside the patient’s body or an engineer could perceive ownership of a gigantic humanoid robot repairing deep-sea oil-drilling devices.” This, after all, is surely the ultimate goal of science - working towards a glorious future when people can drive giant robot suits... Reference: