The ABCs of Alphabet-Magnet Synesthesia 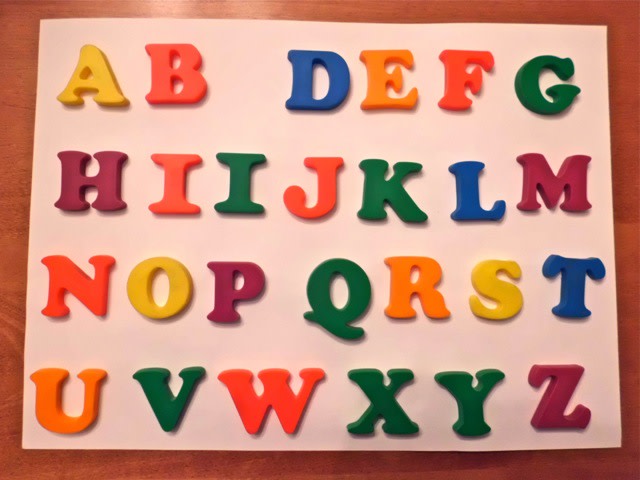 Is it cool or existentially disturbing to think that your personal brain quirks might come from the toys you played with as a toddler? In a study published earlier this month, psychologists asked 6,588 American synesthetes what colors they associate with each letter of the alphabet. Then they compared these associations to a certain vintage set of Fisher-Price alphabet magnets. They found that at least 6% of their synesthetes had improbably close matches to the colors of the magnets. The researchers defined a statistically unlikely match as anyone with more than 10 letters corresponding to the colors of the toy. At least one person had a 26-for-26 correlation, though. For people born between 1970 and 1985, around when the magnet set was manufactured, more like 15% of synesthetes were Fisher-Price matches. You can see the whole study for free online, or read more about it at Discover's D-Brief blog. The psychologists—Nathan Witthoft, Jonathan Winawer, and David Eagleman—stress that no one's synesthesia (as far as they know) is caused by a toy. Rather, people who are already prone to associating letters with colors may learn those associations from something in their environment. Longtime Inkfish readers will not be surprised that I gasped in excitement when I saw this paper, because I wrote about a preliminary version of the study (with only 11 subjects) back in January 2013. I was also excited to realize that I'm part of the new data set, since I completed a survey at www.synesthete.org a shortly afterward. I am not a Fisher Price six-percenter. But my own internal alphabet does seem like an uncanny match to an old set of Playskool magnets, which my mom kindly dug up and photographed a couple years ago (above). Maybe I'll see these in the next study? Read more Inkfish on synesthesia:You Might Have Outgrown Synesthesia as a KidMan Develops Synesthesia after Stroke, Finds James Bond Theme "Orgasmic"Even People Without Synesthesia Find Colors in MusicI'm a Synesthete. Is Something Wrong with Me? 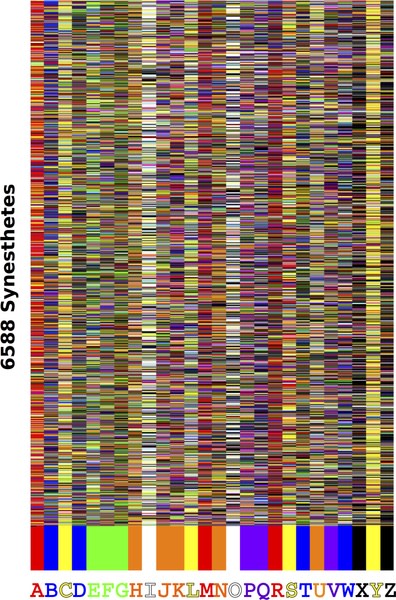 The complete sample of synesthetes from the new study, with average colors for each letter on the bottom. Images: top by Nancy Preston; bottom, Witthoft et al.