The 9 Circles of Scientific Hell 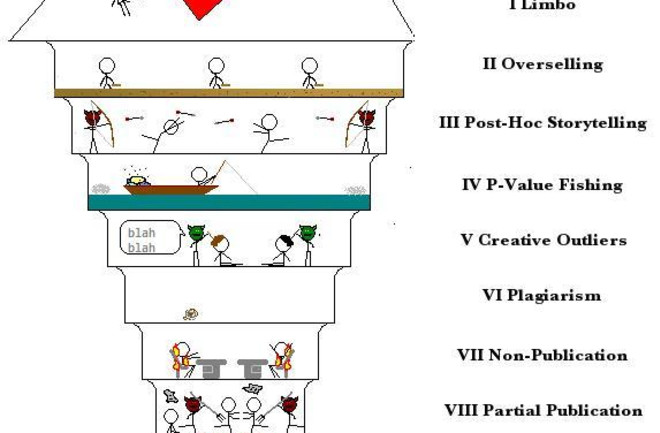 Dante’s Inferno: a classic of world literature, the definitive statement of the mediaeval Christian world-view, the first major work in the Italian language, and the basis for a violent videogame. The poem offers a tour through the nine increasingly horrible levels of Hell, in which sinners are tormented forever.

Dante’s Inferno: a classic of world literature, the definitive statement of the mediaeval Christian world-view, the first major work in the Italian language, and the basis for a violent videogame. The poem offers a tour through the nine increasingly horrible levels of Hell, in which sinners are tormented forever.

But Dante lived before the era of modern science. I thought I’d update his scheme to explain what happens to those guilty of various scientific sins, ranging from the commonplace to the shocking.

Bear in mind that Dante’s Hell had a place for everyone, and it was only Christ’s intervention that saved anyone from it; even “good” people went to Hell because everyone sins. But they are still sins. Likewise, very few scientists (and I’m certainly not one of them) would be able to avoid being condemned to some level of this Inferno… but, that’s no excuse.

First Circle: Limbo“The uppermost circle is not a place of punishment, so much as regret. Those who have committed no scientific sins as such, but who turned a blind eye to it, and encouraged it by their awarding of grants and publications, spend eternity on top of this barren mountain, watching the carnage below and reflecting on how they are partially responsible…”Second Circle: Overselling “This circle is reserved for those who exaggerated the importantance of their work in order to get grants or write better papers. Sinners are trapped in a huge pit, neck-deep in horrible sludge. Each sinner is provided with the single rung of a ladder, labelled ‘The Way Out – Scientists Crack Problem of Second Circle of Hell”Third Circle: Post-Hoc Storytelling “Sinners condemned to this circle must constantly dodge the attacks of demons armed with bows and arrows, firing more or less at random. Every time someone is hit in some part of their body, the demon proceeds to explain at enormous length how they were aiming for that exact spot all along.”

Fourth Circle: P-Value Fishing“Those who tried every statistical test in the book until they got a p value less than 0.05 find themselves here, an enormous lake of murky water. Sinners sit on boats and must fish for their food. Fortunately, they have a huge selection of different fishing rods and nets (brandnames include Bayes, Student, Spearman and many more). Unfortunately, only one in 20 fish are edible, so they are constantly hungry.”

Fifth Circle: Creative Use of Outliers “Those who ‘cleaned up’ their results by excluding inconvenient data-points are condemned here. Demons pluck out their hairs one by one, every time explaining that they are better off without that hair because there was something wrong with it.”

Sixth Circle: Plagiarism“This circle is entirely empty because as soon as a sinner arrives, a winged demon carries them to another circle and forces them to suffer the punishment meted out to the people there. After their 3 year “post” is up, they are carried to another circle, and so on…”

Seventh Circle: Non-Publication of Data “Here sinners are chained to burning chairs in front of desks covered with broken typewriters. Only if they can write an article describing their predicament, will they be set free. Each desk has a file-drawer stuffed full of these, but the drawers are locked.

Eighth Circle: Partial Publication of Data “At any one time exactly half of the sinners here are chased around by demons prodding them with spears. The demons choose who to chase at random after ensuring that the groups are matched for age, gender, height and weight. Howling desert winds blow a constant torrent of articles announcing the success of a new program to enhance participation in physical exercise – but with no mention of the side effects.”

Ninth Circle: Inventing Data “Here Satan himself lies trapped forever in a block of solid ice alongside the worst sinners of all. Frozen in front of their eyes is a paper explaining very convincingly that water cannot freeze in the environmental conditions of this part of Hell. Unfortunately, the data were made up.”

Links: This has been kindly translated into Russian here and into Portuguese here.