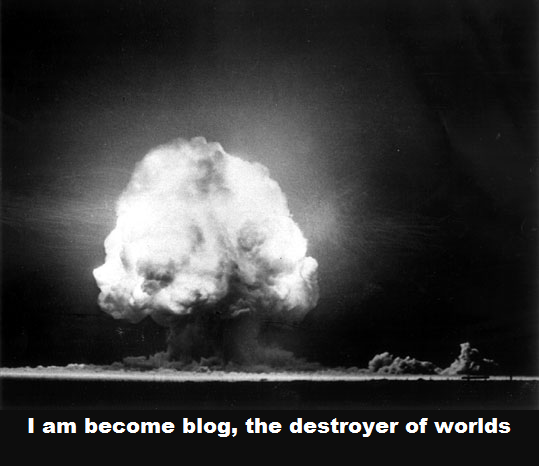 A draft article due to appear in APS Observer caused widespread outrage this week. Susan Fiske, the former president of the Association for Psychological Science (APS), writes that bloggers and other online critics of psychology papers are running wild:

New media (e.g., blogs, twitter, Facebook posts) are encouraging uncurated, unfiltered trash-talk. In the most extreme examples, online vigilantes are attacking individuals, their research programs, and their careers. Self-appointed data police are volunteering critiques of such personal ferocity and relentless frequency that they resemble a denial-of-service attack that crashes a website by sheer volume of traffic.

Fiske goes on to call critics "bullies", "destructo-critics" and, most notoriously, practioners of "methodological terrorism." She says that these offenders "destroy lives" because they "attack the person, not just the work" and that "our colleagues at all career stages are leaving the field because of the sheer adversarial viciousness." Now, many people have responded to Fiske's piece already (see Andrew Gelman, Sam Schwarzkopf, and many more.) Many people are unhappy at the use of language such as 'terrorism' to describe people who are just posting their thoughts about papers online. However, I want to take a different tack. Let's suppose that Fiske is right and that some individuals, while pretending to be discussing science, are actually engaged in the targeted personal harassment of particular scientists. If that's the case, what should we do? In my view, we should name names (or pseudonyms!): we should hold the offenders accountable with reference to specific examples of their attacks. After all, these people (Fiske says) are vicious bullies who are behaving in seriously unethical ways. If so, they deserve to be exposed. Yet Fiske doesn't do this. She says, "I am not naming names because ad hominem smear tactics are already damaging our field." But it's not an ad hominem smear to point to a case of bullying or harassment and say 'this is wrong'. On the contrary, that would be standing up for decency. If terrorists really are among us, we need to know who they are. Another reason why I think Fiske (and anyone else in a similar position) should name names is that it helps to draw boundaries. Fiske acknowledges that not all bloggers are bad: "Not all self-appointed critics behave unethically." So who are the ethical ones? It would help to know some examples of the 'good' critics because we could then know where Fiske draws the boundary seperating good criticism from bad. As it stands, Fiske's denouncations can easily be read as aimed at the vast majority of those who debate science online. In summary, I want to know who Fiske is calling a "destructo-critic" so I can judge the accuracy of the label. Am I one?