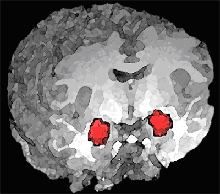 Large amygdalas, it seems, are social amygdalas. These paired regions, typically referred to as almond-shaped (indeed their name comes from the Greek for almond), are known to be part of the brain responsible for sociability as well as fear and other deep-seated emotions. Lisa Feldman Barrett and colleagues sought to find out whether size matters in the amygdala, and according to their study in Nature Neuroscience, there is a connection between people having big amygdalas and having big, complex social networks.

The researchers measured two social network factors in 58 adults. First, they calculated the size of a participant’s network, which is simply the total number of people that are in regular contact with the participant. Second, they measured the network's complexity, based on how many different groups a participant’s contacts can be divided into. ... Linear regression revealed a positive correlation in amygdala size with both social network size and complexity. [Ars Technica]

The team's MRI scans found a wide variation in amygdala size, from about 2.5 cubic millimeters to more than five. But other factors like a person's happiness didn't match up with amygdala size. And the subjects' hippocampus

, which the scientists used as a control, showed no variation when compared to a person's social network. Only the amygdala size showed the connection, Barrett says. The amygdala is shared across many species, and the finding by Barrett's team would fit with what scientists know about the brain region's purpose in some of our primate relatives.

The findings correspond to previous research that found that primates also have a larger amygdala, relative to the overall size of their brain and body. Like humans, primates live in fairly complex social groups, suggesting that a larger amygdala has evolved to help navigate these landscapes. The amygdala has also been shown to be involved with fear, emotion and even seizures, said Paul Sanberg, director of the University of South Florida Center of Excellence for Aging and Brain Repair in Tampa. Sanberg was not involved with the new study. "It's part of the 'old' section of the brain," he explained. [U.S. News & World Report]

"People who have large amygdalas may have the raw material needed to maintain larger and more complex social networks," said Barrett. "That said, the brain is a use it or lose it organ. It may be that when people interact more their amygdalas get larger. That would be my guess." [The Guardian]

DISCOVER: Conquering Your Fears, One Synapse at a Time

DISCOVER: Emotions and the Brain: Fear