Studying the Birth of a New Language

While working in schools in northern Australia, Carmel O’Shannessy realized the children there had invented an entirely new language. 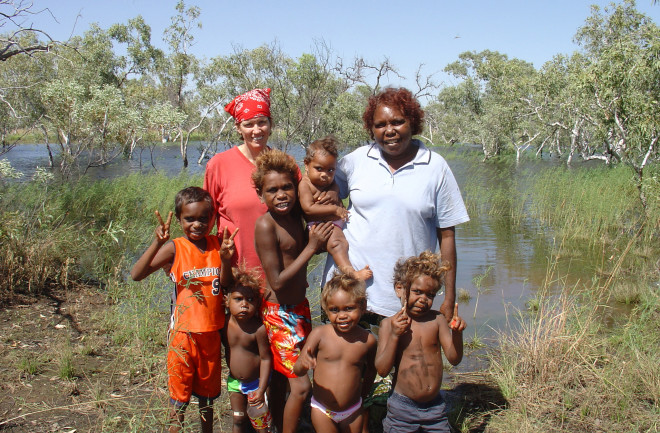 The indigenous village of Lajamanu, population 600, sits on the southern edge of the subtropics of northern Australia. It’s the kind of place where a truck rumbles in once a week to deliver staples to the local store, and where electricity comes from diesel and solar generators. It’s so remote that the oldest members of the community still remember the first time they saw a white person in the 1930s.

Carmel O’Shannessy landed on Lajamanu’s dirt airstrip in 1998 as a government employee sent to support local teachers of English and Warlpiri, a language spoken in several places in the Northern Territory. By 2001, she realized that the children had been busy inventing an entirely new mixed language, borrowing words and grammar from both mother tongues. O’Shannessy, now a linguist at the University of Michigan, describes how she got the chance to witness a language — which she later dubbed Light Warlpiri — in the making.

To learn Warlpiri, I was mostly spending time with older women. On the weekends, a group of us would go out to the bush, hunting for goanna, which is a kind of lizard. The women walked for hours, and then we would sit in the shade and boil a pot of tea and chat. I would be listening avidly and making notes, asking, “How do you say this?” and “How do you say that?”

But back at the school, I kept hearing younger students switch between English and Warlpiri, something linguists call code-switching. I didn’t pay too much attention to it because I was still trying to learn Warlpiri. Then one day, I saw a group of children around 6 or 7 years old playing with each other in the dirt, and I decided to listen to them carefully. I realized that every single sentence had both English and Warlpiri in it. I was intrigued because while it’s common for bilinguals to switch between languages, it’s not usually in this pattern.

The next year, I came back as a researcher and started recording the children and looking at their transcripts. I realized that all but eight of their verbs came from English, while their noun structure mostly came from Warlpiri. It is a very unusual way to combine languages. The best source of data is often just listening to people talk spontaneously, but to know more about their grammar, I needed to elicit particular linguistic structures, such as how the language indicates who is performing an action or when the action took place.

I made a picture book, called The Monster Story, about a dog that gets locked up by a monster and then gets rescued by its mother. I photographed toys and then changed their facial expressions using Photoshop so that the children could create the story in their own words. It worked! When I listened to children describe what they saw, I learned that they could put nouns anywhere in the sentence and were using different endings to say whether a particular noun is the subject or the object.

Although Light Warlpiri uses elements from English and Warlpiri, it would not be intelligible to speakers of just one parent tongue. It’s truly a new language.