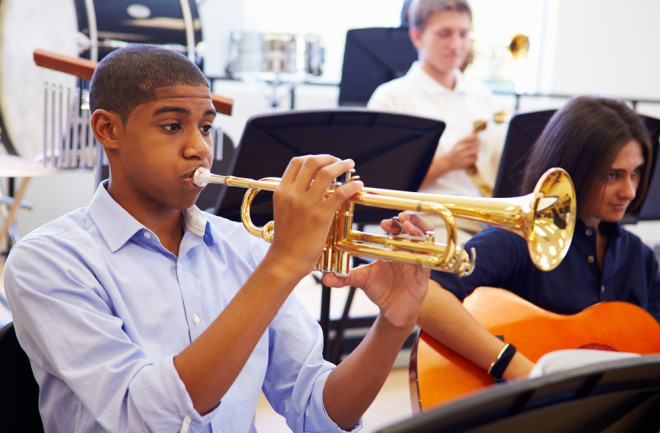 Music is the language of feelings, the food of the soul. But could it also be a grade booster for high school students? Researchers think so — if students engage in actually playing the music (not just listening to it).

A new study published in the Journal of Educational Psychology reports high school students who play musical instruments score significantly higher in science, math and English exams than their non-musical peers. The authors looked at the academic performance and music engagement (the number of music courses taken) of over 110,000 Canadian students, making the study the largest of its kind.

Something to Sing About

Peter Gouzouasis, professor of music education at the University of British Columbia and senior author of the study, has been studying the effects of music education on academic achievement for over two decades. He found that highly engaged music students, those that had taken three or four music classes during high school, were one year ahead in their English, science, and math skills compared to peers who had not taken any music classes.

Other studies have previously reported that better students are more inclined to take music lessons, so they are more likely to outperform their peers regardless of music participation. But Gouzouasis argues his team’s findings suggest “a music phenomenon” — that there is something special about music itself that benefits students.

In Gouzouasis’ study, the differences in exam grades between music and non-music students were consistent regardless of prior academic achievement on similar exams in seventh grade. Other factors, such as gender, ethnicity, and socioeconomic status, or a family’s income level, didn’t make a difference either.

That music lessons seem to help academic performance overall wasn’t the only thing Gouzouasis and colleagues uncovered. They also saw a predictive relationship between high music grades and high mathematics achievement — meaning students who received high grades in their music lessons tended to also do better in math.

High-scoring math students, however, did not necessarily perform better in music lessons, suggesting that music was doing something unique to help their achievement.

Music students engage in a variety of learning processes that may aid their school performance. They learn to read music notation, develop eye-hand-mind coordination, improve their listening skills and develop team skills and the discipline to practice. “It is likely that some skills learned in band, orchestra, and conservatory music lessons transfer very broadly to adolescents’ learning in school,” Gouzouasis says.

How music learning transfers into better grades is something researchers continue to investigate. Though he didn’t explore them in this study, Gouzouasis has a few theories. Changes in the structure and function of the auditory cortex and Heschl’s Gyrus (a part of the brain that contains the primary auditory cortex) could translate to other tasks, he thinks. In addition, the ability to “audiate,” or imagine music without hearing it, could confer cognitive benefits.

Gouzouasis and colleagues also looked at the effect of instrumental and vocal music engagement independently, as students in these forms of music have different learning processes. Vocal students do not learn how to play an instrument or how to read musical notation, for example. Both vocal and instrumental performers outperformed their non-musical peers, they found.

However, among those who were engaged in music, students who took instrumental music scored even higher than those involved in vocal studies. The authors think the higher demands of instrumental music education leads to greater cognitive development in these students.

Though the study was done using data from Canadian students, the authors anticipate the results would be consistent elsewhere. “The patterns of our findings quite clearly indicate that music participation – especially in instrumental music, and multiple years of music engagement over time – confers cognitive benefits in the form of tangible differences in many aspects of academic achievement and engagement in school,” Gouzouasis says.

So, if you’re looking to give your kids a boost academically, perhaps it’s time to face the music. The authors also hope their findings will encourage school administrators to support more music education in the classroom.