It's a good time to be a stem cell researcher. Legal and political wrangling aside, the discoveries are starting to come thick and fast now and new breakthroughs seem constantly around the corner. Last November, I was writing about two groups of scientists who had managed to turn adult human cells into embryonic stem cells for the first time. Now, after less than a year, John Dimos and Kit Rodolfa from the Harvard Stem Cell Institute have given us two more surpassed milestones for the price of one.

As before, they have transformed adult skin cells have been into embryonic stem cells but this time, there are two important differences. Firstly, the cells that came not from a young, healthy individual, but from an 82-year old woman with amyotrophic lateral sclerosis (ALS), the same condition that has paralysed Stephen Hawking. Even after a lifetime of chronic disease, the adult cells could still be reverted to a stem-like state.

It's more of an expansion on a theme than an isolated breakthrough but it's nonetheless important. Many of the diseases behind the stem cell hype are chronic conditions that affect the elderly - Alzheimer's, Parkinson's and the like. The ultimate goal of this research is to use the cells of patients with these conditions to generate personalised embryonic stem cells. These can then be used to grow cells-of-choice to replace those lost through disease, without fear of reprisals from the patient's immune system. The new study shows that the first of these steps is possible, even for very old people suffering from advanced disease.

More importantly, Dimos and Rodolfa have achieved the second step too; they converted the reprogrammed stem cells into motor neurons, the same cells that are affected by the donor's disease. This double-whammy of transformations is exactly the type of thing we need to realise the potential of stem cell therapies.

Skin to stem to nerve

The woman in question is named only as A29. Dimos and Rodolfa took skin cells from her arm and exposed them to the same quartet of transformative genes used by the Japanese researchers who pioneered the technique.

After two weeks, they found what they were looking for - small colonies of 'induced pluripotent stem cells', or IPS cells, that were very much like embryonic stem cells. They had the same, the same activated genes and the same proteins on their surface. Unlike their skin cells forefathers, they were actively dividing and divided into all the types of cells expected of embryos.

For their next trick, the team converted the IPS cells into a variety of different nerve cells, by using small molecules to stimulate two molecular signalling pathways. These triggered a programme of development that coaxed the IPS cells into becoming neurons. Dimos and Rodolfa confirmed the nature of their new cells by checking their shape under the microscope and staining them with a dye designed to only stick to neurons. About 20% of the cells had activated genes that singled them out as motor neurons, and mature ones at that. 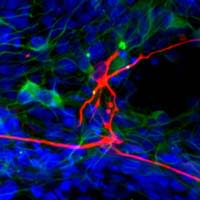 It's an important step, but it's not time to hang up the lab coats yet. The team still need to work out how similar these cells-formerly-known-as-skin-cells are to motor neurons that actually come from normal embryonic stem cells.

There are safety issues too - the reprogramming technique relies on using viruses to insert the four essential genes into the DNA of the adult cells. If the genes are shoved into places that disrupt other genes, it could set the cells down the road to cancer. That risk makes the viruses a big no-no; before stem cell therapies hit the big time, we need better methods for importing the relevant genes.

So there's still a way to go, but for the moment, there are more immediate benefits. As important as the study is for stem cell research, it's a veritable godsend for ALS research. The disease caused by the gradual death of the body's motor neurons - the cells that carry signals from the central nervous system to the muscles. Without these signals, the muscles of ALS sufferers gradually weaken and waste away. Voluntary movements become impossible, and in most cases, people lose the ability to swallow or breathe. It's a horrible disease that usually kills within 3 to 5 years.

So far, progress in understanding the disease has been relatively slow, mainly because it has been nigh impossible to obtain a decent supply of living motor neurons affected by the condition. But Dimos and Rodolfa's work changes all of that.

Now, researchers can culture large colonies of both motor neurons and glia that carry genetic defects associated with ALS. That gives them free reign to investigate the genetic defects that underlie the disorder, the environmental conditions that interact with these genes, and the way the affected neurons interact with other types of cell. It also provides them with neurons to use for screening and testing potential drugs. It's a starting pistol, and a loud one at that.

And just one more thing... 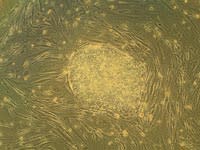 Another study published this week adds another twist to the stem cell tale and I'm going to touch on it briefly. Stem cells are notable for their ability to produce any type of cell in the body and it's this unique mass of potential that underlies their future in treating diseases. Other cells must settle for becoming more and more specialised as options for development become increasingly closed to them. It has always been thought that there was no going back for these cells, no way to regain their lost potential without the type of genetic manipulation I wrote about above.

But Molly Weaver and Mark Krasnow from Stanford University have proved otherwise. They have found that some cells in the fruit fly Drosophila are entirely capable of reversing the hands of fate and regaining their lost potential of their own accord.

During metamorphosis, when Drosophila transforms from squirming maggot to buzzing fly, most of its cells die. Its adult body is grown anew from stem cells in clusters of tissue called 'imaginal discs' clustered around its body. Or so people thought.

Using a jellyfish protein that makes cells grow a fluorescent green, Weaver and Krasnow followed the destinies of individual cells as the changing grew its new network of adult breathing tubes - their trachea. They found that many of these new cells come from the stem cells of the imaginal discs but others arose from a completely unexpected source - the larva's own trachea.

These fully specialised cells had reverted back to an earlier stage where they were capable to producing any of the myriad cell types that make up the trachea. Similar turnarounds have been seen in mammals, where so-called 'facultative stem cells' have been seen to revert to a more 'stemmy' state to replenish lost cells.

This discovery in a humble fly might seem irrelevant in the face of all the bold, headline-grabbing research with human cells but it could turn out to be very useful. In Drosophila, scientists can now have a model in which to study this phenomenon, and one that can be genetically manipulated with ease. The discovery could also be harnessed to develop ways of transforming adult cells into stem cells without the use of viruses and the cancer-causing potential that accompanies them.