Bringing ancient brains back to life may unlock clues into human brain evolution. 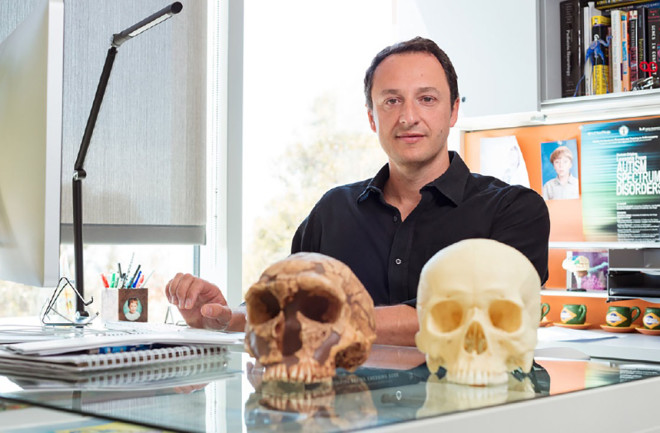 Alysson Muotri, a geneticist at the University of California, San Diego, leads one of the teams using ancient DNA and cutting-edge gene editing to create Neanderthal “mini-brains” — rudimentary, pea-sized organoids of our evolutionary kin, grown in petri dishes. The researchers hope to learn more about brain evolution and even when and how conditions such as autism and schizophrenia originated. | UC San Diego Health

For most of our history, Homo sapiens haven’t been the only humans on the planet. At least half a dozen other species are members of the genus Homo, all now extinct. Our closest evolutionary kin, Neanderthals, died off only about 40,000 years ago and shared many traits with us, including large brains.

Until recently, we couldn’t really get inside the heads of Neanderthals, except by studying the structure of their skulls and their artifacts, which can provide clues to cognitive processes. Now, at least two labs are growing Neanderthal “mini-brains” — rudimentary, 3D brain organoids roughly the size of a pea and grown in petri dishes from stem cells.

Organoid tech isn’t totally new. Scientists have been growing 3D versions since 2013, using them for things like testing pharmaceuticals and untangling the mysteries of early brain development. But the Neanderthal version is new. This particular organoid has only recently been possible, thanks to rapid advances in techniques used to extract ancient DNA from fossils, along with the rise of the gene-editing tool CRISPR. Researchers can use CRISPR to pop Neanderthal DNA chunks into the stem cells that spawn the organoid. Then, they watch the little “brain” grow.

Alysson Muotri, a geneticist at the University of California, San Diego, one of the institutions pursuing the work, presented his team’s preliminary findings at a UCSD conference in June. (The Max Planck Institute for Evolutionary Anthropology also has a team developing Neanderthal organoids.) His lab focused on our NOVA1 gene, a so-called master regulator gene that influences the expression of hundreds of others. When the team swapped in the Neanderthal equivalent of NOVA1, the organoids’ neural structure developed unusually, mirroring some of the developmental differences seen in people with autism.

But Muotri knows this isn’t even close to revealing how Neanderthals thought. They’re testing only one genetic mutation at a time, so they can’t know how multiple mutations would interact. The research has not yet reached the stage where it would be possible to test for differences in function. Then there’s the issue of how simplistic the model is: It can approximate development “that is similar to a newborn baby,” Muotri says, but “it is difficult to make conclusions about the adult brain.”

Limitations aside, he believes this work will eventually help us figure out how our brains evolved, and could even pinpoint the origins of brain diseases and disorders such as schizophrenia and autism.